Background and Objectives: Schools of medicine in the United States may overstate the placement of their graduates in primary care. The purpose of this project was to determine the magnitude by which primary care output is overestimated by commonly used metrics and identify a more accurate method for predicting actual primary care output.

Methods: We used a retrospective cohort study with a convenience sample of graduates from US medical schools granting the MD degree. We determined the actual practicing specialty of those graduates considered primary care based on the Residency Match Method by using a variety of online sources. Analyses compared the percentage of graduates actually practicing primary care between the Residency Match Method and the Intent to Practice Primary Care Method.

The population of the United States is facing an accelerating shortage of primary care physicians.1-3 Schools of medicine commonly report their primary care output as 100% of graduates who match in internal medicine, family medicine, pediatrics, and medicine-pediatrics residencies. This Residency Match Primary Care method (Match-PC) is commonly used by medical school deans and is widely cited in public media, routinely showing many schools producing 40%, 50%, or higher percentages of their graduates entering primary care. However, such data are known to be significantly overstated, being pejoratively termed “the Dean’s lie” by some.4-5 Previous studies have found only 21% of third-year internal medicine residents,6 10% of those entering internal medicine residencies,7 and 53% of pediatrics residents8 say they intend to practice primary care, as compared to 95% of family physicians applying for initial board certification.9

An adequate supply of primary care physicians is vital to the quality and cost-effectiveness of the US health care system,10,12 which lags behind the rest of the industrialized world as fewer health professions’ graduates choose primary care,13 despite the expansion of medical school class sizes.14

Given the breadth of information documenting that the shortage of primary care physicians in the United States is harmful, and the fact that medical schools are not adequately alleviating the shortage, it is essential that an accurate way to identify true primary care output be available for workforce planning. A more accurate point in time to determine who really chooses primary care practice is after residency completion. Determining which physicians actually practice primary care after residency completion can be difficult and tedious. Commonly used databases like the American Medical Association (AMA) database do not contain scope of practice information. This study is the first of its kind to:

This information and methodology will assist those responsible for health care workforce tracking and planning.

We conducted a retrospective study using a convenience sample of US schools of medicine granting the MD degree. We invited known faculty at 38 schools, including a detailed description of the study objective, data collection protocol, and shared data plan. Over the course of one year, 20 campuses from 14 universities agreed to participate. At each school, a collaborating faculty member provided the data. The target medical students were graduates between 2003 and 2014, to allow time for completion of residency and entry into practice. Graduate information obtained included residency match specialty, residency completion year, and current practice specialty. Total number of graduates per medical school during the time period were obtained from the Association of American Medical Colleges published data. To determine how representative these schools are of all US allopathic medical schools, we compared participating and nonparticipating schools by their published primary care production ranking.15 The institutional review boards at collaborating sites approved the study.

The definitions for primary care used in this study are outlined in Table 1. The Match-PC Method reflects how medical school deans and the media report primary care match data and excludes those in subspecialty residencies, surgery, emergency medicine, as well as transitional and preliminary internal medicine residencies. The definition used for Actual Primary Care is based on commonly accepted criteria, as exemplified by the World Health Organization16 and defined by the National Academy of Medicine as

the provision of integrated, accessible health care services by clinicians who are accountable for addressing a large majority of personal health care needs, developing a sustained partnership with patients, and practicing in the context of family and community.17

This definition excludes medical and surgical specialties that do not address the large majority of the patient’s health care needs. It also excludes urgent care, emergency medicine, and hospitalists because they do not aim for or provide a sustained continuity partnership with patients and families.

We created a new method, the Intent to Practice Primary Care Method (Intent-PC Method) that includes only those graduates who entered residencies in medicine-primary, pediatrics-primary, family medicine, and medicine-pediatrics.

We calculated descriptive statistics to determine the proportion of graduates designated as practicing in primary care by the Match-PC Method, Intent-PC Method, and Actual Primary Care Method both as part of the total sample and by individual medical school. Additionally, we completed sensitivity analyses to assess the impact of missing data on the proportions. We conducted all analyses using SAS v.9.4 or Microsoft Excel.

The majority of schools found most graduates using a generalized search method, through Google or Yahoo searches (Table 2). Schools may have used more than one search method for the same graduate if not all relevant information could be located with one.

The final study population consisted of 17,509 medical students from 14 institutions across 20 campuses (Table 3). Of these students, 7,206 were considered primary care by the Match-PC Method and were followed to determine their current practice type after residency completion. Medical schools included in the study were predominantly public universities (86%). Most campuses were urban (89%). Participating medical schools’ US geographic locations were: Northeast (1), Southeast (5), Midwest (4), and West (4). All but one institution provided data for 7 to 10 years of graduating classes. 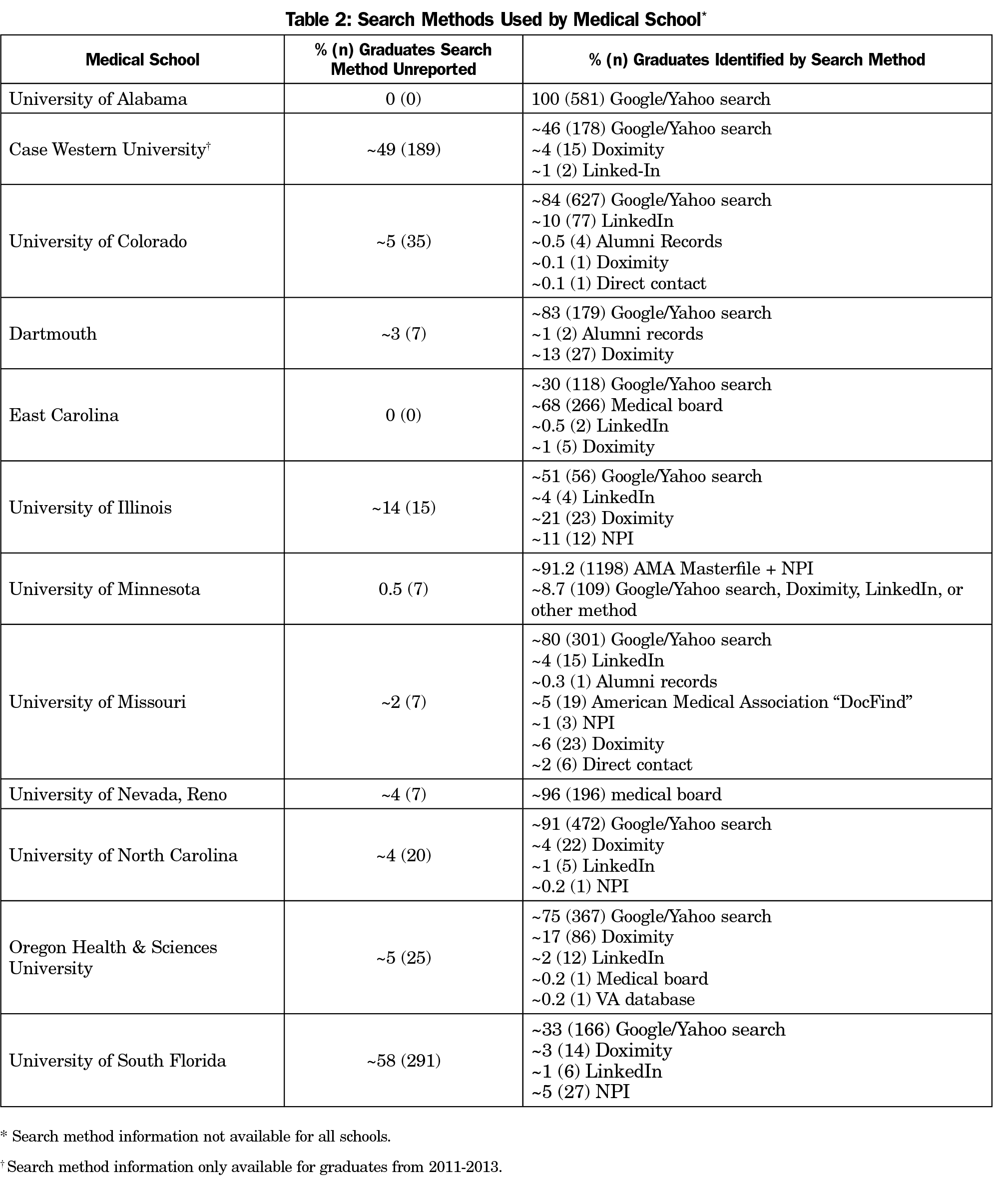 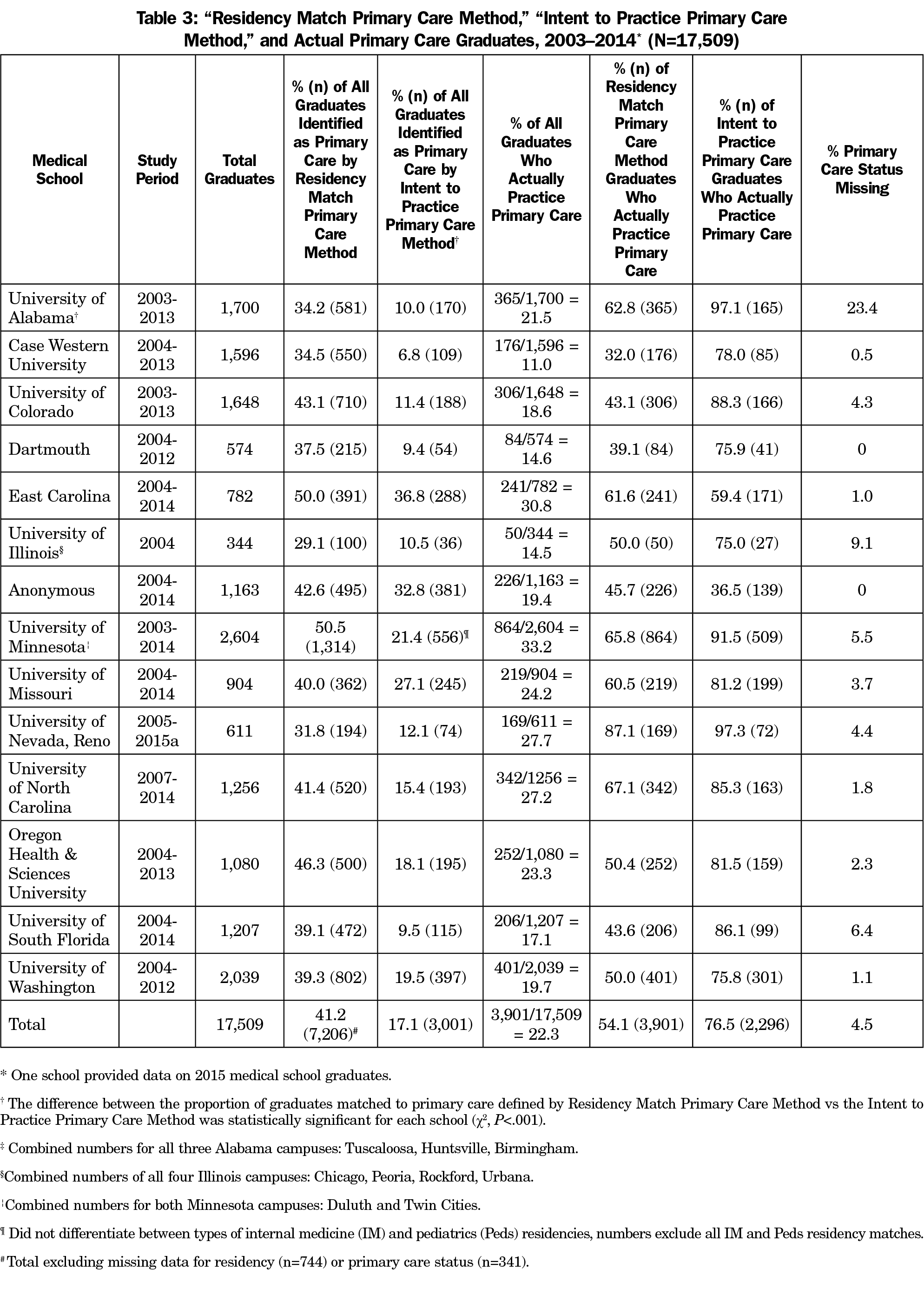 The goals of this study were twofold. First, we wanted to analyze a large sample of graduates from US schools of medicine and compare the actual primary care output at time of entry into practice to the primary care output commonly cited by deans and public media at the time of medical school graduation. Second, knowing that the Match-PC Method overestimates primary care output,4-5 we wanted to identify a more accurate and easily accessible method of predicting actual primary care output without the need to track graduates down at the time of residency completion and entry into practice. This more accurate and easily accessible method is Intent-PC, calculated by using only the medical school match categories of medicine-primary, pediatrics-primary, family medicine, and medicine-pediatrics. Of these categories, family medicine is the largest contributor to total Actual Primary Care workforce at 47.8%.

This study is unique in terms of the level of detail with which the actual practices of physicians were determined. The sample included over 17,000 graduates from 20 different medical school campuses throughout all regions of the United States, both private and public, and widely distributed across the spectrum of medical schools ranked previously15 for primary care output. Participating and nonparticipating schools were similarly distributed across published primary care rankings.

The Association of American Medical Colleges’ 2018 and 2019 reports attribute the accelerating primary care shortage to the trend of physicians, nurse practitioners (NPs), and physician assistants (PAs) entering subspecialties rather than remaining in primary care.18 Our findings confirm this trend for physicians. It is not the purpose of this study to address the relative roles of physicians, PAs, and NPs in fulfilling US primary care needs.

Our study has limitations. The final study population included only data from schools granting the MD degree, so results may only be generalizable to allopathic programs. Some previous studies have found that a higher proportion of graduates from osteopathic programs go on to primary care practice as compared to allopathic programs.21-22 Additionally, the vast majority (86%) of participating schools were public institutions. Previous research has shown that public universities may contribute more to primary care specialties such as family medicine as compared to private institutions.22 Both of these factors may have impacted the actual primary care rates observed in this study.

Although schools from most US geographic regions were included in the study, the Mid-Atlantic/New England region was the least represented, with only one Northeastern institution participating. It is possible that there are regional differences in rates of primary care physician production. However, the study sample was well-distributed among previously-published primary care rankings.15 Although small numbers in this study made subanalyses uninformative, future studies with larger sample sizes should seek to understand these regional differences.

Data on graduates ranged in source. Some information was obtained using specialized search engines such as National Provider Identifier and Doximity; others were identified using more general internet search engines, like Google. More recent graduates tended to have more complete online presences, such as through user-created professional profiles from LinkedIn. To assess how differences in search method may have impacted study results, we conducted a sensitivity analysis on 10% of the graduates missing an actual primary care status designation (analysis excluded schools that did not provide graduate names). These graduates were followed up using a general internet search to see if they could be identified. Overall, less than 10% of the missing graduates were located in this sensitivity analysis. Additionally, there was no significant difference by school in whether or not the sensitivity analysis findings matched the original findings (Fisher exact test P>.05). This lends support to the overall quality of the data, regardless of search method.

Because data were collected on graduates between 2003 and 2014, the point in time when practice type was determined may have influenced the study results. Individuals who graduated in 2003 were 15 years from medical school completion, as compared to those who graduated in 2014 or 2015 who were only 3-4 years out of school. It is possible some graduates who were in primary care practice at the time they were identified will later enter fellowships or residencies in subspecialties, or otherwise leave primary care, resulting in an overrepresentation of actual primary care physicians within this group.24-25

Our study is limited by missing data both in the original match information (9.0%) and in the follow-up information (4.5%). We determined the potential extent of bias on the proportions by imputing all missing values to practicing primary care as “Yes” and separately “No”; doing so only changed the proportions by 2.3%, thus showing the internal validity of the findings. Additionally, one participant did not distinguish between graduates who entered categorical or primary care residencies in internal medicine and pediatrics. The Intent-PC Method for this university was calculated excluding all internal medicine and pediatrics residents. To determine the impact that this lack of subcategorization had on this university’s results, we calculated a range based on the range of proportions graduates in internal medicine, primary care and pediatrics, primary care residencies across the rest of the sample. We found that the potential range of the proportion of graduates classified as Intent-PC for this particular university was 21.4% to 31.4%. This potential misclassification did not significantly change the regression findings and only increased the difference between the two primary care match methods, thus strengthening the conclusions of the study.

The authors thank all of the medical schools that participated and the medical students and research assistants who worked on the project. The authors particularly acknowledge James Leeper, PhD, University of Alabama; Susan Schmidt, MD, East Carolina University; and Randall Longnecker, MD; Ohio University, for their support, participation in the study, and data collection efforts; and Larry Green, MD, University of Colorado for his careful review of the manuscript.