Background and Objectives: Women have increased in presence within academic family medicine over time yet remain underrepresented among senior faculty. Mentorship is a mechanism by which senior faculty support scholarly achievements, accelerating advancement of junior faculty.

Methods: We analyzed 10 years (2008-2017) of original research articles in three peer-reviewed family medicine journals. We examined first author/last author pairs by gender as a proxy for mentorship of junior faculty by senior faculty. We compiled family medicine faculty data across 9 years to compare trends in scholarly mentorship with faculty advancement.

Conclusions: Despite disproportionate rates of last authorship and senior faculty positions in family medicine departments, senior female authors have equal if not greater rates of mentorship of female first authors in family medicine literature. The increase in first authorship, last authorship, and faculty position indicates that improvements have occurred in gender advancement over the study period, but gains are still needed to improve gender equity within the field.

Though the rates of women in academic medicine continue to increase, gender disparities persist. Women remain underrepresented as authors in the peer-reviewed academic medical literature and in leadership roles. Within family medicine, one of the largest physician specialties, less than 40% of professors are women, and fewer than half of first and last authors in major family medicine journals are women, although their presence is increasing.1-3 The presence of female leaders to serve as mentors and role models is important in the institutional advancement of women in academic medicine. Mentorship broadly refers to the “dynamic reciprocal relationship between an advanced career incumbent (the mentor) and a junior faculty member (the protégé) aimed at fostering the development of the junior person/protégé.”4 Mentoring may also be confined to one aspect of career development such as scholarly publication only. In gynecology, for example, peer-reviewed scientific papers with senior female authors were more likely to have female first authors, suggesting a mentorship role.5 This study examines first author/last author pairs in peer-reviewed articles to observe whether differential rates in mentorship exist between male and female authors in academic family medicine.

Female matriculation into medical school has greatly increased over the years. Just 5.5% of medical students were female in 1950 compared to 47% in 2014.6 In the 2019-2020 academic year, 52% of the matriculants of US medical schools were female.7 In concordance with this, the proportion of women in the physician workforce has grown from 6% in 1950 to 36% in 2015.6 Despite the rising number of women in medicine, disparities in female representation exist in different fields including academic medicine, which encompasses all medical specialties.

The Association of American Medical Colleges (AAMC) found that 75,108 women were full-time faculty in 2018 compared to 103,435 male faculty.8 Of the female faculty, 12.9% were full professors whereas 27.6% of male faculty were full professors.8 In family medicine, there were 5,263 full-time medical school faculty in the United States in 2017. Of the 736 with full professor rank, 265 were women (36.0%).1 The cause of these disparities is undoubtedly complex and multifactorial. However, a possible factor may relate to one specific aspect of academic medicine: scholarly publication.

Several studies have found major differences between men and women publishing in peer-reviewed scientific literature across academic medicine. These differences have ranged from women being underrepresented in leadership roles to women being less likely to compose or publish manuscripts.9-13 In family medicine, female authorship in three major family medicine journals has increased in the last decade, but there is still a gender gap in senior authorship.14

Gender differences in scholarship are relevant to the gender gap among academic senior faculty positions.15 Scholarship is a key component of faculty appointment and promotion. The importance of generating new knowledge is clear when reviewing institutions’ academic promotion handbooks.16 This includes publication in peer-reviewed journals, with article first authorship given significant weight. In academic medicine, the last listed author is usually reserved for the most senior person on the project. Further, it is typical for the most senior person on the team to act as a mentor to the team, including to the first author. Mentorship is often helpful in ensuring more junior researchers have a productive career.17

Given the evidence of inequity in leadership among women in academic medicine, mentorship of female junior faculty is especially important. Mentorship has been proven to result in higher satisfaction and retention of women in academic medicine.18,19 Shared experiences and role modeling are important in the mentor-mentee relationship. A study of National Institutes of Health K08 and K12 award winners found that mentees with gender-concordant mentor-mentee pairs reported higher rates of viewing their mentor as a role model. Female respondents in the study reported higher rates of issues with work-life balance overall, and all respondents reported that female mentors were more likely to give advice on work-life balance.20

This study examines whether female senior authors are more likely to publish with female first authors in high-impact family medicine journals over a 10-year period. Additionally, we examine female representation in family medicine faculty positions. This investigation fills a gap in the literature regarding publication and mentorship among women in academic family medicine.

We used publicly available data from Ovid Medline to obtain all articles published in 2008-2017 in Annals of Family Medicine, the Journal of the American Board of Family Medicine, and Family Medicine. We excluded American Family Physician because a majority of the articles are classified as review articles as opposed to original research. Medline organizes articles into over 100 different categories. We developed exclusion terms to narrow our search results to original research. For example, we excluded terms such as “editorial” and “news.” See Supplemental Digital Appendix 1 (https://journals.stfm.org/media/3613/supplemental-digital-appendix-1-wilkinson.pdf) for a full list of exclusion terms.

We used publicly available data from AAMC that includes proportion of female faculty and rank specific to the field of family medicine for various years. We found complete data for years 2009, 2012, 2015, and 2017, which overlapped with years for which we collected authorship data.2,17-19

We determined the gender for first and last authors listed on articles from our search. This is aligned with other published bibliometric analyses that examined gender differences in authorship.24,25 For articles with only one author, we counted that author as first author. This is aligned with the commonly accepted idea in academia that the first author is traditionally the author that contributed most significantly. Some articles from our search included an organization as a last author, for example a sponsoring organization that provided funding; in this case, we counted the individual author listed last as “last author.”

For all sample years 2008-2017, we ran names of first and last authors through a program developed at the Robert Graham Center that assigns gender using US Social Security birth records from 1950 to 2000 combined with a world-wide name dictionary. We coded names as male or female if they had been assigned to the respective gender in at least 60% of instances in the US Social Security records. The gender for names that could not be identified via the automatic coding were manually assigned using two rounds of reviews by study authors with a third round of reconciliation, conducted through Google searches and examination of institutional websites.

We calculated the proportion of publications with male or female first authors by gender of the last author. We repeated this for each year from 2008-2017 and for the overall sample. We used a χ2 test to observe differences in first author gender by last author gender. We used the Cochran-Armitage trend test to measure the significance in the proportional trends over time for gender composition by faculty position. Significance was set at a P value of .05. We used Stata (version 14.2, Stata Corp, College Station, Texas) for analysis. The American Academy of Family Physicians Institutional Review Board determined this study was exempt from formal review. 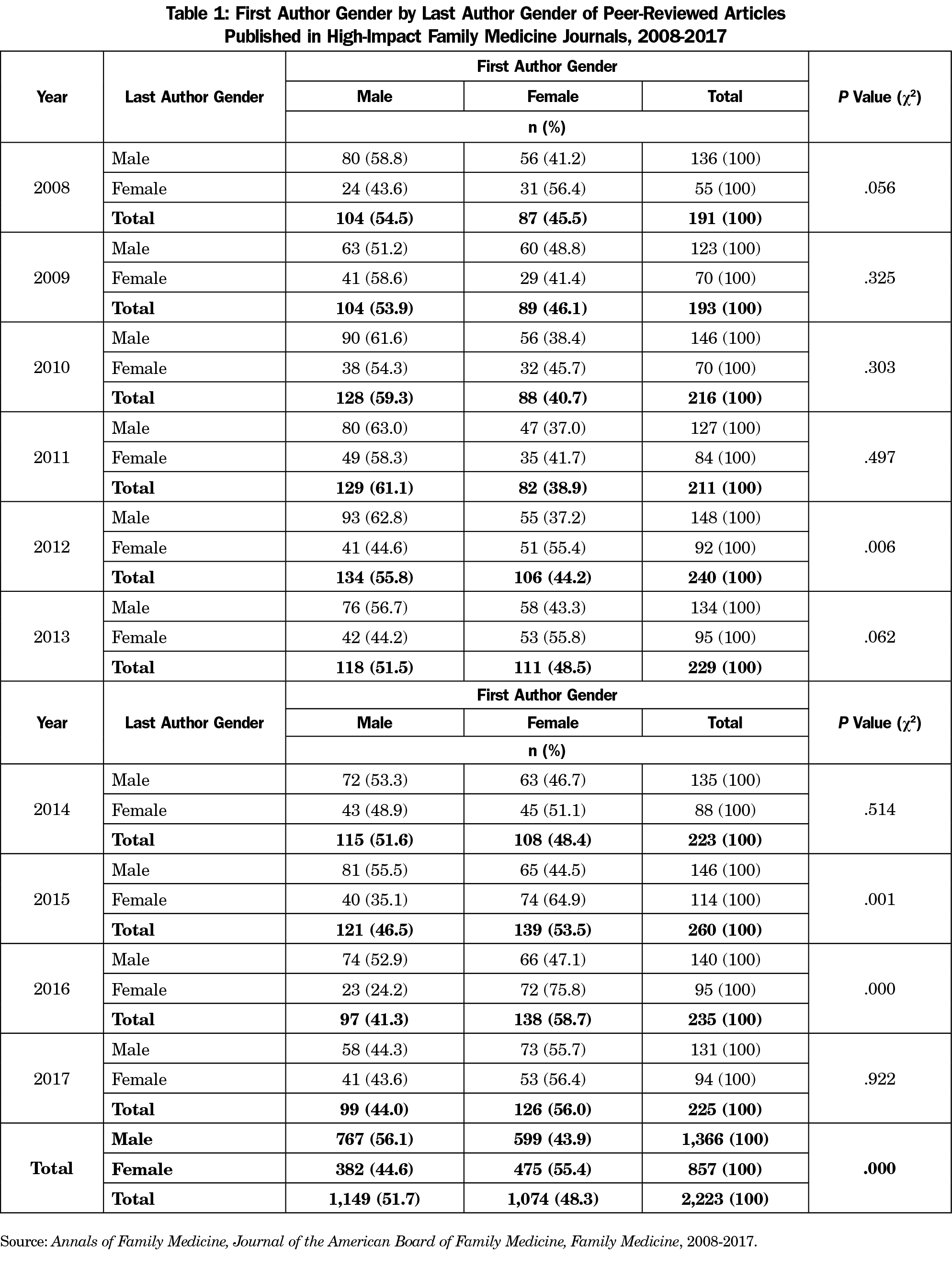 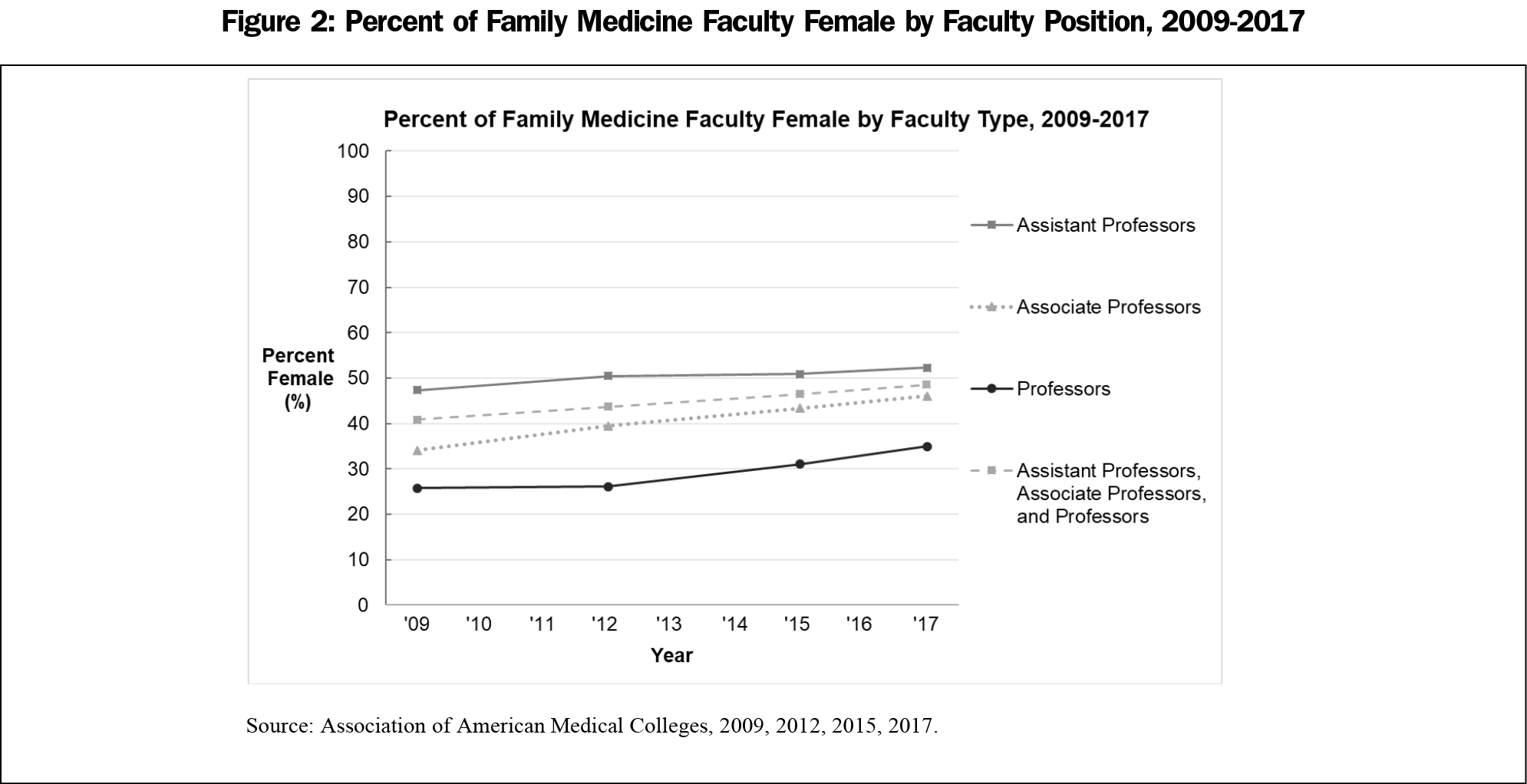 Regarding academic faculty in family medicine departments, rates of women in full professorship are increasing over time, but hace not yet reached 50%. Given that a large proportion of scholarship in the form of peer-reviewed publications occurs in the academic setting, it is important to consider the makeup of these institutions when conducting a bibliometric analysis of this kind. Overrepresentation of males among senior family medicine faculty may help explain why female first authors paired with senior male authors appears to have increased over time.

This study has several limitations. First, whether or not first author/last author pairs can be used as a proxy for mentorship is logical but debatable. However, others have suggested it may be a fair proxy.5 While the last author is often the most senior and most directive throughout the publication process, that author may not be the person providing the most impactful mentorship to others in the research group (nor the person providing mentorship around issues apart from scholarly publication). More evidence is needed to determine actual physician-researcher attitudes and beliefs around mentoring, especially because academic clinical departments may have different attitudes compared with traditional biomedical departments. Second, the study covered a 10 year period. Going back further in history may lead to different observable trends. It would be helpful to continue to collect this data moving forward to observe future trends. Third, while the three journals studied are family medicine journals, given the breadth of the specialty, family medicine researchers are publishing in other journals. Conversely, these staple family medicine journals also include researchers from other specialties related to primary care, not just family medicine. Regardless of these limitations, these three journals are high-impact and used by family physicians and departments on a regular basis and are thus still representative of the field.

Many studies have examined the gender gap in authorship,9-15, 20,21 and literature on gendered experiences in medicine and academia point to mentorship of women as one possible solution to address gender disparities in the field.18 Although mentorship from any gender is important, there is also literature suggesting that it is important for early-career women to see other women in leadership and mentorship positions.26 Academic institutions and researchers need to be attentive to these trends in senior female mentorship of junior women. As we work toward closing the gender gap in academic medicine, it is important for institutions to foster environments that allow for the advancement of women, including mentorship by other women.