Background and Objectives: Many United States military personnel are not full-time service members. Because of their part-time service, these veterans may not self-report their military service during medical visits. Consequently, past military service can be overlooked when taking a social history. We developed a case to provide preclinical medical students patient interview experience wherein the diagnosis relied on identifying past military service. Our objective was to determine if medical record write-ups included social history details about occupational information after this innovation.

Methods: We conducted this case discussion in small groups during year 1 of medical school. We analyzed clinical skills examination write-ups before and after the case discussion to determine if the social history included occupational issues.

For 2 decades, the United States military has been involved with conflicts around the world. Many military personnel are part-time service members, consisting of Reserve or National Guard forces.1 These veterans may not identify as part of military culture,2,3 their service may not be brought up as a normal part of the medical history. Additionally, the growing number of women serving is also overlooked.4

Connecting aspects of service to a medical condition facilitates appropriate care.5,6 For many US medical students, clinical rotations at a Veterans Administration Medical Center (VAMC) exposes them to these conditions. However, not all veterans access care at a VAMC and not all medical schools are affiliated with a VAMC. With the increasing numbers of veterans, medical schools need to prepare students for veteran care.2

Military medicine educational modules have been developed;9-11 however, they primarily focus on mental health issues. Therefore, we developed a patient case wherein the diagnosis relied on identifying past military service. Our objective was to determine if medical student write-ups following a standardized patient encounter included a more extensive social history on the Objective Structured Clinical Exam (OSCE).

Our Patient Centered Care course teaches preclinical medical students essential clinical skills in small groups of seven or eight students with a practicing physician (tutor). Groups meet for 3 hours every week the first 3 semesters (18 months) of medical school. Each session introduces a new skill students practice along with case-based clinical reasoning, which is coached by tutors. At the end of each semester, a comprehensive OSCE utilizing standardized patients is given to students.

Medical students and faculty members from the military medicine interest group partnered with course leaders to write a case of a soldier suffering from chronic cough between deployments. Members of the military medicine interest group were all veterans. The case was constructed to provide thorough, realistic detail of the soldier’s experience including work duties that led to environmental exposure.

Tutors were trained on the military case and had the opportunity to clarify relevant details during their weekly meeting. In small groups, medical students interviewed their tutors, who were portraying the veteran. Students constructed a differential diagnosis. After discussion of their diagnosis, tutors provided the case details to identify missed elements. As a group, they were able to identify key details important for their reasoning and clinical decision-making.

During 2018, the preintervention OSCE was improved (28 of 191). Only two students from the first OSCE included occupational connections postintervention, but there were more unique entries across each succeeding OSCE (Figure 1).

Although both cohorts had fewer documented occupational health concerns in the third OSCE, both groups showed improvement postintervention. In comparing the first OSCE to the final, the cohort in 2017 was significantly improved (t=2.79, P=.006). 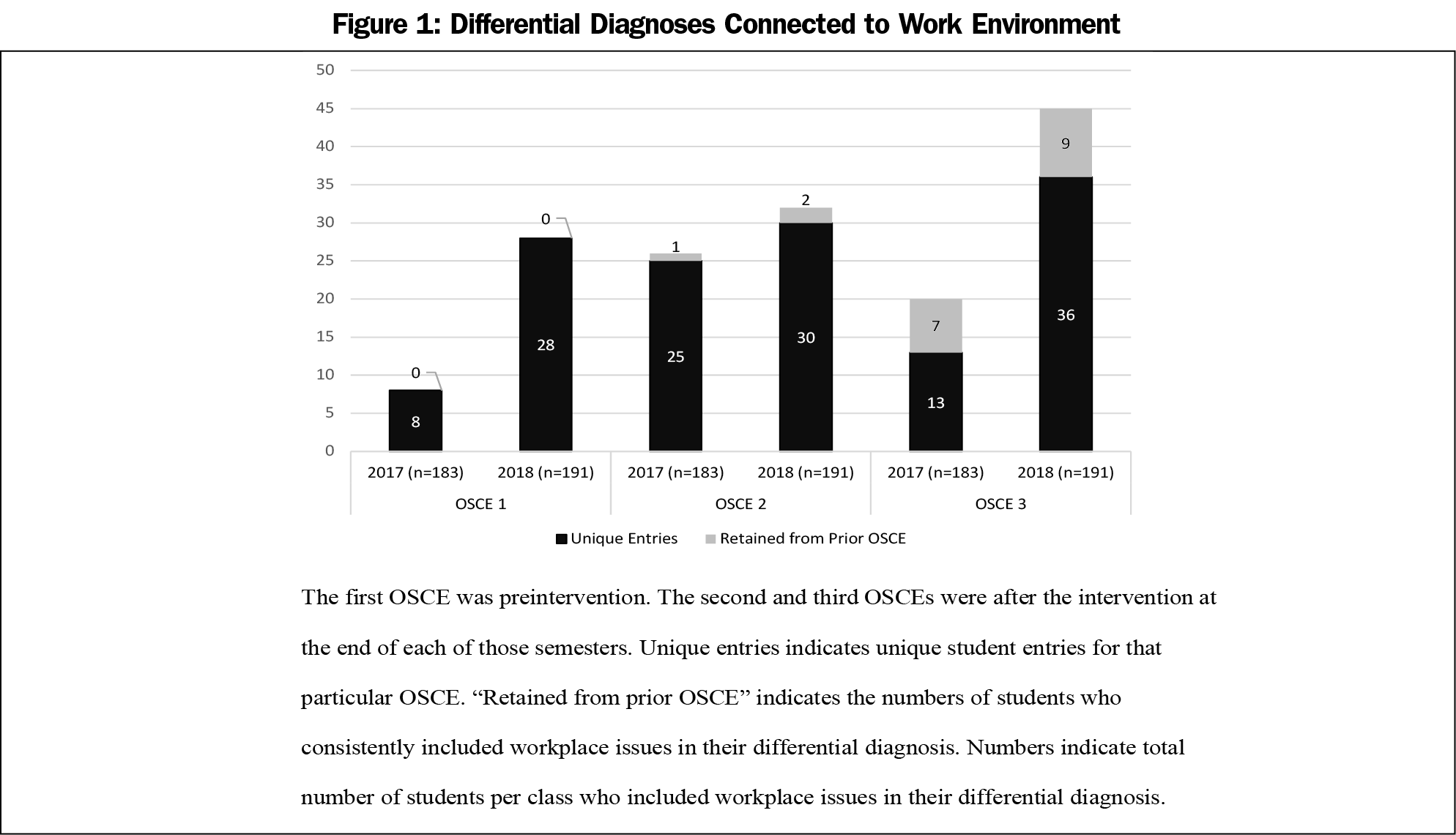 We had hoped to see continuity from OSCEs two and three after the intervention. However, that did not occur. We can only speculate that the students focus solely on topics they learn during the semester, which may have resulted in a decline in the 2017 cohort. As additional case discussions in the preclinical material are introduced, we need to be more deliberate practicing good interviewing habits for every case, which would include asking expanded social history questions.13

To our surprise, students in the 2018 cohort included occupational concerns at a much higher level for each OSCE. This may be in part that there were new facilitators for small groups in 2018 who emphasized the social history during small groups. Additionally, the 2017 cohort may have influenced the 2018 students with informal advising.

Although this is a single institution study, our subject matter experts (medical student and faculty veterans) helped write a thorough case that exposed students to not only a thorough medical history but also occupational exposures. Although not equivalent to military service, we used occupational exposure as a proxy in the expanded social history, which was the higher-order goal for this session. Additional military cases could be developed by other institutions, particularly if a veterans’ hospital is not readily accessible.

In the future, an OSCE is being developed that more deliberately includes military health issues could provide a more accurate evaluation of the ability of students to connect military history with diagnoses. We can also collect student impressions of these cases.

This study demonstrates the importance of teaching medical learners to include military service when taking a social history. This military case-based discussion provides an effective mechanism for medical students to broaden their understanding of the social history and make connections between occupation and health.