Results: Physicians reported engaging in shared decision-making for prostate cancer screening in half of eligible men. Only 29.2% of physicians reported routinely informing Black men of their increased prostate cancer risk. In logistic regressions, physician gender (female) and fewer Black patients in panel (<25%) were associated with lower frequency of shared decision-making with Black patients. Physician age (<40 years) was associated with not discussing race during screening discussions (OR 2.24, 95% CI 1.55–3.23).

Educating patients and practitioners about prostate cancer screening is challenging due to frequently evolving guidelines and the different recommendations from different professional medical societies. The USPSTF released a controversial summary statement in 2012 that American men should not receive routine PSA-based screening for prostate cancer.9 This position was changed in 2018 with the USPSTF recommendation that all men aged 55-69 years should make a personal decision about screening after being informed about the benefits and risks.8 These new recommendations were largely based on data from two large studies that showed that prostate cancer screening does confer a slight mortality benefit, but is associated with several potential harms as well.10,11 However, these studies lacked adequate representation from Black and other minority participants.

Data were gathered and analyzed as part of the 2020 Council of Academic Family Medicine’s (CAFM) Educational Research Alliance (CERA) survey of practicing family physicians. CAFM is a joint initiative of four major academic family medicine organizations, including the Society of Teachers of Family Medicine, North American Primary Care Research Group, Association of Departments of Family Medicine and Association of Family Medicine Residency Directors. CAFM members were invited to propose survey questions for inclusion into the CERA survey. Approved projects were assigned a CERA Research Mentor to help refine questions. The final draft of survey questions was then modified following pilot-testing.

The American Academy of Family Physicians Institutional Review Board approved this study in January 2020.

We selected participants based on membership type in one of the CAFM organizations. We then limited the pool to exclude program directors, clerkship directors, and department chairs, based on the most recent survey of those groups. Additionally, the survey contained qualifying questions to ensure only practicing physicians were surveyed. Invitations to participate in the study included a personalized greeting and a letter signed by the presidents of each of the four sponsoring organizations with a link to the survey, which was conducted through the online program Survey
Monkey. Nonrespondents received five requests to complete the survey; the final request was sent 2 days before the survey was closed. The survey was delivered to a final sample of 3,665 family physicians between January 15, 2020, and March 2, 2020.

We conducted analyses using SPSS software, version 25.13 We used univariate analysis of frequency distribution for all questions. We conducted bivariate analyses comparing responses to the questions by demographic characteristics (race, gender, age, size of community), using either a Pearson χ2 test or Fisher exact test based on sample sizes. For the purpose of analysis, we stratified gender into binary categories of male and female and we separated age into groups of ages 20-39 years, 40-59 years, and 60 or more years. We divided the variable for percent of patient panel that is Black into 0%-25% and 26%-100% groups because the majority of physicians had panels with fewer than 25% Black patients. This 25% threshold for dichotomization has been previously cited in the literature.14 We asked independent questions about prostate cancer screening approach in Black patients and non-Black patients. We conducted χ2 analyses including only the respondents who answered questions for both populations of patients so that statistical significance could be calculated. Finally, we performed both univariate and multivariate analyses for questions pertaining to screening approaches specifically in Black patients. We performed separate logistic regression models for the following four dependent variables: (1) rates of engaging in decision-making conversations, (2) rates of PSA screening, (3) presence of barriers to decision-making conversations, and (4) engaging in race-specific conversations. For each of these models, we included physician age, physician gender, and percentage of Black patients in panel as independent variables and calculated crude odds ratios. These independent variables were selected a priori as factors that we hypothesized would impact approach to prostate cancer screening in Black men. We did not include race or ethnicity of the physician in the models due to small sample size. We subsequently adjusted each logistic regression model for physician age, physician gender, and percentage of Black patients in patient panel to calculate adjusted odds ratios. All three independent variables were included in the regression model, regardless of their P value in the crude analyses. 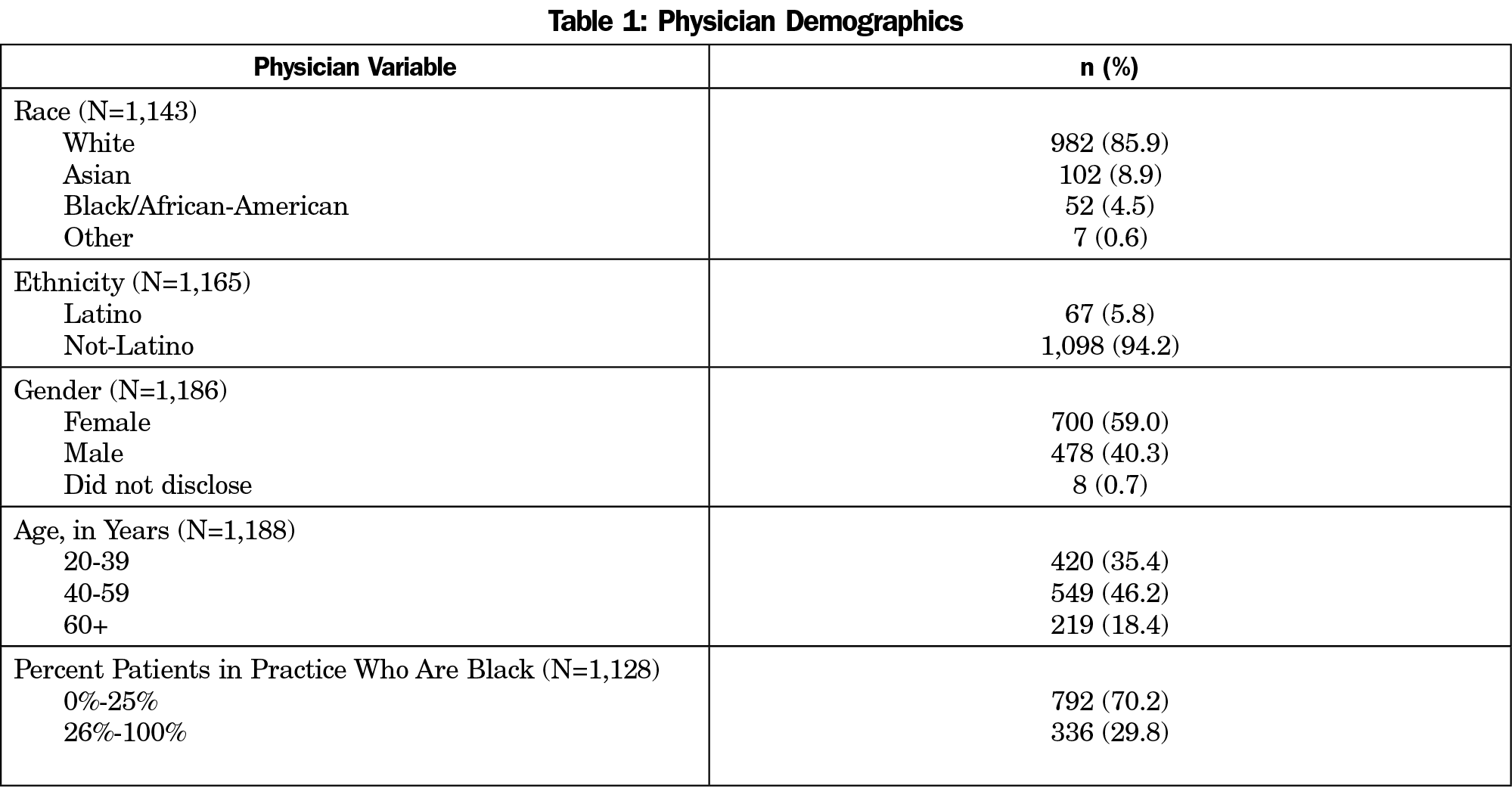 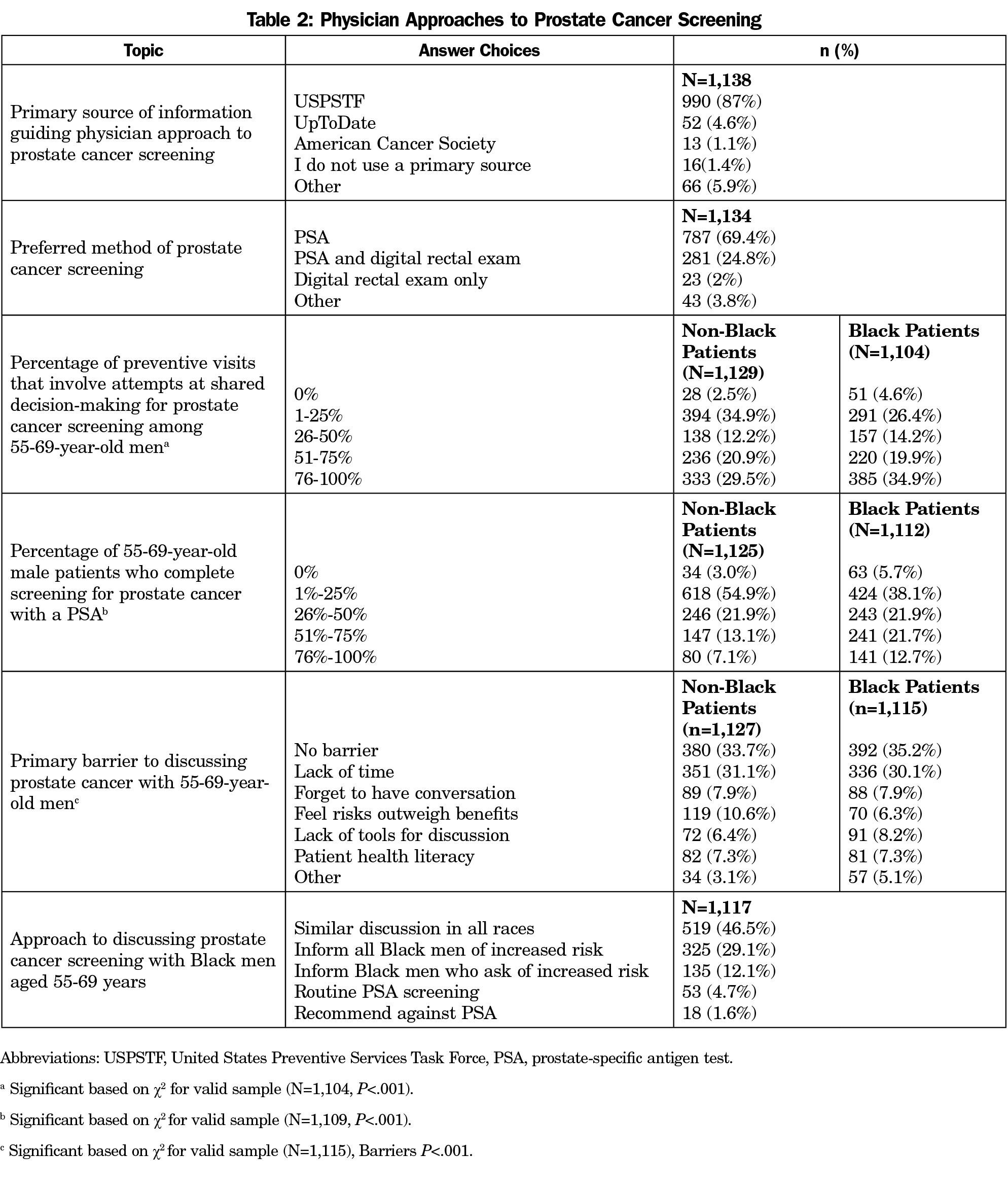 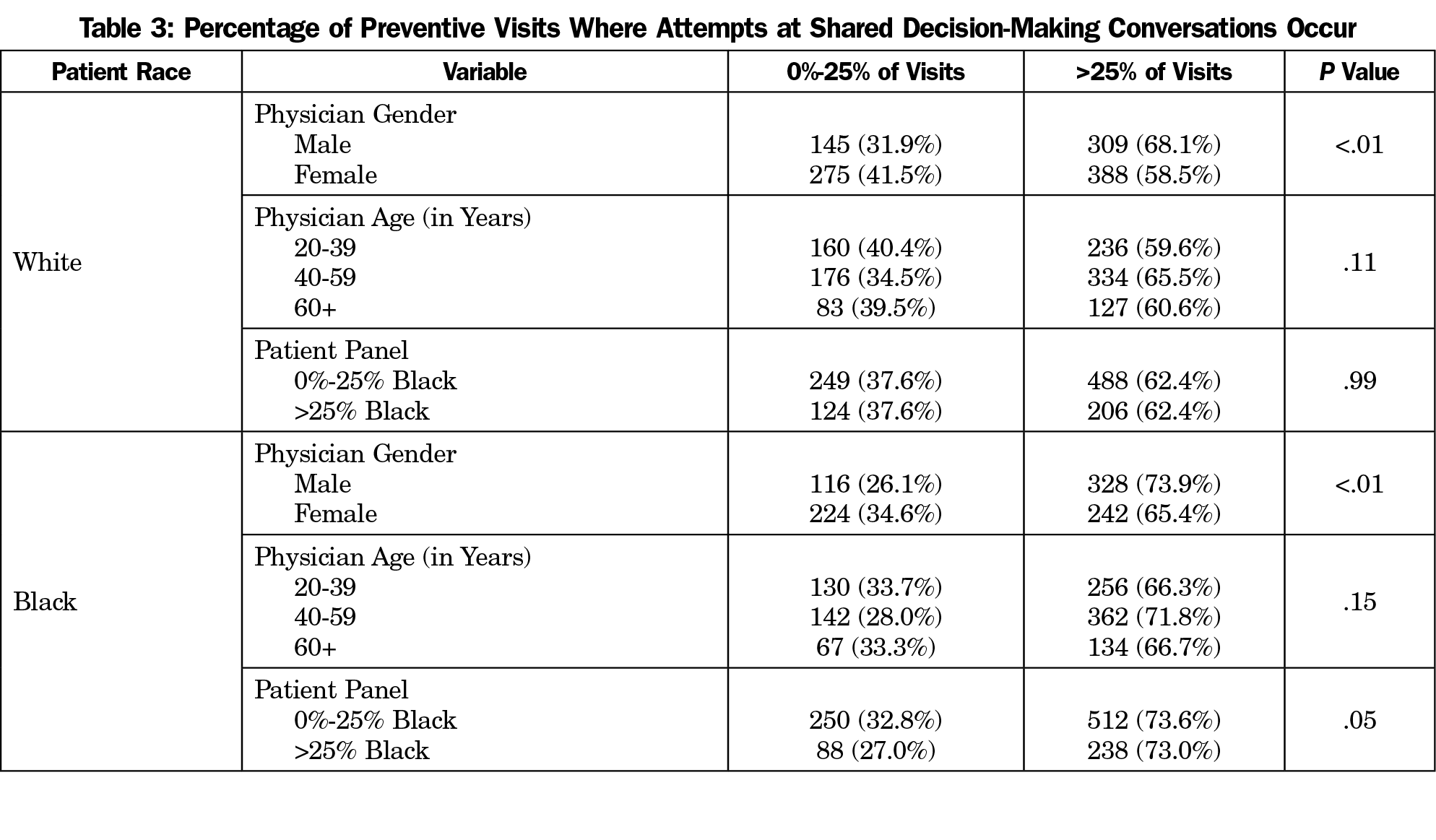 For Black patients, slightly more than half of physicians (54.8%) engaged in shared decision-making conversations about prostate cancer screening at the majority of their preventive visits. The most common response was that 76%-100% of preventive visits involve shared decision-making conversations about prostate cancer screening (34.9%), and that 1%-25% of patients complete PSA screening (38.1%). The most commonly-cited barriers to PSA screening conversations with Black patients were time (30.1%) and lack of tools to facilitate the discussion (8.2%). About one-third of physicians (32.9%) perceived no barriers to PSA screening. 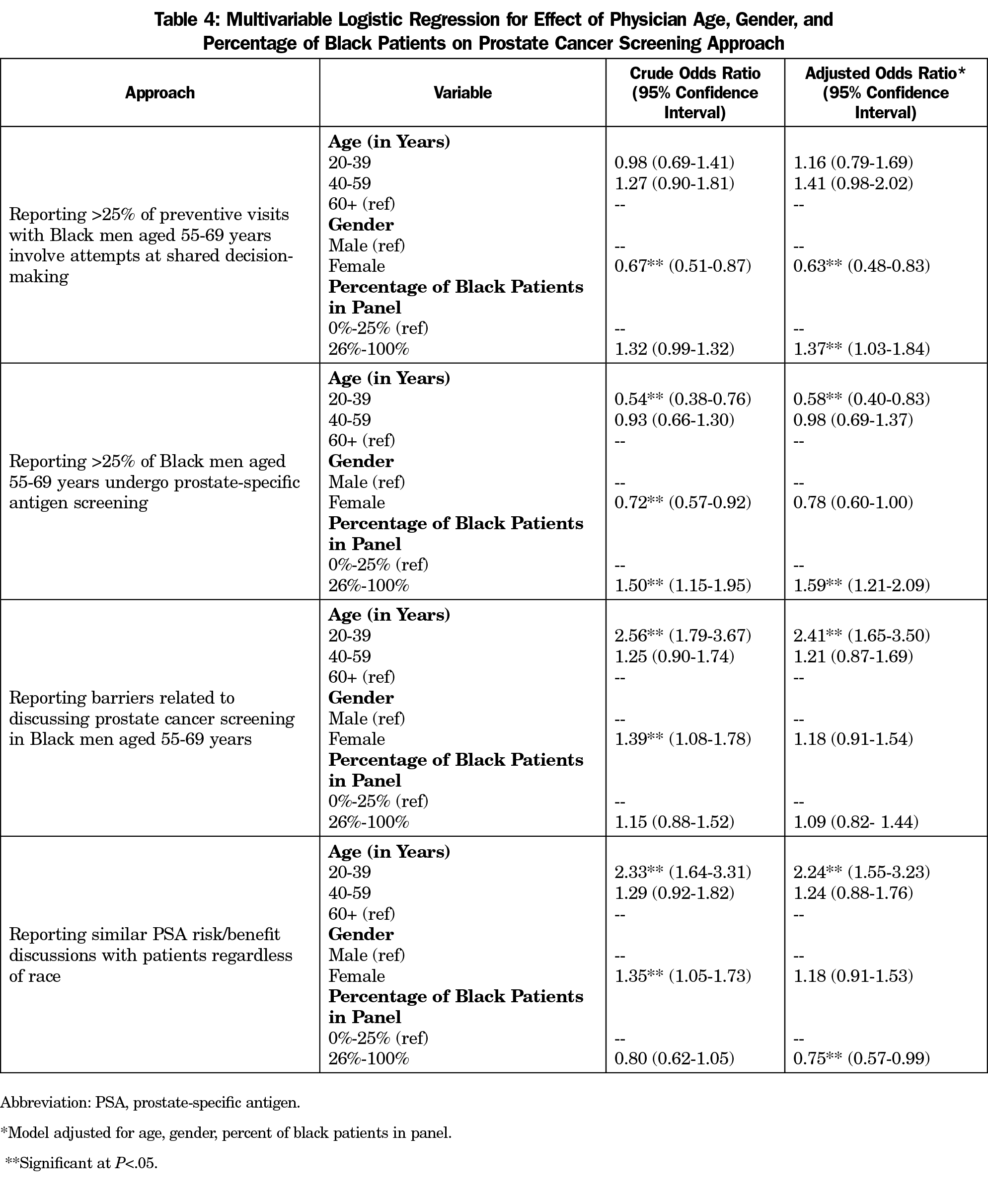 Finally, our finding that physicians who cared for higher proportions of Black patients were more likely to engage in shared decision-making conversations with them may be explained by physicians with lower proportions of Black patients having less proficiency with these conversations or placing a lower value on them. Conversely, physicians who do not engage in shared decision-making conversations with Black patients may end up with smaller panels of Black patients because these patients choose to see other physicians. In either case, this finding builds on previous literature that clinical exposure to racial minorities and cross-cultural experiences improves likelihood of practicing in diverse communities and providing culturally appropriate care.20-23 This finding stresses the importance of learners participating in clinical encounters with Black men. Training sites lacking significant numbers of Black patients should make targeted efforts either in person or virtually to educate learners about approaching prostate cancer screening in Black men.

The authors thank Carole Berini (MUSC) for her assistance with data analysis.