Results From a National Survey

Conclusions: The results demonstrate that family medicine residency coordinators are generally satisfied with their work and reported moderate to high degree of burnout rates.

Residency coordinators play a pivotal role in graduate medical education. They are often the first people residents contact for information. Residency coordinators’ duties include supporting and meeting regularly with program directors and faculty, maintaining databases that contain resident and faculty data, and providing administrative support to residents and fellows. In addition to their administrative duties and responsibilities, evidence suggests that family medicine residency (FMR) coordinators spend an average of 6 hours each week providing emotional and social support to residents.1 Thus, FMR coordinators have multiple roles and often work in an environment that can be stressful.2,3 There are variations in the job title of FMR coordinators including program manager, residency manager, and academic coordinator. For consistency purposes, “FMR coordinators” is used here to refer to all the coordinators irrespective of their job title.

The residency program coordinators’ administrative responsibilities have changed over the years in response to resident work hour restrictions and the Accreditation Council for Graduate Medical Education’s (ACGME) Next Accreditation System (NAS) that emphasizes more outcomes-based resident evaluation, among other aims. This shift in policy has led to the redefinition of the professional responsibilities and requirements of coordinators as essential members of the management team.4

While residency program directors are responsible for the educational portion of the training programs, the NAS has increased the administrative responsibilities of coordinators.5 Increased job responsibilities and duties are associated with increased job stress when there is an inadequate level of institutional support.6,7 In a 2016 study of directors and coordinators of general surgery residency programs, Fountain and colleagues documented an association between additional
ACGME accreditation requirements and burnout among coordinators.6 A review of the literature indicates little information regarding coordinators’ expanded roles and responsibilities with the new ACGME requirements. Given the expanded roles and responsibilities, we wish to study FMR coordinators’ job satisfaction and work-related burnout. Job satisfaction is the pleasure people derive from their work, including their ability to positively affect the lives of people through work.8 Burnout can reflect the feeling people have that their efforts do not make any difference. It can also be associated with a “very high workload or a non-supportive work environment.”9

A 2013 survey by the University of Utah Graduate Medical Education office found that of 56 coordinators from 21 specialties, including an FMR program, 72% reported they were overwhelmed with job duties and 39% considered resigning from their positions.10 Long-term exposure to work-related stress11,12 and low job satisfaction13,14 have been found to be associated with burnout. Given the negative effects of burnout, the
ACGME has intensified efforts in promoting wellness among physicians in the clinical learning environment.15 These efforts have not been formally extended to residency coordinators despite their contribution to medical education. To our knowledge, there are no job satisfaction and burnout studies involving FMR coordinators. Therefore, this study sought to:

This nonexperimental, cross-sectional, national wellness study included data on 307 FMR coordinators who were members of the Association of Family Medicine Administration (AFMA). Study participants completed an anonymous, 39-item online survey that included some modified questions from the Professional Quality of Life Scale (ProQOL) Version 58 and questions used to construct a demographic profile of the participants. The ProQOL is used to measure the negative and positive affects of people in helping positions. FMR coordinators fall within this category given that they provide a significant amount of emotional support to residents1,2 in addition to their administrative duties. The ProQOL research questions used in this study were formatted to better fit the study population, and were modified to suit the purposes of the study. The University of Kansas School of Medicine-Wichita Institutional Review Board granted exemption for the study. A sample size of 300 was calculated as necessary for adequate power (>.85) to detect significant correlations of 0.5, P<.05 between variables.16

Burnout: The modified burnout scale of the ProQOL was used to investigate the participants’ work-related burnout rates. The scale consists of 10 questions. Participants recorded how often they experienced specified work-related feelings using a 5-point Likert scale ranging from “never” to “every day.” Five of the items were reverse-scored. The 10 items were summed up into burnout scores, which were standardized using a mean of 50 and standard deviation of 10.8,9 Higher degree of burnout is one in which respondents reported higher scores. Consistent with convention,8,9 a score under 44 was defined as low, 44 to 56 as average, and over 56 as high on the burnout scale.

There are 566 accredited FMR programs nationally.17 For logistical reasons (such as our inability to know the total number of the FMR coordinators and their contact information), the current study only included FMR coordinators who were active members of AFMA at the time of the study. AFMA is a professional organization dedicated to the professional growth and development of FMR coordinators. The authors used SurveyMonkey to host the survey, and a generated link was sent via email to all 429 registered members of AFMA in all the 50 states in the United States. Two reminders were subsequently sent to those who had not completed the survey. Data were collected between April 2017 and July 2017.

Of the 429 FMR coordinators surveyed, data were collected from 307, for a response rate of 72%. As shown in Table 1, 97% of the participants were female and 51% reported being in their current job for 5 years or less. Fifty-four percent were working in community-based, medical school affiliated programs. The chi-square tests showed no significant relationship between participants’ gender, job satisfaction, and burnout. 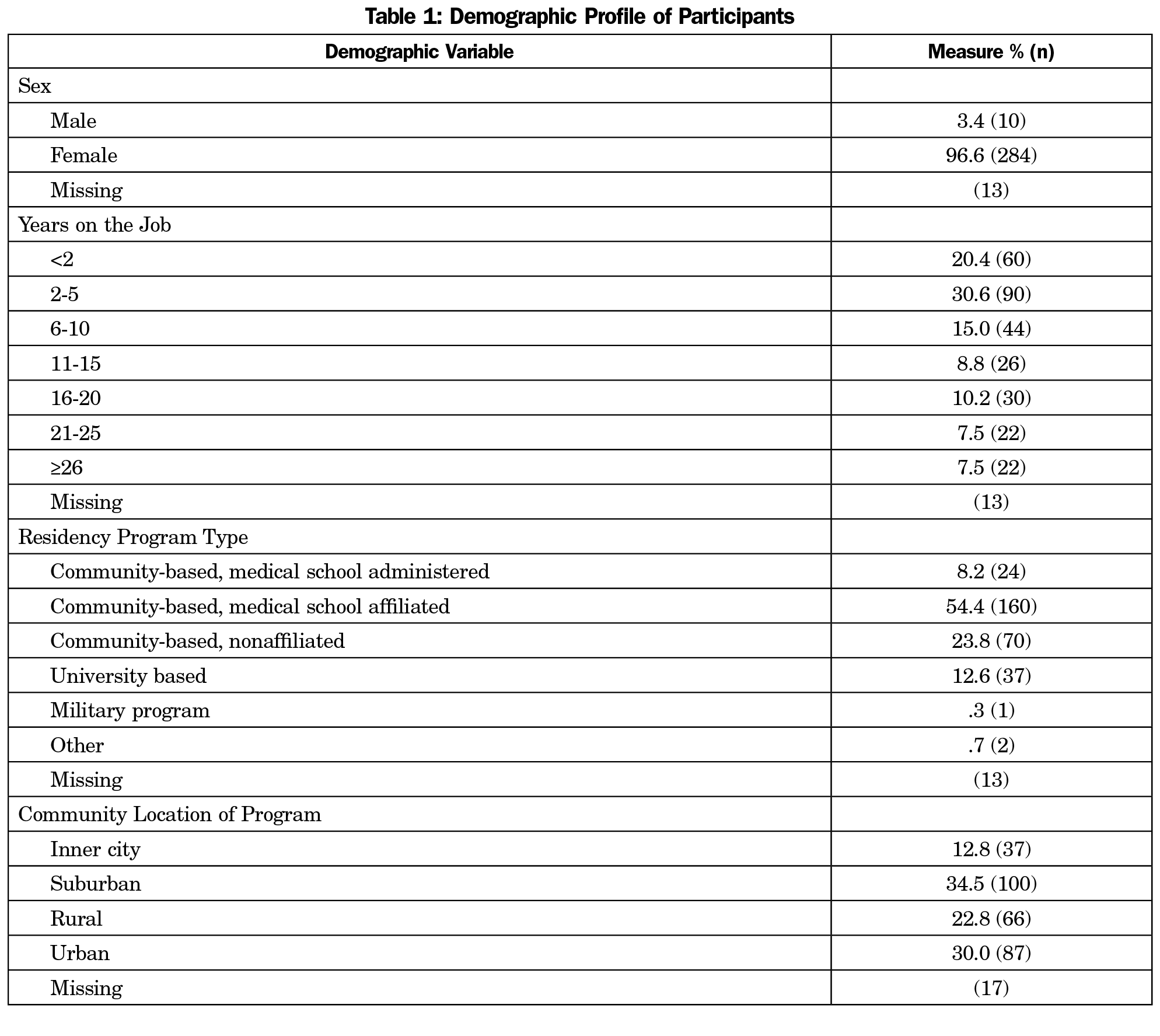 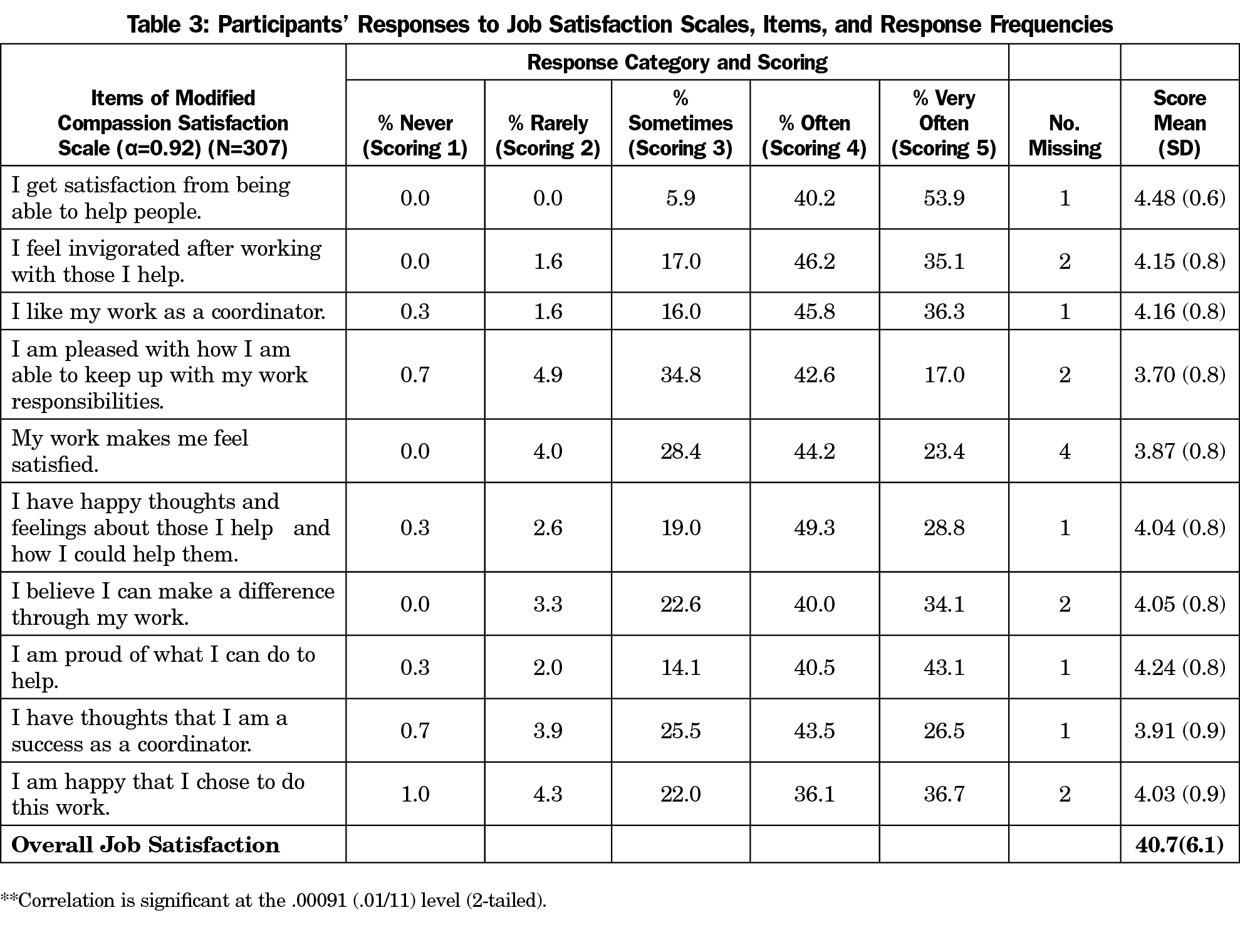 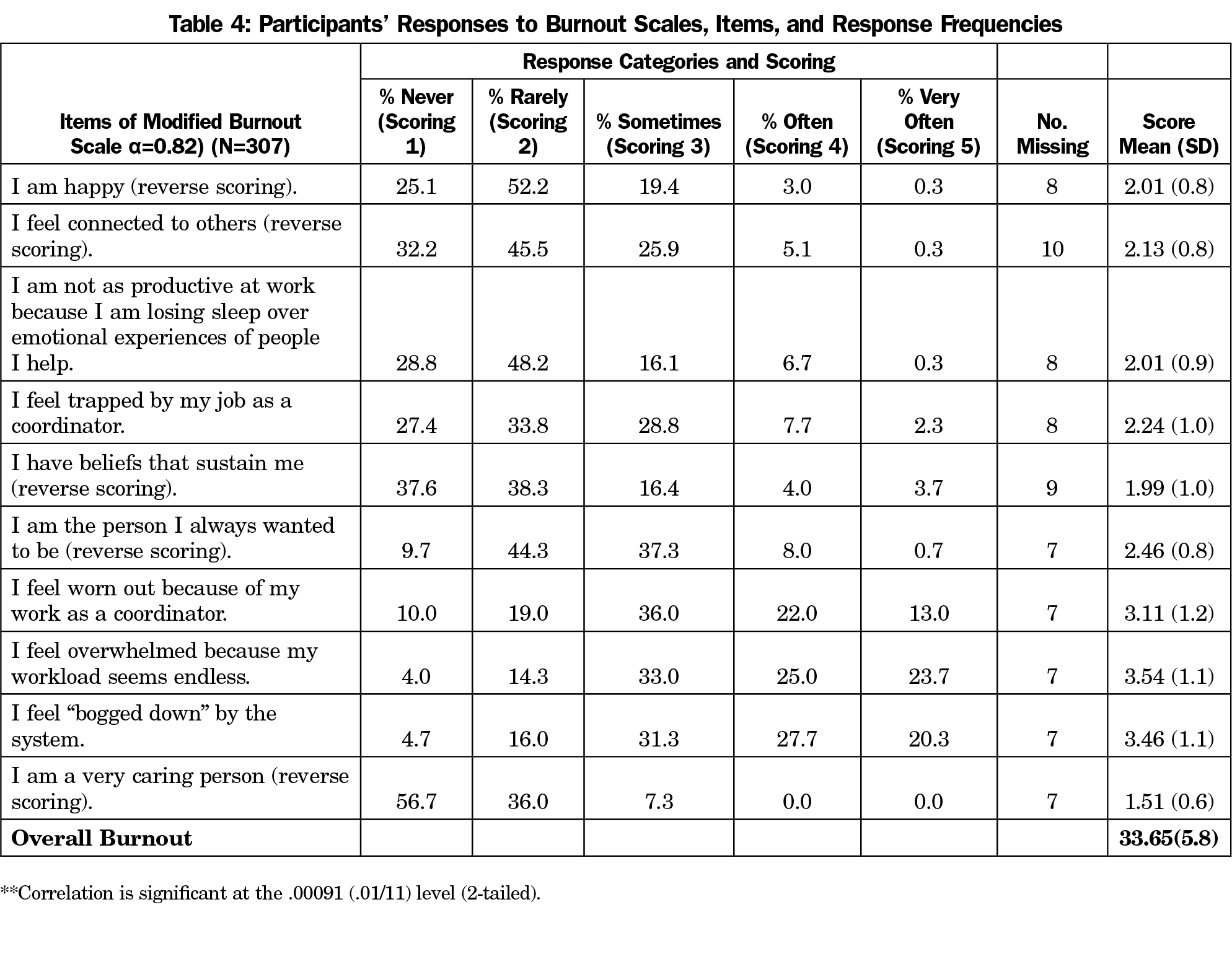 Most of the FMR coordinators’ work is done behind-the-scenes; they provide significant logistical, social, and emotional support to residents, fellows, faculty, and staff.1,2 Although their work is often underrecognized, our study suggests that most FMR coordinators are proud of the work they do as helpers contributing to graduate medical education. Consistent with previous findings,18,19,20 our data show that FMR coordinators who are satisfied with their job report low rates of burnout.

Seventy-four percent of FMR coordinators have moderate to high burnout rates and deserve attention directed toward their well-being. FMR coordinators should be included in the ACGME’s ongoing promotion of awareness of resident-physician well-being in order to increase work satisfaction and decrease burnout rates. Potential solutions include providing reinforcement for a job well done and ensuring workload is manageable. This study’s data show that although most of the coordinators enjoy their work as helpers contributing to graduate medical education, their workload overwhelms and wears them out.

This study has limitations. First, only members of the AFMA were included. The social support provided by coworkers and supervisors, and its effect on job satisfaction and burnout may vary by location. Another limitation may be the time of year the survey was conducted. The study was conducted between April 2017 and July 2017, at a time of heavy workload, which included residency graduation and preparing for first-year residents to start. Additionally, the survey only provides a single snapshot of the FMR coordinators’ subjective responses.

Affiliations: Department of Family and Community Medicine, University of Kansas School of Medicine-Wichita