Background and Objectives: The United States is projected to have a shortage of up to 46,000 primary care physicians by 2025. In many cases, medical students appear to select other specialties for financial reasons, including educational debt. Physicians who were part of two BS/MD programs and received full tuition and fee scholarships for college and medical school were surveyed to examine factors that may have impacted their specialty choice. This population of US students was selected because they do not have educational debt, so their choices could be examined independent of this influence.

Methods: One hundred forty physicians who graduated from the programs as of June 2013 were invited to complete a 32-question online survey. Descriptive statistics described the population. χ2 tests and nonparametric Wilcoxon rank-sum (Mann-Whitney) tests compared primary care and nonprimary care physicians as well as those initially interested in primary care who changed before medical school graduation versus those who went into primary care. Factor analysis and Student t-test examined trends among Likert scale questions.

Results: For the physicians for whom contact information was available, 74 (53%) responded. Out of 74 respondents, 18 (24%) went into primary care. Perceptions of family medicine, comments from faculty, and lifestyle played a role in deterring students from primary care.

Researchers have estimated a deficit of 20,400 to 46,000 primary care physicians (PCPs) by 2025.1-3 Many quantitative studies have examined factors that influence medical student specialization in areas outside primary care in an attempt to understand the impending PCP shortage.4-11

Some studies have looked specifically at the effect of economic factors and educational debt on specialty choice and found some impact.12-21 With the differences in salaries between specialists and PCPs22 and rising student educational debt, various groups have tried different programs to increase the PCP workforce, such as increasing National Health Service Corps funding23 and decreasing medical school to 3 years for family medicine entrants. However, limited research has investigated the impact of tuition reimbursement without a service requirement on primary care career choice.

In Texas, high school seniors are selected for combined BS/MD programs. Originally, as long as they met specific requirements, they matriculated to medical school and received scholarships to cover only tuition and fees in college and medical school. Our objective was to examine factors that may have influenced their specialty choices through an exploratory retrospective cross-sectional survey. This population was selected because they do not have educational debt, so their choices could be examined independent of this influence.

Of 150 physicians who graduated from two BS/MD programs in Texas from 2003 through 2013, contact information was available for 140. These 140 graduates were invited to participate. During December 2013 to February 2014, eligible physicians were asked to complete an anonymous, confidential online survey. The survey was developed based on an instrument shared by Ian Scott and then modified after piloted feedback.9 Results were deidentified. The Institutional Review Board of Baylor College of Medicine approved this study.

Data were analyzed using descriptive statistics. Demographic data were collapsed before conducting χ2 tests to contrast results between two samples: PCPs and nonprimary care physicians (NPCPs). A second comparison group was created from a survey question that identified physicians who self reported initial interest in primary care upon medical school matriculation (IPC), but did not become PCPs, versus those who were initially interested and ultimately committed to primary care (CPC). After testing variables for normality and unequal variances, the nonparametric Wilcoxon rank-sum (Mann-Whitney) test was used to compare samples within the two groups. Debt data larger than zero was transformed into intervals based on quintiles.

A factor analysis of the Likert-scale questions was performed in order to identify any trends among responses. Factors were retained if after varimax rotation their loadings were greater than 0.3 and included three or more questions. To see how these trends differed between the groups of interest, scores were averaged for each theme and Student t-test was used to contrast means within the two comparison groups.

All analyses were conducted in Stata 13.1 (StataCorp LP) with a significance threshold of α=0.05.

Out of 140 physicians, 74 (53%) responded. The majority of the sample were nonwhite and from self-reported middle-class families (Table 1). There were no statistically significant differences in demographics between PCPs and NPCPs or IPCs and CPCs. Eighteen respondents (24%) went into primary care and 17 different specialties were reported from the sample (Table 2). Several factors indicated differences in both sets of subgroups: serving underserved populations, concern about call schedules and documentation, continuity of care, adequate income to eliminate debt, and interest in health promotion and urgent care (Table 3). Factor analysis produced two themes indicating a society-oriented pattern and a prestige and hospital orientation pattern (Table 4). 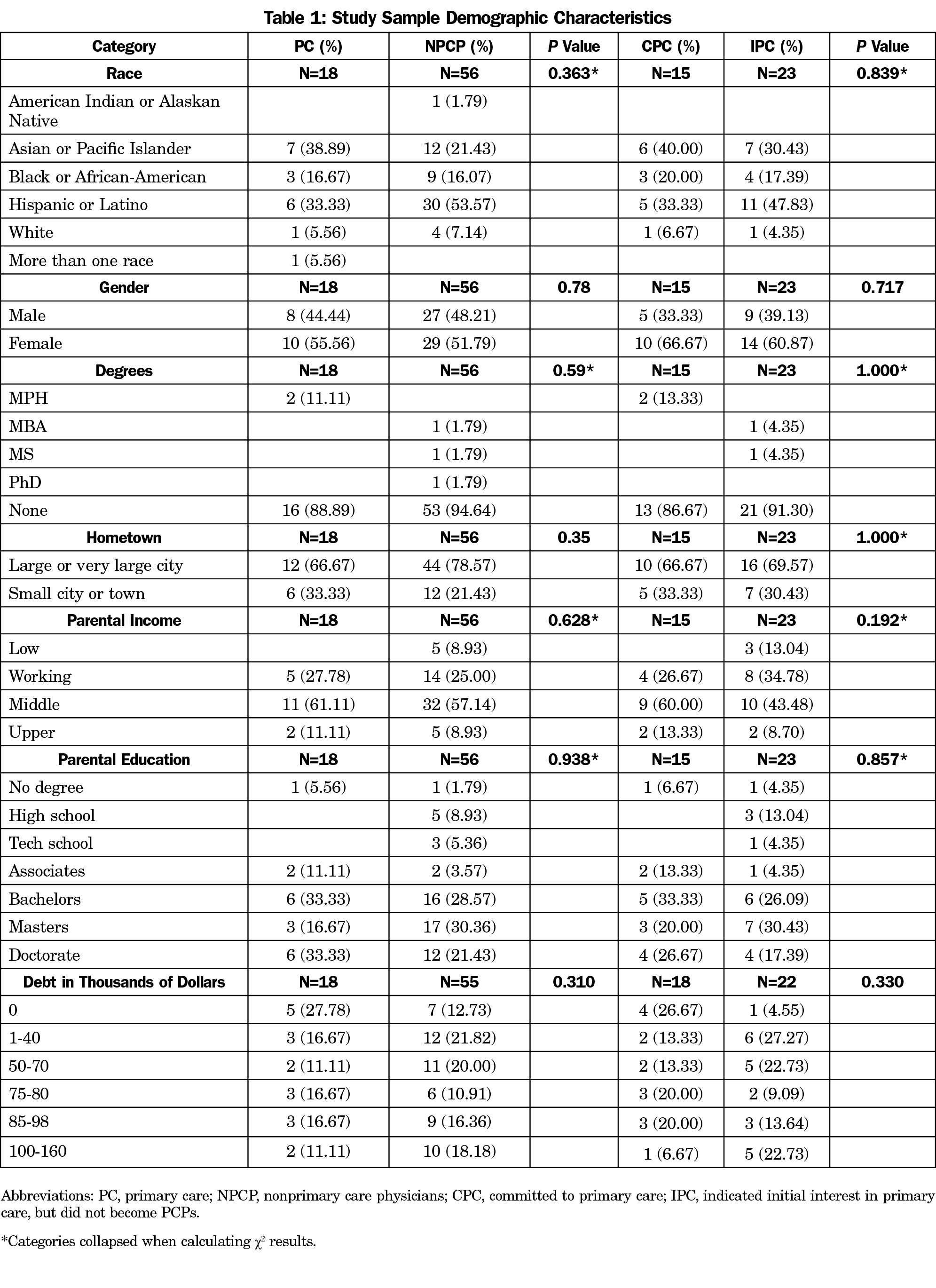 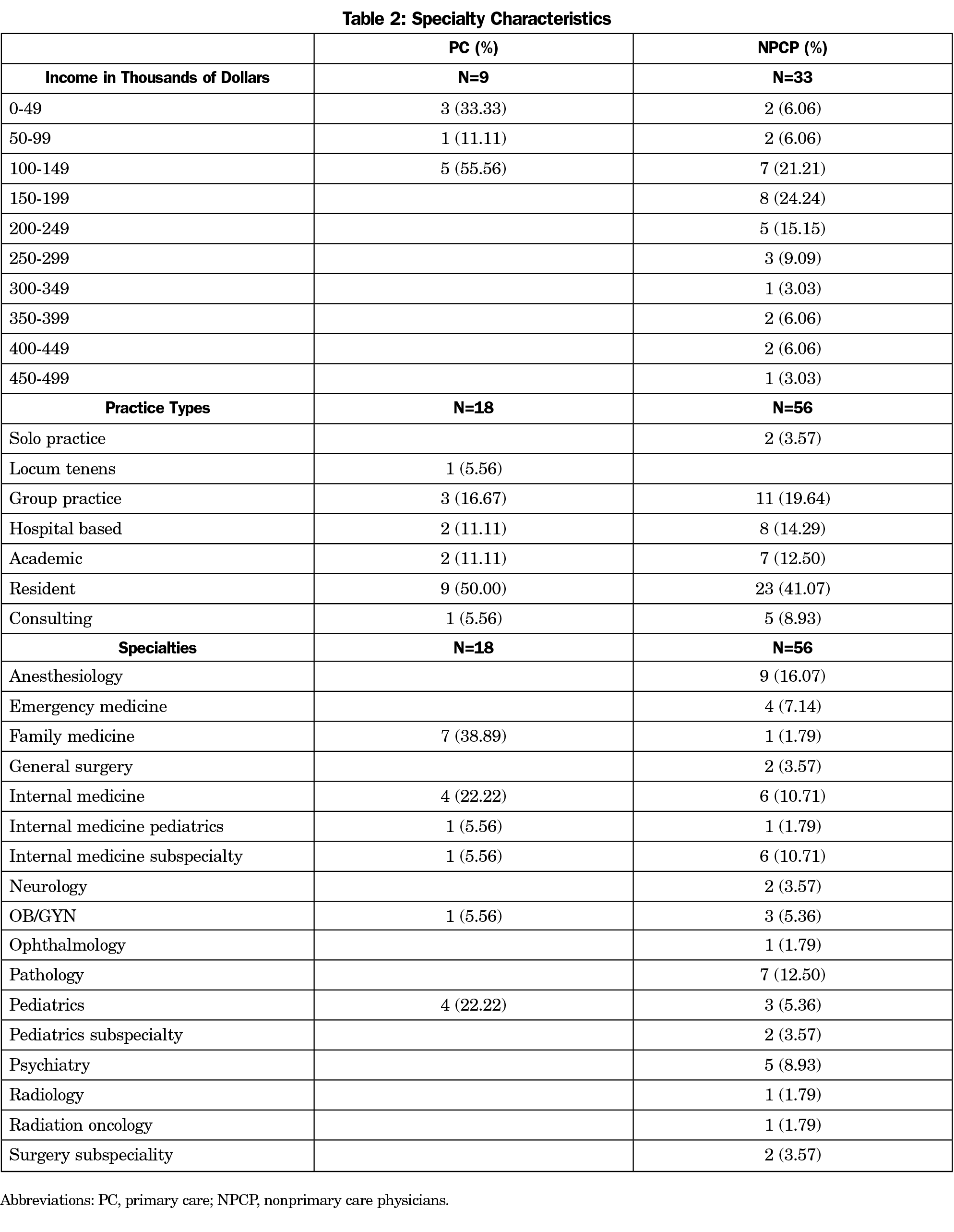 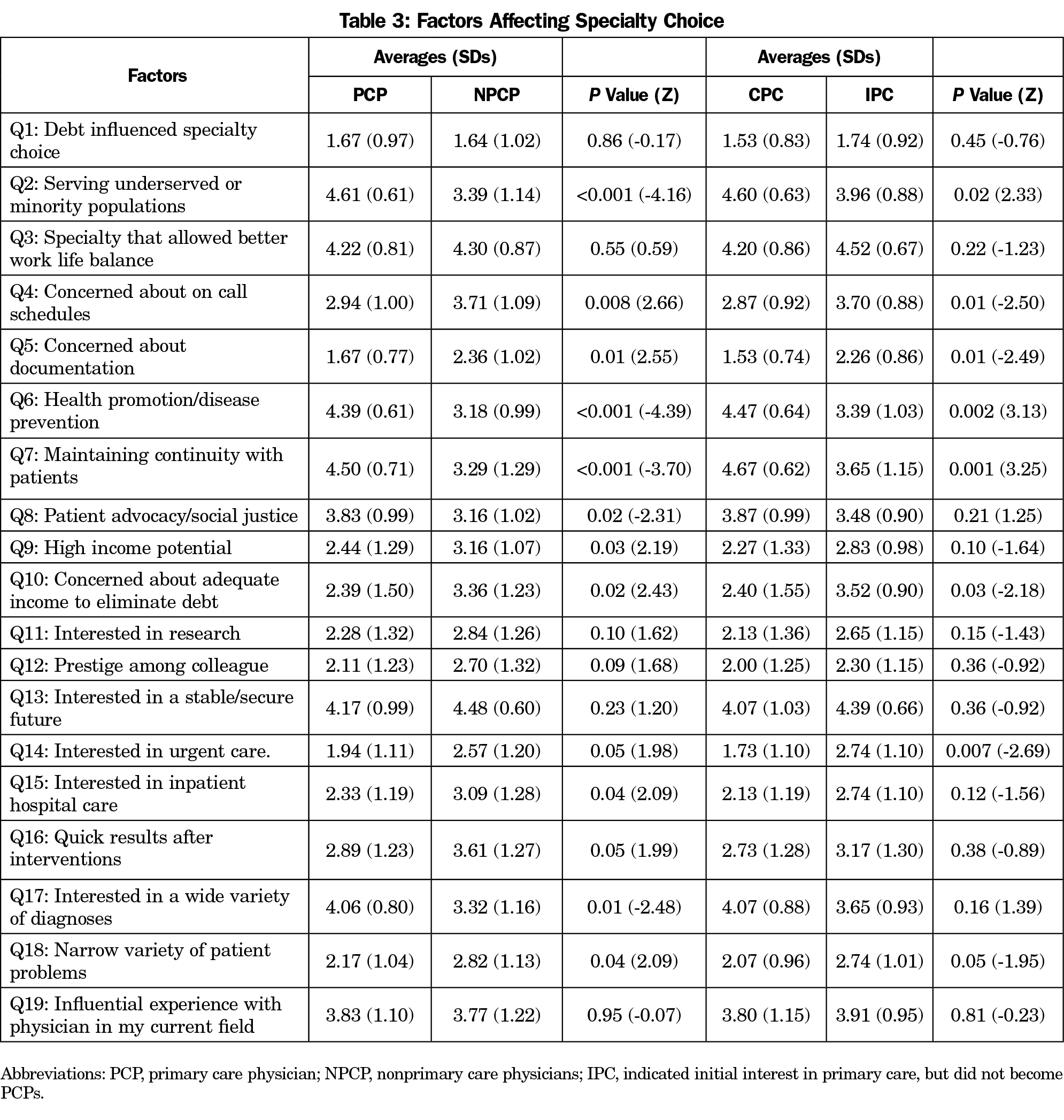 To the best of our knowledge, this is the first study about specialty choice in a population that received tuition assistance without a service requirement.

Two themes emerged among highly correlated statements. The first is an assocation that people interested in primary care were also interested in serving underserved or minority populations, health promotion, patient continuity, and patient advocacy. These results are similar to those from previous studies that found students with a societal orientation were predictive of entering primary care.4,9,24

The second theme was found in statements supporting high income potential, prestige among colleagues, inpatient hospital care, and quick results from interventions. These are consistent with earlier analyses of student choice.4,7,9

Additionally, the respondents most interested in high incomes did not enter primary care. Some specialists earn $3 million more over their lifetime compared to primary care physicians.22 These findings have implications for improving recruitment for primary care and a diverse physician workforce. Income disparities reduce the odds of medical students choosing family medicine, working in a federally qualified health center, or practicing in a rural area.22

An interesting subpopulation is people who were initially interested in primary care, but chose another specialty. Previous research has illustrated that perceived physician dissatisfaction and workload has deterred students from internal medicine.6 In our study, IPCs were concerned about call schedules, documentation, and adequate income to eliminate debt. This suggests that perceptions of the specialty, faculty, and lifestyle played a role in deterring students from primary care.

This study was limited by a low response rate and small sample size, so results may not be generalizable to other populations. Also, standard survey biases such as nonresponse bias and social desirability bias may have influenced respondents.25 Individuals’ abilities to accurately and retrospectively identify the factors that influenced a particular decision may be limited.26 Furthermore, studying graduates from a BS/MD program may limit the application of results to a broader population. While they committed to a medical career prior to matriculation to college, these doctors who had the security of conditional acceptance to medical school and tuition assistance can provide some insight into ways to increase the number of primary care physicians. Some still had high levels of debt, most likely due to living costs from undergraduate and graduate education.

In conclusion, full tuition and fee scholarships do not seem to be associated with influencing BS/MD students to choose primary care. Future directions for exploration include studying the undergraduate medical education admissions policies, hidden curriculum, and faculty could provide further insight into specialty choice influences. Furthermore, examining perceptions of a satisfactory work environment and better understanding the role of lifestyle could help keep students who are initially interested in primary care from switching and help with concerns of physician burnout.

The authors acknowledge Susan Nash, PhD, for assisting with the study design and Julie Phillips, MD, for providing feedback on the manuscript.

Preliminary findings were presented at the STFM Annual Conference in May 2014 in San Antonio, TX and NAPCRG Annual Meeting in November 2014 in New York, NY.