Background and Objectives: Academic family medicine departments have traditionally promoted faculty using research and scholarship criteria augmented by teaching, clinical care, and service. Clinic-focused faculty who spend significant time in direct patient care may not have enough time to meet promotion criteria, although they are critical for training future family physicians and for rebalancing the system of academic promotion.

Methods: We surveyed family medicine department chairs on the effects of protected time for scholarship, presence of promotion and tenure (P and T) committees, salary increase, and special promotion tracks on promotion of physician faculty.

Conclusions: Promotion rates are higher for faculty with protected time for scholarship than for clinic-focused faculty for promotion to both associate and full professor. Clinic demands on faculty may reduce the likelihood of engaging in scholarship or research that in many academic family medicine departments is necessary for promotion.

Academic medicine is at a critical juncture with respect to primary care. In 2017, 42% of active physicians in the United States were aged 55 years or older. Between 2017 and 2032, the US population is projected to grow by 10%, while the population aged 65 and older is projected to grow by 48%. The Association of American Medical Colleges (AAMC) projects that by 2032, the United States will have a shortfall of between 21,100 and 55,200 primary care physicians. To produce medical graduates to address the shortfall, academic medical centers need a large clinician educator (CE) workforce. At the same time, family medicine departments have fiscal constraints that emphasize faculty effort in clinical care over research and scholarship, making it difficult for CEs to get promoted. The competing priorities of medical education, clinical care, and scholarship are front and center in the academic promotion process for CEs.

Academic family medicine departments have traditionally promoted faculty using criteria of research and scholarship augmented by teaching, clinical care, and service to the institution. This began to change in 1990 when Boyer argued that scholarship should include not only the scholarship of discovery (research) but also the scholarship of integration, application, and teaching.1,2 In 1999, academic medical leaders described CEs as “mission critical,” and called for rebalancing the system of academic promotion which required publications and regional reputation.3 In 2005, Fleming et al advocated for a “separate and equitable” promotion track for CEs, with an emphasis on education-specific scholarly productivity.4 To further clarify promotion criteria for CEs, in 2006 AAMC endorsed five domains of educational scholarship: teaching, learner assessment, curriculum development, advising and mentoring, and educational leadership and administration.5

Despite the endorsement of educational scholarship, the emphasis on research in academia may leave clinic-focused faculty feeling less valuable than faculty who engage in research.6 A 2011 AAMC analysis of faculty retention found a 70% 5-year retention rate for clinical family medicine faculty.7 In a study of faculty members who left one school of medicine, 66% of departed faculty cited professional and advancement opportunities as a reason.8 At another academic medical center (AMC), global satisfaction was correlated with higher rank.9 The replacement cost of generalist clinical academic physicians has been conservatively estimated at over $115,000.10 An effective system of promotion may encourage faculty retention.

Data were gathered as part of a larger omnibus CERA survey of family medicine department chairs.12 Pretesting was done on family medicine educators who were not part of the target population. Questions were modified following pretesting for flow, timing, and readability. Data were collected from August to October 2019.

The survey was sent to 200 department chairs; one email could not be delivered, and six emails had opted out of SurveyMonkey surveys resulting in a final sample of 193. The American Academy of Family Physicians Institutional Review Board approved the project in August 2019.

Respondents answered demographic questions about themselves, their physician faculty, and promotions within their departments. They answered questions about whether their department had a P and T committee, whether promotion came with a salary increase, and if they had a special track or promotion criteria for physician faculty whose job is patient care (which may include teaching in the clinical setting) that does not require scholarship, leadership, or service. Chairs also indicated the total number of physician faculty in the department; faculty with at least 25% protected time for scholarship, research, and/or teaching (regardless of funding source); percent of faculty with at least 80% clinical time who we refer to as “clinic-focused faculty”; and the number of faculty promoted to associate and full professor in the last 12-months in each of these categories. All questions about faculty referred to physician faculty only.

Of the 193 department chairs who received the survey, 105 completed it for a response rate of 54.4%. Chairs (61.6% male; 16.2% age 40 to 49 years, 36.4% age 50 to 59, 44.4% age 60 to 69) reported that out of 2,093 full-time physician faculty, an average of 47.3% (SD=38.4) of their faculty have at least 25% protected time for scholarship and 28.6% (SD=33.1) have 80% or more clinical time. In 72.2% of departments, promotions come with a salary increase, 67.4% of departments have P and T committees, and 51.6% have a special track for physician faculty whose primary role is patient care. Wilcoxon signed rank tests showed promotion rates to both associate and full professor were higher for faculty with 25% time for scholarship than for clinic-focused faculty (Table 1). For clinic-focused faculty, promotion rates were higher to associate professor than they were to full professor. No differences in rates were found for promotion to associate professor and full professor for faculty with 25% time for scholarship (Table 2). Mann Whitney U tests showed no differences in promotion rates for either rank between departments that had P and T committees and those that didn’t, whether or not promotion came with a salary increase, or if departments had a special track for physician faculty whose job is patient care (Table 3). 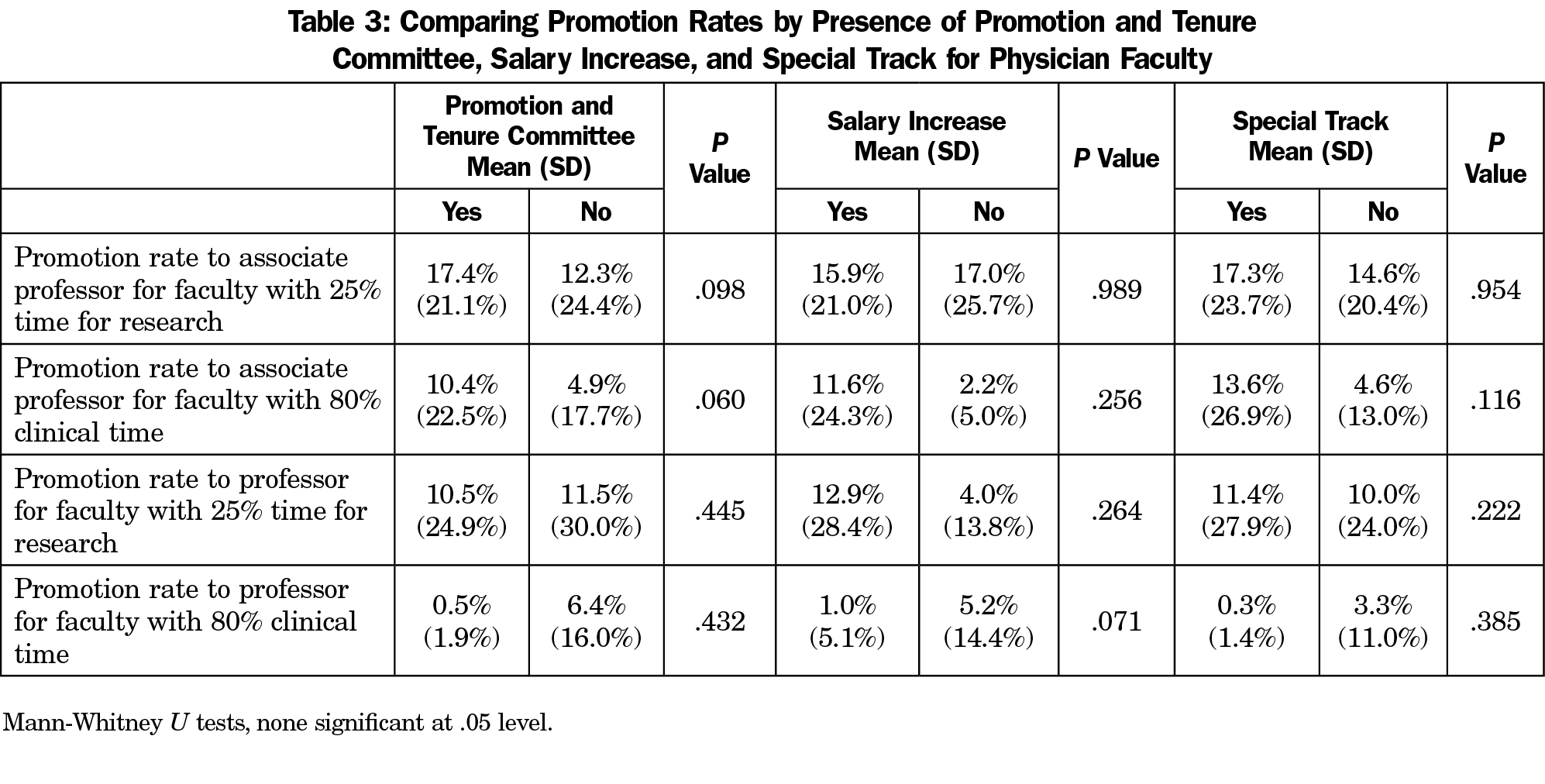 Promotion rates are higher for faculty with protected time for scholarship (≥25% protected time for research/scholarship/teaching) than for clinic-focused faculty (faculty with ≥80% clinical time). We found this for promotion both to associate and full professor. There are several possible reasons for the lack of advancement of clinic-focused faculty. Clinical and academic demands on faculty can reduce the likelihood of engaging in research,13 which in many AMCs is necessary for promotion. One study found that physician faculty with more than 50% of time in clinical care had slower career progress, were less likely to be at rank of professor, and had lower commitment to academic careers than peers with less than 50% clinical time.14

Clinic-focused faculty are promoted at much lower rates to full professor than they are to associate professor, whereas faculty with protected time for scholarship are promoted at similar rates to associate and full professor. Advancement to professor generally requires a higher level of scholarship than advancement to associate professor, and clinic-focused faculty may not have enough time to engage in activities that would help them meet that higher bar. The emphasis on research over teaching in medical education has led to lower professional satisfaction, promotion, retention, and pay for clinical faculty.15 Faculty who spend the great majority of time in patient care may not see value in attaining the rank of professor. There may also be insufficient incentives for predominantly clinical faculty to stay in academic departments for the number of years required to attain rank of professor.

It appears that financial incentives may not increase promotion rates. Although the majority of departments couple promotion with a salary increase, this was not associated with a higher promotion rate. Departments with P and T committees did not have more promotions than those without. P and T committees with an evaluative role may simply be a step in the promotion process, rather than providing the mentoring and tracking necessary for promotion. In one study, internal medicine department chairs and P and T committees both valued teaching skills and clinical skills for promotion of clinical faculty, but department chairs valued educational activities, research related to education, and clinical productivity more highly than P and T committees did.16 Such lack of agreement about performance measures can be a barrier to promotion. A 2011 literature review concluded that “succinct, discrete definitions of clinical scholarship have been published in other disciplines, but not in academic medicine.”17 There may be a way to maximize promotions by involving departmental P and T committees in defining and clarifying evaluation of educational scholarship and providing sufficient milestone evaluation and mentorship for faculty promotions.

Half of departments in this survey had a special clinical track for physician faculty whose job is primarily patient care (which may include teaching in the clinical setting) that does not require scholarship, leadership, or service, but that was not associated with promotion rates. There is great variation in faculty tracks nationwide. One analysis distinguished clinician educator (<50% patient care), clinical (90%-100% patient care) and educator (>50% education). Of the first two tracks, 25% were tenured in 2009.18 The lack of a higher promotion rate to professor in departments with a clinical track may be a result of clinical tracks being a relatively recent phenomenon in some AMCs, or a lack of expectation for clinical faculty to achieve the rank of professor.

This study was limited by the scope of the survey questions. We queried department chairs about physician promotions in the last year, rather than a longer period of time, to reduce inaccurate recall of more distant events, although we realize that promotions from only 1 year may not be sufficiently representative. We may have had a more accurate picture of promotion rates if we had asked about the previous 2 or 3 years. We categorized faculty into at least 25% protected time and at least 80% clinical time. Faculty time is much more nuanced, but in our experience those distinctions are clear in effort calculations. We did not ask about tenure or the implications of not achieving promotion (ie, institutions with up-or-out tracks), but it is possible that availability of tenure might influence promotion trajectories.

Future study should query the reason for the drop-off in promotions to professor for clinic-focused faculty.

In academic family medicine, clinic-focused faculty are promoted at lower rates than faculty with protected time for scholarship. Salary increases, department P and T committees, and separate clinical tracks were not associated with promotion rates. We must learn more about the incentives for clinic-focused faculty to remain in academic medicine because they are key educators and mentors for the next generation of primary care physicians.4