What Barriers Exist in the Minds of Vaccine-Hesitant Parents, and How Can We Address Them?

Background and Objectives: Despite substantial health benefits and prolific research efforts to demonstrate safety and increase uptake, vaccine hesitancy has increased dramatically. This study aimed to systematically analyze available literature on vaccine hesitancy in the United States and determine the rationale behind vaccine-hesitant parents and potential interventions.

Methods: We conducted a literature search and identified 232 articles; we included 90 after screening. We pulled information from each article using standardized questions for “type of study,” “population,” “specific vaccine,” “reasons for hesitancy,” “hesitancy prevalence,” “attempt at change,” “results of intervention,” and “future interventions.” We created recurrent themes from the data and analyzed these themes via descriptive statistics.

Results: Vaccine safety was the most commonly identified reason for vaccine hesitancy amongst studies (50%), followed by not enough information (30%), side effects (26%), low risk of disease (26%), social norms (22%), vaccine schedule (21%), not recommended by doctor (21%), efficacy (18%), cost/access (13%), sexual concerns (12%) and distrust of establishment (7%). Only 20% of papers documented an intervention, and <50% of these reported increased vaccination rates or intent. More research was the most commonly identified next step (49%).

Conclusions: Despite large amounts of research on vaccination rates, patients are still reporting not enough information and safety as the most common reasons for vaccine hesitancy. Interventions were few and without promising results. More research was the most suggested intervention. Such research must address concerns of the vaccine-hesitant community, comparing risks and benefits of each vaccination in a longitudinal, coherent, and transparently unbiased fashion.

Vaccines have inarguably produced substantial public health benefits. Recently, however, parents’ confidence in vaccination against preventable diseases has been wavering. The prevalence of concerns over vaccination (vaccine hesitancy) increased from 19% in 2000 to 50% in 2009.4 Vaccine hesitancy directly contributes to delayed and incomplete vaccination in children, and undoubtedly played a part in the highest US incidence of measles in 20 years.4 The problem also exists in Europe, where they experienced a fourfold increase in measles from 2017 to 2018, with more than 20,000 cases.5

Instead of vilifying and shaming parents who hesitate to vaccinate their children, we should try to understand what the common barriers are, and how we can effectively address them. Much research has been undertaken to determine the reasons behind vaccine hesitancy, but these studies have produced a wide range of results that can be difficult to process. With this review, we aimed to assess the available literature and condense the information into major unifying themes. A properly synthesized data set could provide a clear avenue for understanding the major rationales of vaccine-hesitant parents and suggest interventions that may increase vaccine confidence in parents.

Our team identified original research that addressed parental vaccine beliefs. Specifically we sought articles that described the reasons for vaccine hesitancy, and any interventions that targeted these reasons. We searched PubMed using the MeSH terms “United States,” “parents,” “vaccines,” and “attitudes to health,” and identified 232 articles. After screening, we included a total of 90 articles in the final analysis (Figure 1). Three authors used a uniform template of data points and questions to keep the data extraction systematic and to mitigate bias (Table 1). If there was any uncertainty about a specific data point, the decision was made by consensus.

Our analysis of the reasons for vaccine hesitancy consisted of the identification of recurrent themes in the data. Themes were derived from the papers themselves, not from predetermined categories. Each author independently developed a list of themes, then the team determined the final categorization, with as little overlap as possible and without excluding any identified themes. To ensure accuracy and internal validity, each of the final categories was independently analyzed twice by two separate individuals. Disputes between the two analyses were settled by a third reviewer. If other themes became apparent, the themes were recreated, and the data set was reanalyzed. We analyzed data using descriptive statistics. 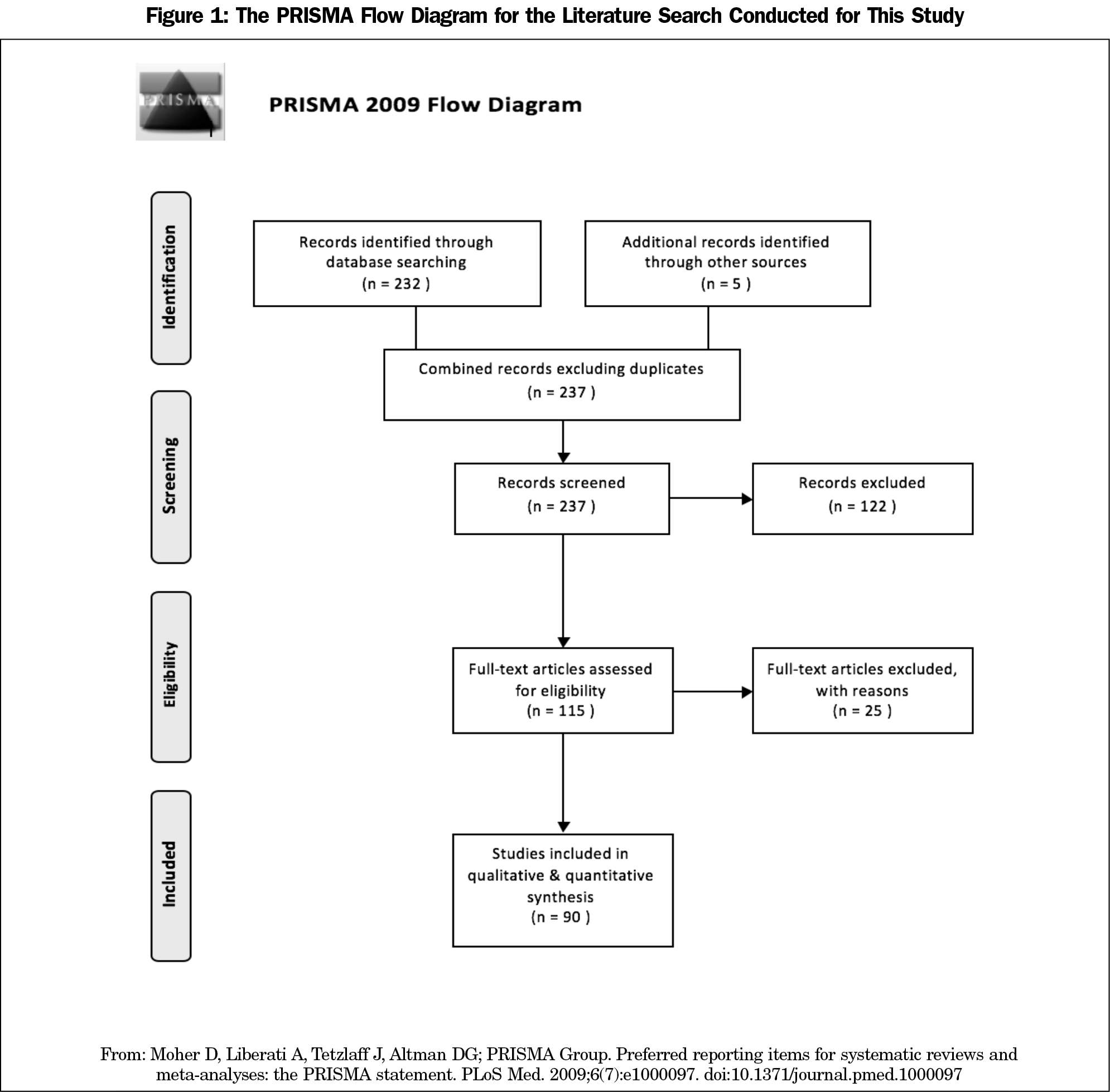 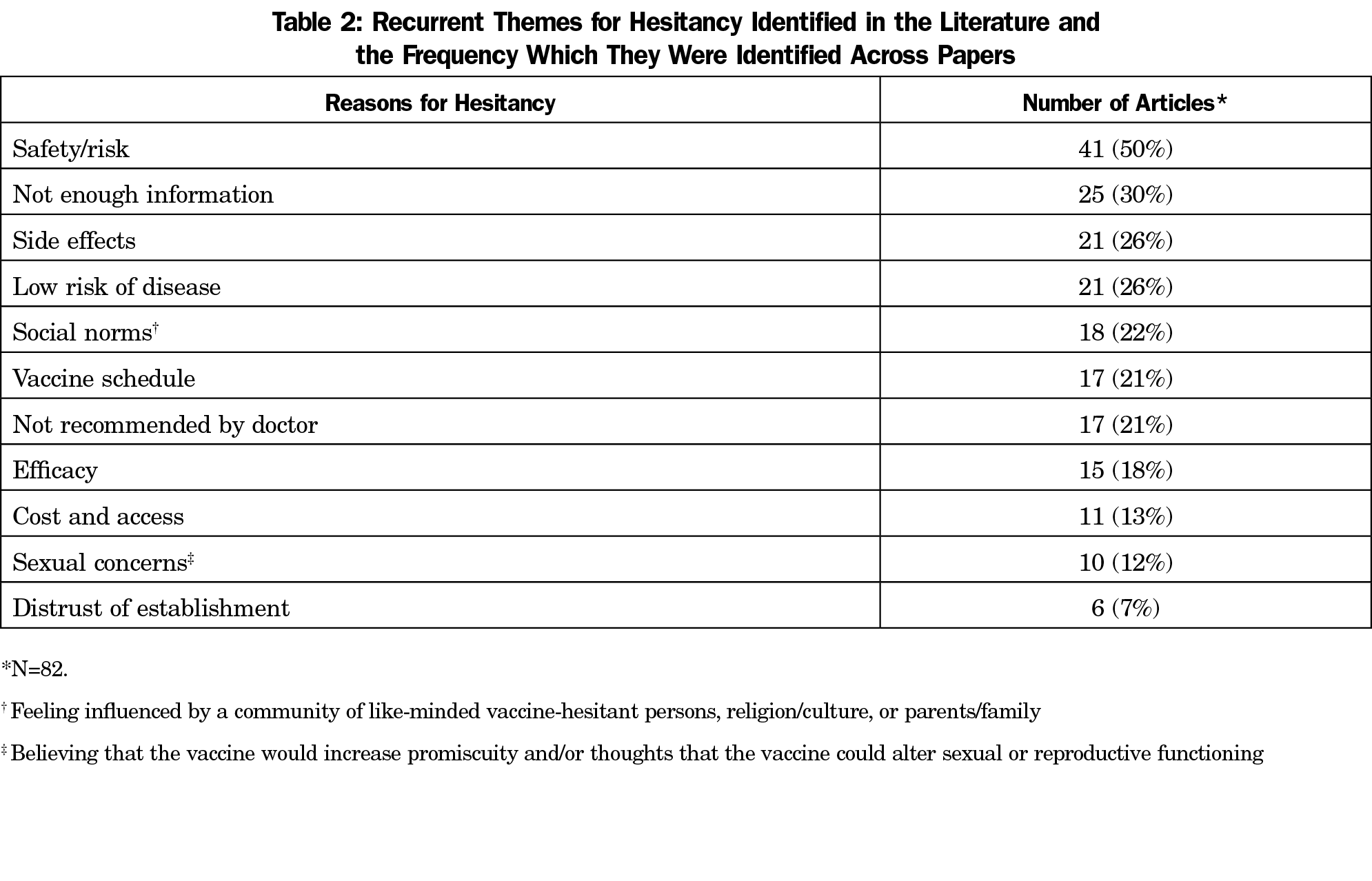 Eighty-two of the 90 included papers reported on reasons for vaccine hesitancy (Table 2). The other eight studies did not identify reasons for hesitancy; most were intervention studies. Vaccine safety was cited by half of the papers (41) as a concern. Not having enough information was the second most common reason, reported in 25 articles.

Only 18 papers (20%) documented an actual attempt at change. Of these, 10 (56%) were educational interventions on risks/benefits, four focused on changing the schedule of vaccinations, three implemented school-based programs, two addressed social norms with culturally tailored messages, and two were interventions at the physician level. Group counseling sessions (to discuss vaccine hesitancy with doctors and peers) and combination vaccines were addressed by one study each.

The most cited recommendation to reduce vaccine hesitancy was to obtain more research (49%), though 34% of papers concluded that better physician recommendations would decrease vaccine hesitancy, and 28% stated that leveraging social norms would be beneficial. Stressing the benefits of vaccination was more often cited (13%) than stressing the risks of nonvaccination (8%, Table 3).

As anticipated, our analysis yielded a wide variety of studies with various designs, results, and conclusions. Despite this, several themes recurred. From these recurrent themes, commonalities across the individual data sets emerged.

Concern about safety was the most frequently cited reason for vaccine hesitancy. Papers often reported on safety in general, identifying some specific safety concerns, but rarely reporting supporting data or prevalence. Focus group data from a 2017 study revealed a breadth of safety concerns that vaccine-hesitant parents shared. These concerns included several themes: (1) possible long-term effects of vaccines (asthma, allergy, obesity, childhood cancer, SIDS, autism), (2) the number and timing of vaccines (too many vaccines in the first 15 months and too many vaccines given simultaneously), (3) other ingredients in the vaccines (toxins, heavy metals such as mercury and aluminum), and (4) the underreporting of side effects by vaccine manufacturers.6

Despite a large body of literature, not enough information was the second most commonly cited reason. This could be because many studies that cited safety as a concern focused on one specific vaccine instead of vaccines in general. Mistrust in the existing literature could also contribute to safety concerns, as distrust of establishment was another reason for hesitancy.

Not recommended by doctor was another surprisingly common theme. The reasons behind this are unclear, given the strong support of vaccination by the medical community. One possibility is that doctors are not adequately engaging patients after an initial answer of “no,” and are neglecting patients who might consider vaccination with continued counseling. This is supported by our findings that studies grossly excluded delayed and partial vaccination as an option. All evidence clearly supports the Advisory Committee on Immunization Practices vaccination schedule, and physicians should strongly recommend this as the only evidence-based vaccine schedule.7 However, we should continue dialogue with parents refusing vaccination, as delayed or partial schedules are better than no vaccination and establishes a rapport that may allow for increased vaccination in the future. Doctors may also feel they don’t have enough information. While the American Academy of Pediatrics and Centers for Disease Control and Prevention do give guidance on general approaches to these conversations, keeping up with hard data and multiple studies on various vaccinations can be tedious and is not realistic for many doctors.8,9

The theme of not enough information is highlighted by more research being cited as the most commonly proposed future intervention. This matches up with vaccine-hesitant parents’ desire to know more about vaccines. The second most common next step, proposed by more than one-third of papers, was to improve physician recommendations. Further research must be done to determine why physicians are not recommending vaccinations or are not presenting the information effectively.

The paucity of intervention studies suggests that there is no clear consensus on an approach to addressing vaccine hesitancy. Despite this, most intervention studies attempted to educate patients. Only two interventions attempted to address physicians’ recommendations, which is disproportionate to the number of studies citing this problem. One likely explanation for this is that researchers don’t have a solid understanding of why physician recommendations are lacking. As previously discussed, one possibility may be that physicians lack the appropriate information to engage in a meaningful conversation about vaccine hesitancy and therefore veer away from intelligent debate. Another possibility is that doctors would rather not believe that they are contributing to the vaccine hesitancy movement.

Since the current interventions do not effectively address parents’ concerns about vaccine safety or their perceived lack of information, in the future we must focus on building an evidence base that is accessible and credible to them. To this end, we suggest a large long-term cohort study of patients who are unvaccinated, partially vaccinated, delayed vaccinated, and fully vaccinated. The advisory board should include members of the vaccine-hesitant community, as our research suggests that social norms are important to the vaccine hesitancy movement. The study would also benefit from the absence of pharmaceutical funding, as distrust of the establishment has been noted in several papers. Finally, and perhaps most importantly, the proposed study should attempt to answer the questions that the vaccine-hesitant community is asking. The current research satisfies the medical community but does not effectively address the concerns of vaccine-hesitant parents. A single collaborative research effort that leverages the power of electronic health records could finally meet the needs of both the medical and vaccine-hesitant communities.

By unifying these data, we now have a better representation of the reasons for vaccine hesitancy in the United States. Our analysis supports the widespread beliefs that vaccine hesitancy is driven by a multitude of factors, with the most concerns over the safety of the vaccines and not being satisfactorily informed about the health risks and benefits related to vaccination. It’s likely that feelings of not having enough information reflect a distrust of the currently available data and drive the concerns over health outcomes. Although our research indicates that current physician recommendations to vaccinate are inadequate, we also learned that patient self-education with the available data has mixed results and is not consistently effective. While we wait for more and better studies on how to overcome parents’ vaccine hesitancy, the best approaches seem to be to recommend the appropriate vaccines at every visit, regardless of previous uptake; offer vaccination scheduling options; and stress the benefits of vaccination rather than the risks of nonvaccination.

2023 © Society of Teachers of Family Medicine. All Rights Reserved.