Background and Objectives: Coaching, mentoring, and sponsoring are tools academic leaders can utilize to develop junior faculty. Each tool has a unique goal, time frame and method. It has been suggested that sponsoring may be a particularly useful tool for furthering the careers of women in medicine. Our primary aim was to understand to what extent one group of academic leaders—family medicine department chairs—have benefited from each tool in their own career development and how often they use each to develop others. A secondary aim was to compare women’s experiences with sponsorship to their male colleagues.

Methods: We surveyed all US family medicine department chairs electronically about their experiences with coaching, mentoring, and sponsoring. We collected data from August 2019 to October 2019.

Results: One hundred five of 193 family medicine department chairs responded to our survey (54.4% response rate). Most indicated that mentoring played a significant role in their career development, with fewer reporting coaching and sponsorship played significant roles. More reported frequent use of mentoring to develop faculty compared to coaching or sponsoring. Training in mentoring and sponsoring was associated with increased use, but coaching was not. No gender difference was found in this study population.

A critical task of leaders in academic medicine is to help junior faculty build successful academic careers.1-3 Many methods are available to leaders to help develop junior faculty including coaching,4 mentoring,5 and sponsoring6. Extensive literature has been published about mentoring.6,7 More recently, coaching and sponsoring have received attention as distinct ways that more experienced individuals can help improve, develop, and advance junior faculty.4,8

Coaching, mentoring, and sponsoring differ in their specific goal, time frame, and methodology. The existing literature does not use consensus definitions, and there is a degree of overlap in the concepts. There is enough agreement about what the concepts mean to view them as distinct entities. Table 1 compares key features of these three tools based on the existing literature.4-6,9 Using all three tools in the appropriate setting and in a complementary fashion is likely to achieve the greatest overall development of academic faculty.

Coaching is typically viewed as a periodic practice. Lovell highlights that it is often iterative in nature, following an “observe, provide feedback, reobserve” for the coach. From the standpoint of the coached, this is a “perform, receive feedback, reperform” cycle.4 The goal of coaching is to improve the performance of a relatively isolated task, skill, or activity to reach a predefined goal,10 and has shown the most promise for technical skills. It may also have a positive impact on physician well-being.4

Mentoring is classically a longitudinal process aimed at career development through dialogue-based guidance.7,11 Research supports the benefits of mentoring, including personal development, research productivity, and grant success.7 A wide range of models of mentorship have been studied with most relying on a mentor giving advice and suggestions to a mentee. The outcomes of a mentoring relationship are less specific initially, although broad goals are often identified.11

Sponsoring has only recently been viewed as a potentially important ingredient to career development in academic medicine.4,12 Sponsorship may be an isolated episode or a sequence of actions in which an individual provides sponsorship over the course of many years. The explicit goal of sponsorship is career advancement for the sponsored.6 Much of the existing literature theorizes that sponsorship may be more important for women than men.6,13 Sponsoring is seen as a possible way to address the ongoing gender gap in academic medical leadership.9,14 This notion was recently challenged when Patton et al found that sponsorship appeared to have a greater benefit for male than female National Institutes of Health grantees.15

Most of the existing literature treats these three development tools in isolation, with little work having been done comparing these methods. It would be useful to understand how academic physicians who have achieved significant career success perceive the relative impact of these methods on their careers. It would also be valuable to understand how current leaders utilize these tools when developing others. Additionally, it would be useful to understand if the lived experience of female academic medicine leaders regarding sponsoring matches the theoretical importance placed on it in the literature.

The purpose of this study was to define the experiences of family medicine chairs with these three development tools. Our aim was to assess how these developmental tools impacted their careers, how frequently chairs employ these methods to develop faculty, and factors associated with the use of these tools by chairs. A secondary aim was to assess the sponsoring experience of female chairs compared to male chairs.

A survey containing 11 demographic questions and 12 original questions about coaching, mentoring, and sponsoring was sent to family medicine department chairs as part of a larger online omnibus survey conducted by the Council of Academic Family Medicine Educational Research Alliance (CERA).16 The overall survey was produced and conducted utilizing the standard CERA survey methodology described elsewhere.17 These methods include evaluating questions for consistency with the overall subproject aim, readability, and existing evidence of reliability and validity. Pretesting was done on family medicine educators who were not part of the target population. We modified questions following pretesting for flow, timing, and readability, and also clarity and readability as a result of this piloting. The American Academy of Family Physicians Institutional Review Board approved this project in August 2019. Data were collected from August 2019 to October 2019.

The survey sampling frame was US family medicine department chairs, as identified by the Association of Departments of Family Medicine, an organization made up entirely of family medicine chairs. Email invitations to participate were delivered with the survey utilizing the online program SurveyMonkey. Four follow-up emails to encourage nonrespondents to participate were sent after the initial email invitation.

The authors developed the following definitions of coaching, mentoring, and sponsoring based on review of the literature. We provided these definitions for respondents to view while they completed the survey:

Coaching: Periodic specific feedback provided for the purpose of improving performance on an isolated professional task, action, or activity

Mentoring: A longitudinal relationship in which guidance and advice is given for the purpose of professional development

Sponsoring: Episodic public support by an influential person for the purpose of professional advancement

We conducted descriptive statistics of the results to compare relative frequencies of the chairs’ experiences with the three tools. We performed χ2 analyses to understand associations between variables; we set statistical significance at P<.05.

We identified two hundred department chairs at the time of the survey; one email could not be delivered, and six emails had opted out of SurveyMonkey surveys. The final sample size was 193. The response rate for the survey was 54.4% (105/193). The majority of respondents were men, and almost half were between the ages of 60 and 69 years (Table 2). Nearly 80% identified as White. Approximately half of respondents were based at a medical school or academic medical center with the rest being community based. Nearly half of respondents had national leadership experience, while the fewer had institutional, state-wide, or international leadership experience.

In bivariate analysis (Table 5), chairs who reported benefiting significantly from one of the three developmental tools in their own career were more likely to use that tool frequently to develop faculty compared to those who did not report having significantly benefited from the tool. This alignment was true for coaching, mentoring, and sponsoring. Chairs who reported receiving formal training in mentoring and sponsoring were more likely to use these tools frequently themselves compared to those who did not report such training. The same relationship was not found for coaching. 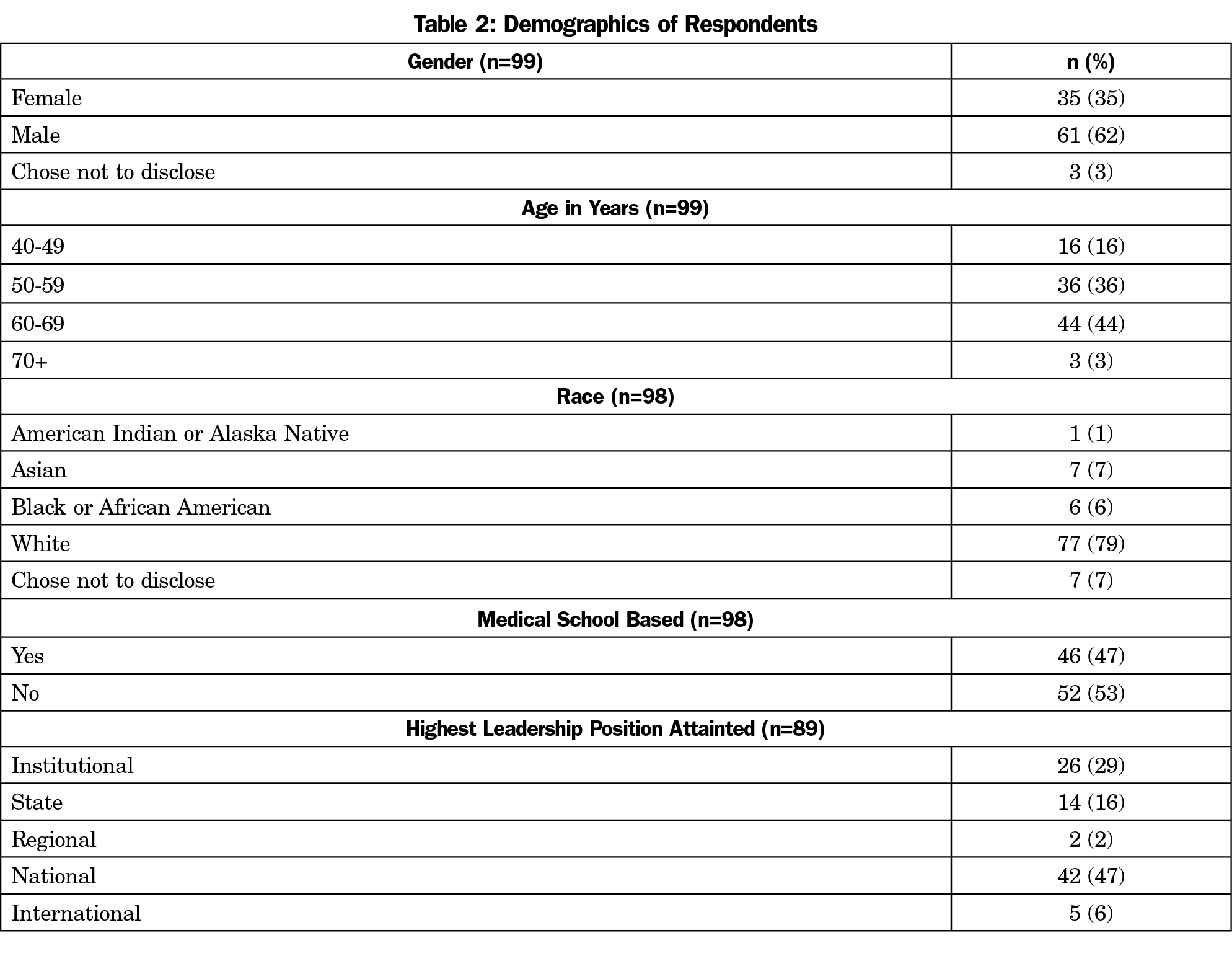 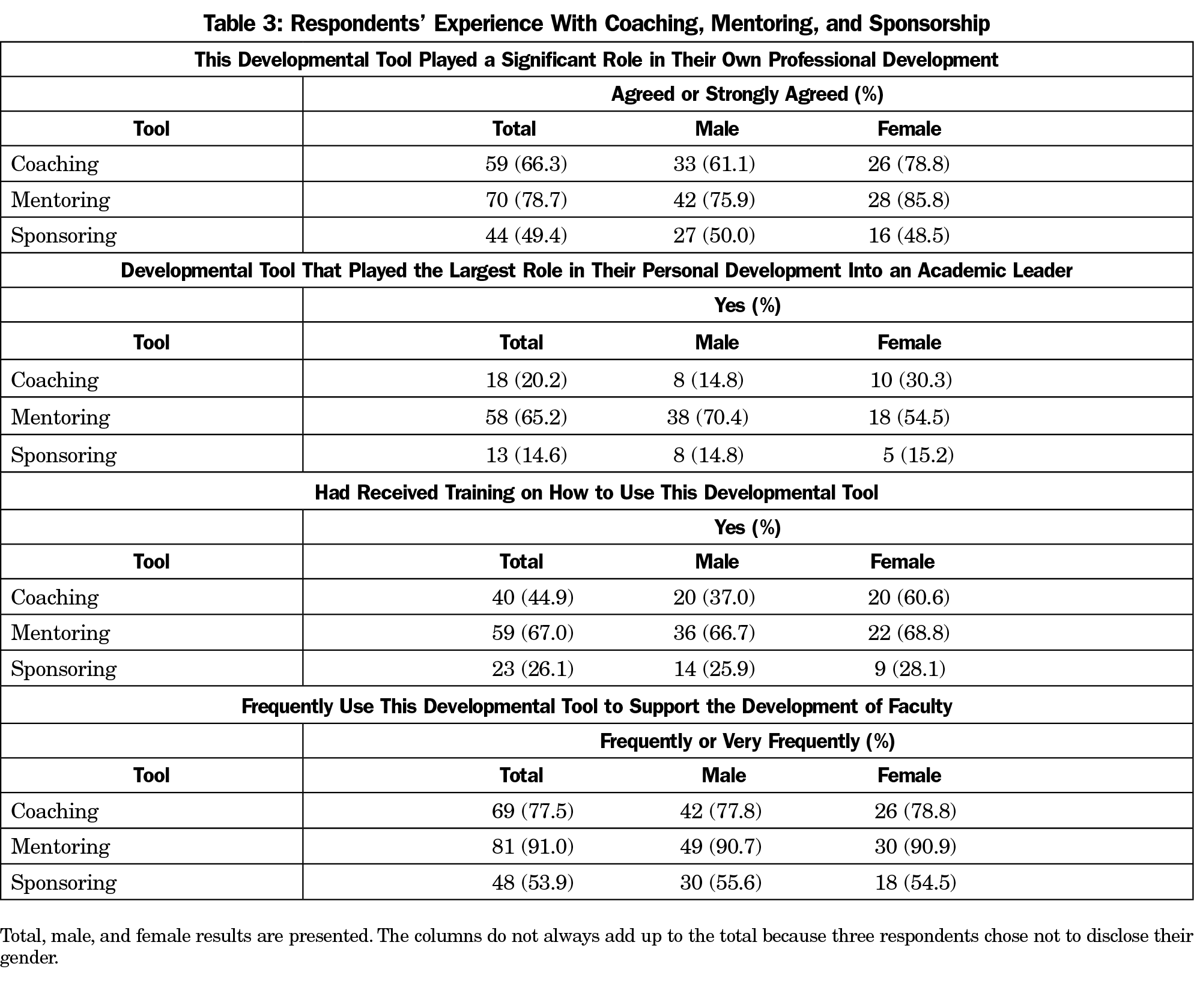 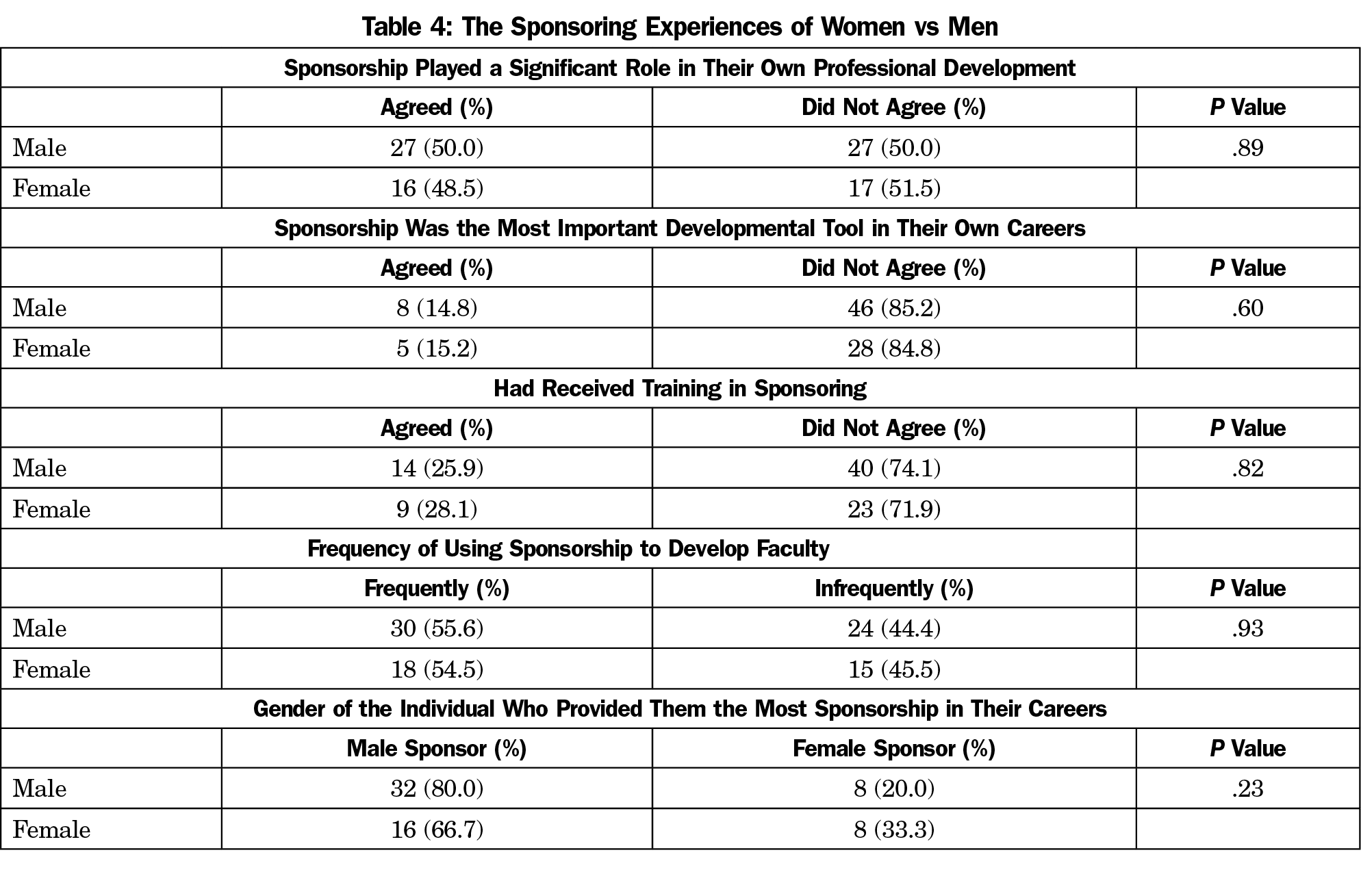 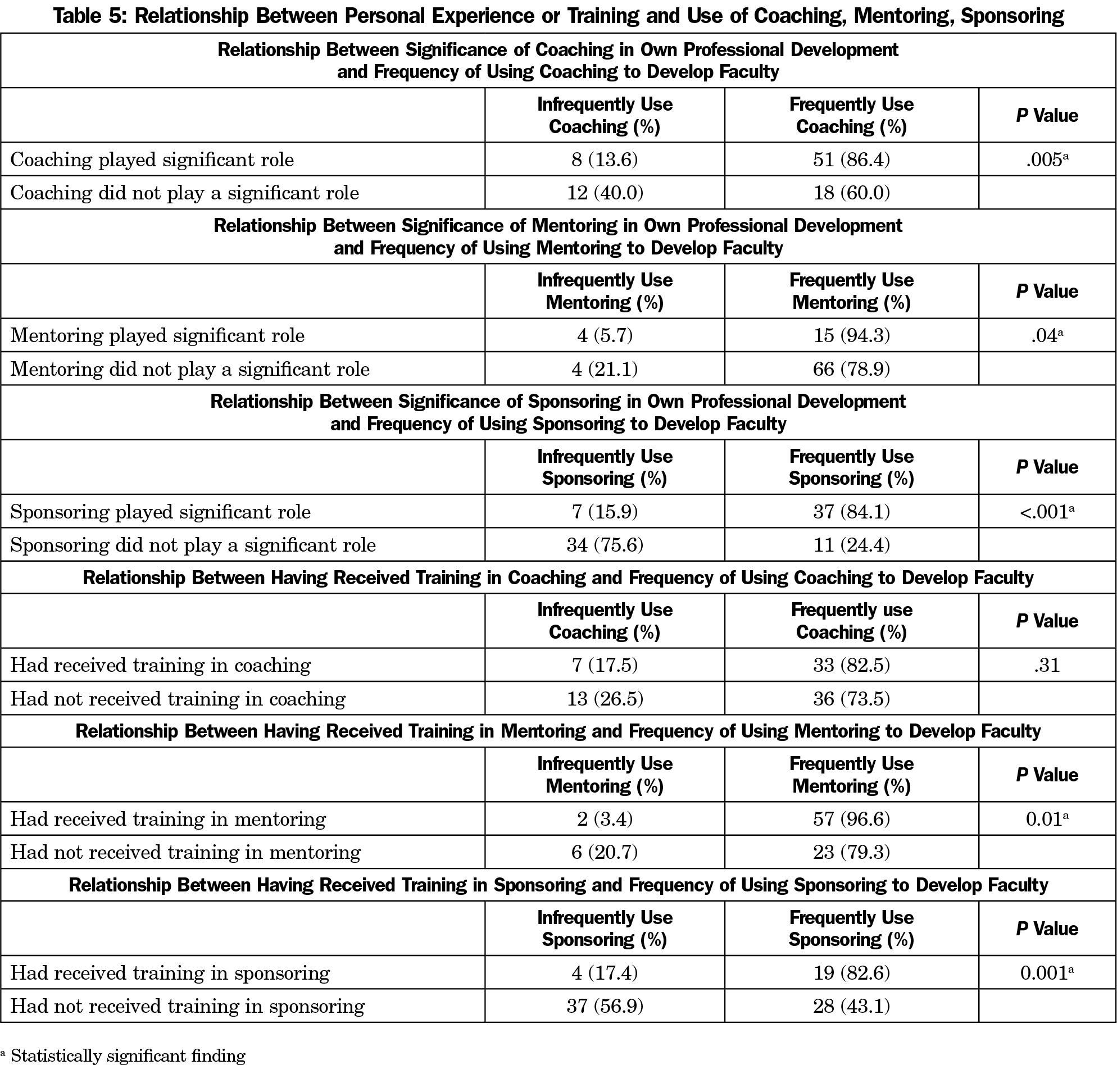 Among the respondents, benefiting from one of these tools during one’s career is associated with increased use of that tool as an academic leader. It makes sense that gaining firsthand experience of the beneficial effects of developmental tools could lead to an increased likelihood of using that tool to develop others. This suggests that current academic leaders should attempt to use all of these tools in a balanced manner when working on career development, so that tomorrow’s leaders will use them.

Training was associated with more frequent use of mentoring and sponsoring, but not coaching. While the cross-sectional nature of this study did not allow a determination of causality, it is logical to conclude that training led to increased use. It is possible, however, that those chairs who use mentoring and sponsoring frequently also actively seek out training on these topics. It is unclear why training in coaching was not associated with an increased use. This may be a result of an overall small sample size.

Among survey respondents, there was no evidence that women have a different experience from men when it comes to sponsoring. This finding is somewhat surprising given that sponsoring has been specifically referenced in the literature as a way to advance the careers of women in academic medicine. Therefore, the authors expected that women who have attained a prominent academic position would have received more sponsoring in their careers. However, much of the literature suggesting this use has spoken of the idea theoretically, citing little specific research, because little exists.6,9,18 It is possible that such a difference does indeed exist among women in academic medicine who have not yet achieved a position such as chair of a department, but is not present at the level of department chairs. The chairs in our survey were relatively older, supporting this notion. It is also possible that this study’s sample did not include enough women to detect subtle differences in their experiences. A post hoc analysis showed that the study had inadequate power to detect small difference in responses between males and females.

Our study has some specific strengths including a relatively high response rate for a survey of department chairs. This is the first study to compare academic leaders’ personal experiences with these three developmental tools to one another. The study also has limitations, including that only one specialty, and only one leadership position within that specialty, was represented in the sample. The experience of other specialties, and academic leaders in a position other than department chair may be different. Perhaps sponsorship is more important for women in specialties that have historically been more male-dominated than family medicine. It is possible that even given definitions, not all survey respondents share a view of what these three terms mean. Gender options in the survey included: “male,” “female,” “other,” and “choose not to disclose.” No specific transgender options were given. All cross-sectional surveys are subject to biases such as recall bias and desirability bias. Only association, and not causation, can be shown with this methodology.