Perceptions and Experiences of Family Physicians Regarding Firearm Safety Counseling

Background and Objectives: Despite the growing rate of deaths caused by firearms, it is not clear what role physicians should play in counseling patients about firearm safety. This study aims to delineate the perceptions and experiences of family physicians regarding firearm safety counseling.

Methods: Data were gathered as part of the 2020 Council of Academic Family Medicine’s (CAFM) Educational Research Alliance (CERA) survey of family medicine practicing physicians. Participants were practicing physicians and members of one of four major academic family medicine organizations comprising CERA. The survey was delivered to a sample of 3,665 family physicians between January 15, 2020, and March 2, 2020. This was a mixed-methods epidemiological study that analyzed quantitative and qualitative survey data. We calculated a χ2 test of independence to examine interactions between demographic characteristics and beliefs and perceptions about firearm safety counseling.

The annual national death rate from firearms in the United States grew from 10.3 deaths per 100,000 total population in 2005 to 12.0 in 2017.1 Based on these alarming statistics, the issue of physician-initiated counseling for patients on firearm safety has been raised in many different health care and policy forums.2-4 Specifically, the American Academy of Family Physicians’ policy statement on gun violence purports that this is a national public health crisis and recommends screening and educating patients.5 Other literature also points toward a compelling need for education among primary care providers when it comes to firearm safety counseling.3-9 However, it is not clear what educational resources are recommended or how physicians should counsel their patients on firearm safety. One study of pediatric residents identified barriers to firearm safety counseling as residents being unfamiliar with what information to provide about safe storage devices, which led to feelings of discomfort and a lack of confidence in counseling patients.6 Another study of pediatric and other primary care providers in a large urban area found that there was a significant discrepancy in physicians’ perceptions about the need to counsel patients on firearm safety and their actual behavior when it came to counseling their patients.9 It was also found that pediatricians were more likely than family physicians to provide firearm safety counseling to patients when they knew that there were children in the home where firearms exist.10 The issue of gun violence has become so prominent that providers from non-primary care specialties have joined in on the discussion and many are calling for more physician-initiated discussion around this issue.7,8 Moreover, a policy paper published by the American Medical Association agreed that physicians should engage in discussions about gun violence.11

Despite the growing rate of deaths caused by firearms in the United States and the compelling need for the role of health care providers in providing firearm safety counseling, it is not clear how family physicians view their role in this regard, what training they have received, or what experiences they have had when it comes to this needed practice. This national survey study aims to better understand the perceptions and experiences of family physicians regarding firearm safety counseling.

Participants were included if they were active members of the major academic family medicine organizations that comprise CERA. As this was a survey for the general membership, program directors, clerkship directors, and department chairs were then excluded. Additionally, the survey contained qualifying questions to ensure that only practicing physicians were surveyed. Invitations to participate in the study included a personalized greeting and a letter signed by the presidents of each of the four sponsoring organizations with a link to the survey, which was conducted through the online program SurveyMonkey. Nonrespondents received five requests, with the final request sent at 2 days before closing the survey, to complete the survey via SurveyMonkey. The survey was distributed to 3,791 candidates. Of these, 10 were returned as undeliverable email addresses and nine were excluded who had previously opted out of receiving surveys from SurveyMonkey. Additionally, 116 respondents did not meet the qualifying questions and were excluded from further survey questions. The survey was delivered to a final sample of 3,665 family physicians (3,541 US and 124 Canadian) between January 15, 2020, and March 2, 2020.

This is a mixed-methods epidemiological study that analyzed quantitative and qualitative survey data. We performed descriptive statistics for demographic data as well as categorical variables using Microsoft Excel version 16.35. We calculated a χ2 test of independence to examine relationships between categorical variables as well as demographic data. We set significance level at .05; we analyzed data using SAS 9.4 statistical software (SAS Institute, Cary, NC). We coded qualitative data in the form of open-ended responses to survey questions for themes and sorted them into categories to draw out patterns from family physicians’ beliefs, perceptions, and experiences about firearm safety counseling.

The overall response rate for the survey was 32.52% (1,192/3,665); 92.7% of all respondents answered questions in the set about firearm safety. All respondents were practicing clinicians providing clinical care on a regular basis and all held either an MD or DO degree. Among the respondents of the firearm safety question set, 58.7% were female, 83.2% identified as White, and the majority were younger than 50 years old. See Table 1 for study participant characteristics. 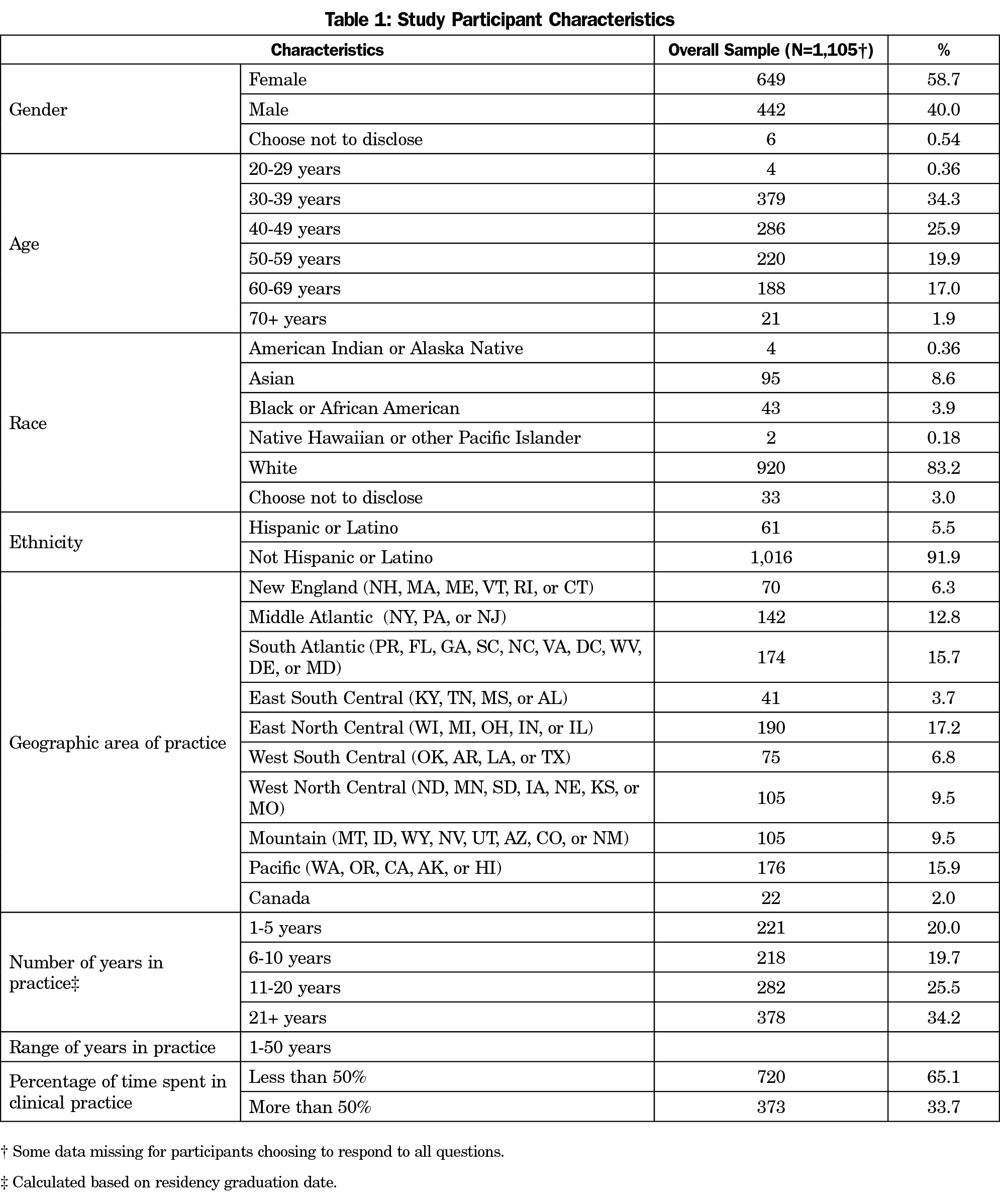 Perceptions and Experiences of Family Physicians Regarding Firearm Safety Counseling

When asked if they thought firearm safety was a public health issue, 93.7% answered yes; 95.3% of participants also felt that family physicians have the right to counsel patients on firearm safety; 91.9% have provided counseling regarding firearm safety to their patients at some point in their clinical career; 53.5% had reportedly received some form of training on firearm safety, and the training they received ranged from education as a medical student to organizational sponsored activities as a practicing physician (Table 2). Other types of training were self-directed and included reading literature from a variety of courses (eg, AAFP website, journal articles) use of firearms (eg, military service, “I am also a police officer,” conceal and carry classes; Table 3).

Survey questions also asked respondents to rate their level of comfort around firearms; 55.9% indicated that they were personally either very uncomfortable or uncomfortable around firearms; 82.3% rated their level of comfort with asking their patients about firearm as either very comfortable or comfortable. However, despite the majority reporting that they were comfortable asking their patients about firearms, 67.9% strongly disagreed or disagreed with the statement, “I am knowledgeable about discussing safe storage devices for firearms with my patients.” Further, only 25% of respondents felt comfortable discussing firearm removal from the home with their patients.

The main barrier to firearm safety counseling identified in this study was time constraints, which was reported by 35.4% of respondents. When asked to specify other barriers that were not reflected in the provided answer choices, respondents commonly referenced politics around gun control as a major barrier while another common response included not wanting to infringe on patients’ rights to own and use firearms. When asked to indicate which approach they thought would be most effective in counseling their patients on firearm safety, 69.7% said that universally screening patients using a validated screening tool would be the best option. Respondents also suggested routinely counseling patients with high-risk factors for gun violence, especially those with mental health disorders and children in the household; 59.3% of respondents were interested in receiving formal training on how to counsel patient on firearm safety if it were available to them, and 48.0% indicated that an online CME course would be the most effective way for them to learn how to provide firearm safety counseling. 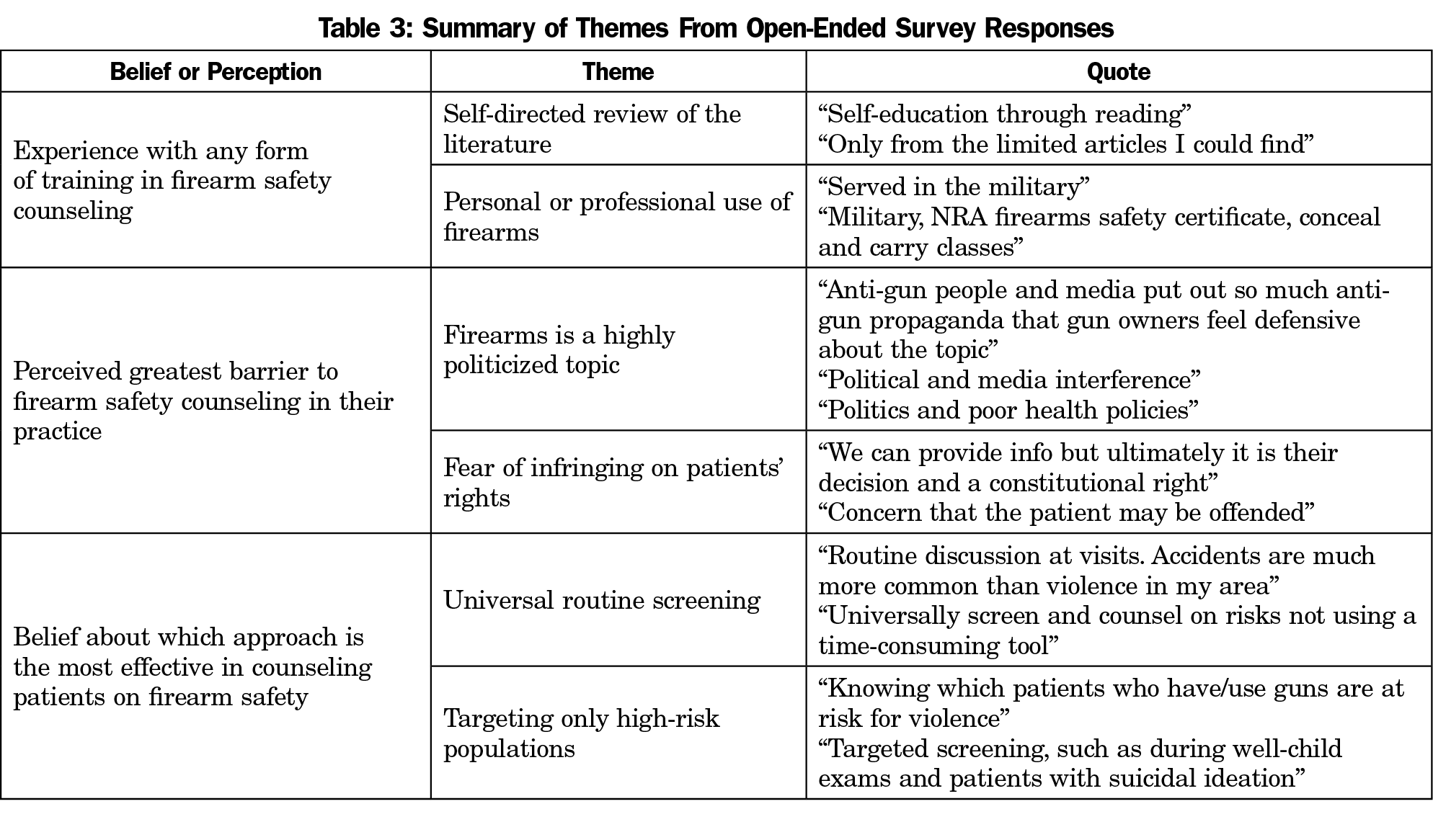 The majority of our study participants viewed firearm safety as a public health issue and also felt that family physicians should have the right to counsel patients on this topic, which is consistent with the existing literature on this topic. However, among our study participants, more than 90% reported that they have counseled patients on firearm safety at some point in their career, which is much higher than what has been previously reported. Other studies reported rates of less than 40%.9,10 Many of the participants in our study had received prior formal training on firearm safety counseling, with most receiving this education during their residency training. Those who had received formal training on firearm safety counseling were found to be more likely to report a higher level of comfort with asking their patients about firearm ownership. This information suggests that family medicine practitioners may benefit from receiving education on firearm safety counseling early in their training. Moreover, an online continuing medical education course may be the best training modality for family physicians facing time constraints in their practice.

Other important findings include study participants’ self-reported lack of comfort and knowledge with specific components of firearm safety counseling, such as educating high-risk patients about safety storage devices and safe removal of firearms from the home. This speaks to the need to increase teaching in these specific areas to family physicians. Moreover, our study found that primary barriers to firearm safety counseling included time constraints during office visits and the perception that patients did not want to receive counseling from their physicians on this topic. Additionally, our study participants felt that using a validated universal screening tool during office visits would be the most effective approach to providing counseling, which could also address the issue of time constraints and also help mitigate the discomfort physicians feel when addressing firearm safety with their patients.

This was a large national survey study of practicing family physicians on a topic for which limited data exists. The findings from this study suggest the need for more education around a much-needed practice among primary care providers. However, there are limitations to our study. This study had an overall 32.52% response rate, which was average, with a response rate of 92.7% for the specific firearm question set. Also, as this was a cross-sectional study, there is the potential for recall bias among survey respondents. Moreover, we were unable to verify whether study participants had ever actually provided firearm safety counseling because there is no consensus on what constitutes firearm safety counseling. Also, White females under the age of 50 years predominately comprised our study population, which raises the concern for lack of diversity among opinions of family physicians in this national survey study. Further, we found that respondents identifying as White were more likely to provide counseling on firearm safety. Due to the limited diversity of our study participants, this finding may not be representative of the general opinion held among family physicians regarding firearm safety counseling. Another major limitation is that the majority of our study participants reported less than 50% clinical time. This may limit the external validity of our study and therefore, limits our ability to broadly extrapolate the study findings to family physicians who have closer to 100% clinical time. However, since the participants in this study are also educators, despite their reported clinical time, they would be able to have the most impact when it comes to changing curricula to address firearm safety counseling among trainees.

Our study aims to inform practice changes in primary care settings where the provider has significant interaction with their patients and can provide continuous counseling on firearm safety over a longitudinal course. Therefore, this study has important clinical implications, especially for primary care providers who see patients with mental health disorders and those who have patients who are children living in households where firearms are stored and used.

This is a unique study that addresses a timely and relevant topic. Firearm safety is an important public health issue and more education is needed around physician-initiated firearm safety counseling. The findings in this study present an opportunity for medical providers to prepare a consensus statement on the need for formal education around firearm safety counseling. We encourage other medical specialties to conduct a similar study to survey their constituents to allow for the evidence to drive changes in their respective practices.

The authors acknowledge Ojesh Upadhyay, MPH for his guidance and support with the χ2 statistical analysis.