Background and Objectives: HIV preexposure prophylaxis (PrEP) has been purposefully incorporated into our family medicine resident training within existing didactic lectures, readings, and routine office visit precepting. This mixed-methods evaluation assesses training strategies for PrEP use via survey and drug use evaluation (DUE).

Methods: We surveyed 80 current and former family medicine residents (2014-2018) about their exposure to training components, self-reported confidence and competency in PrEP use, and practice behaviors reflecting CDC guidelines for patient eligibility and testing. In addition, we conducted a DUE of patients receiving PrEP from 2012-2018 for adherence to CDC guidelines. We report results with descriptive statistics, with χ2 analysis for group comparisons.

Results: Survey response rate was 56.3%. Among respondents, 46.7% have prescribed PrEP and 55.5% self-assessed as competent to prescribe PrEP, with the majority (84%) rating precepting as most effective for building competence. Those self-assessed as competent were more likely to endorse practice behaviors reflecting CDC guidelines for monitoring PrEP (P<.05). DUE identified 68 patients; 98.5% men who have sex with men. No women with recent sexually transmitted infections, nor persons who inject drugs (PWID) received PrEP. Initial testing completion ranged from 79.4% (HIV) to 54.4% (hepatitis B). Follow-up testing completion ranged from 41.5% (HIV) to 26.4% (syphilis).

Conclusions: Residents rated precepting as the most effective training. However, DUE demonstrated that PrEP underuse, as well as suboptimal testing, limited experiential training on CDC guidelines. Curricular updates should further emphasize appropriate patient selection for PrEP, including women, minorities, and PWID, as well as robust testing, to continue expanding PrEP access.

Preexposure prophylaxis (PrEP) antiviral therapy is recommended to prevent HIV transmission in sexually active persons with risk factors and in persons who inject drugs (PWID).1,2 In 2017, only 8% of 1.2 million adults eligible per Centers for Disease Control and Prevention (CDC) recommendations used PrEP.3,4 Only 2%-9% of men who have sex with men (MSM) have ever used PrEP.5,6 Increasing PrEP coverage to 40% among indicated MSM could avert 33% of expected HIV infections.7 Patients taking PrEP remain at risk for HIV, STIs, and nephrotoxicity, among other risks, necessitating ongoing counseling, monitoring, and follow-up.1,8

The American Academy of Family Physicians included PrEP in its 2016 HIV infection/AIDS curriculum guidelines.9 However, a purview paradox exists: neither primary care physicians (PCPs) nor HIV providers consider PrEP within their domain.10 PCPs reported limited knowledge and confidence about PrEP compared to HIV providers, although 75% of PCPs were willing to prescribe PrEP if trained.11 To our knowledge, this mixed-methods evaluation is the first report of resident training strategies for PrEP and endorsement of practice behaviors reflecting CDC guidelines in a residency-training clinic.

Our site is an urban family medicine residency practice where 51.4% of patients are Black; 40.1% are White. Payer mix consists of 53% commercial, 38% Medicaid/Medicare, and 9% uninsured/self-pay. The practice has prescribed PrEP since 2013 but does not provide medication directly. We incorporated PrEP education into the residency curriculum through readings and by adding PrEP content to existing resident didactic lectures on HIV, preventive medicine, and care of LGBTQIA+ patients. Faculty champions also trained residents in prescribing PrEP during office visit precepting and contributed to PrEP information dissemination.12

We completed two independent evaluations to assess PrEP learning: (1) a survey collecting self-assessed training exposure, confidence and competence in PrEP use, and endorsement of practice behaviors reflecting CDC guidelines for patient eligibility and monitoring; and (2) a retrospective drug use evaluation (DUE) chart review of CDC guideline adherence and prescribing practices, assessing the quality and quantity of opportunities for experiential office-based education.

The DUE reviewed patients prescribed tenofovir-emtricitabine (TDF-FTC, Truvada) for PrEP from July 1, 2012 to June 30, 2018. Patients receiving at least one refill were included in assessment of follow-up testing. Chart review assessed adherence to CDC guidelines, including those related to HIV, sexually-transmitted infections (STIs; chlamydia, gonorrhea, and syphilis), renal function, hepatitis B, and pregnancy.1 Chlamydia and gonorrhea were always tested together, and testing was deemed completed if at least one body site (pharyngeal, rectal, or urine sample) was tested. Medication access was not assessed.

Our permissive definition of initial testing window was 4 weeks before or 1 week after initial PrEP prescription. Adherence to each follow-up testing recommendation was defined as test completion in at least 80% of subsequent 6-month intervals while on therapy. For example, a patient receiving PrEP for 2.8 years would have five 6-month follow-up intervals. If renal monitoring was done at three of five refill visits (60% of intervals), this was considered as nonadherent to follow-up testing for renal monitoring.

Results are reported with descriptive statistics, with χ2 analysis for between-group comparisons. Study authors conducted the survey and DUE. The UPMC Quality Improvement Review Committee approved this project.

Forty-five respondents completed the survey (56.3%), including 33 graduates (73.3%). Forty-one experienced at least one teaching modality (91.1%); 21 reported currently prescribing PrEP (46.7%). Overall, 25 self-assessed as competent to prescribe PrEP (55.5%), of whom 21 rated precepting as most effective for building competence (84%, Table 1). Participants who reported exposure to all three training modalities were significantly more likely to self-assess as competent than those exposed to less training (P<.05). Additionally, those who self-assessed as competent were significantly more likely to endorse four or more PrEP practice behaviors (P<.05, Table 2).

During the study period, 68 patients were prescribed TDF-FTC for PrEP; 53 were included in follow-up testing analysis, and 15 were lost to follow-up. Patient demographics include White (82.3%), Black (11.8%), Asian (4.4%), and Hispanic/Latinx (1.5%); the median age was 35 years, and all were LGBTQIA+ community members, including 66 MSM (97%), one transfeminine patient who has sex with men (1.5%), one woman whose female partner is serodiscordant (1.5%). No women with recent STIs nor PWID received PrEP. 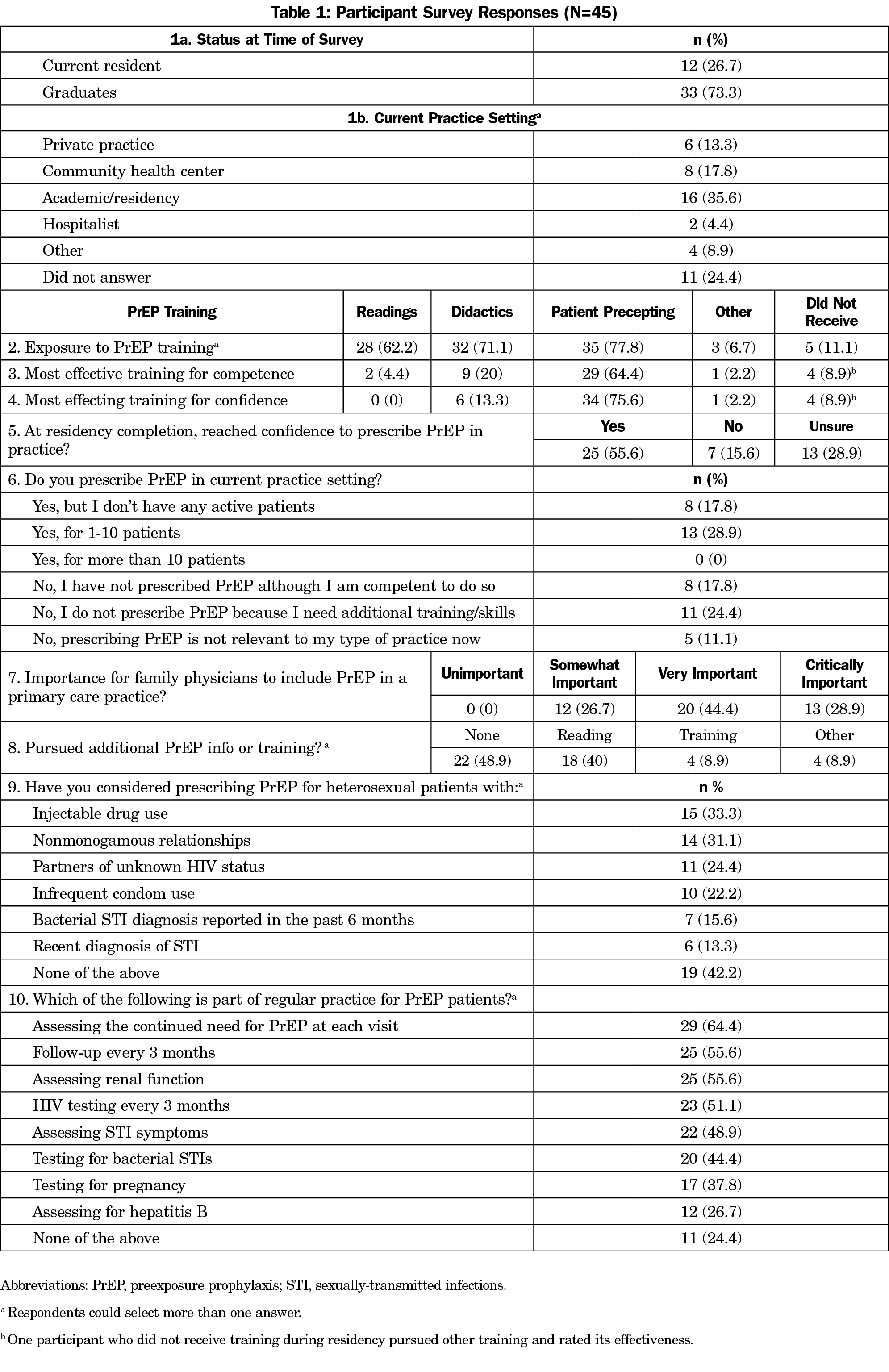 Developing strategies to train PCPs on PrEP is integral to expanded PrEP access. After our program incorporated PrEP education into existing lectures, offered readings, and discussed PrEP use in the course of precepting usual care, roughly half of residents and graduates endorsed competence and reported prescribing PrEP in their practice. Despite this, significantly fewer patients with non-MSM risk and minorities were offered PrEP in our residency clinic practice.

Future training should emphasize offering PrEP to patients with non-MSM risk, and minorities. PWID and non-MSM patients account for nearly one-third of HIV diagnoses, but only 2.9% of patients receiving PrEP in our practice.13 HIV disproportionately affects minority populations, with Black patients representing 42% of new HIV diagnoses, yet only 11.8% of our patients prescribed PrEP were Black—a much lower proportion than our practice population.4,13 Broad underutilization of PrEP not only compromises prevention efforts, but also the availability of experiential learning, which residents identified as most useful for achieving competency.

Our training assessment is limited by self-reported data with a 56.3% survey response rate, the majority being graduates, potentially indicating nonresponse bias. Also, recall of training modality exposure may have been affected by length of time since training.

Other community clinics offer free STI screening, and our inability to share lab results across clinics may contribute to the reports of suboptimal testing, but that would not explain poor adherence to CDC guidelines at baseline. Suboptimal testing at initial and follow-up encounters, especially for HIV, STIs, and renal function, is especially concerning and requires immediate attention. Although we used a strict definition of adherence to testing, we believe adherence to testing may be slightly higher, yet still suboptimal, in real-world practice. A large primary care network reported similar levels of suboptimal PrEP management.14 Clearly, training must address continued adherence to recommended testing.

To provide consistent experiential training via office-based precepting, training and clinic resources must be provided for all precepting faculty, including community preceptors. Lab completion may be increased by use of order sets, availability of in-house phlebotomy, or rapid testing options. Utilizing other members of the health care team such as pharmacists and nurses for assistance with refills and monitoring can improve follow-up testing adherence.8 Additionally, PrEP eligibility screening may be integrated into other visits including contraception, substance use disorder, and testing, notification, and treatment for STIs.15

The authors thank Divya Patel, PharmD, for her assistance with data collection.