Student Perceptions About Benefits From an Extracurricular Curriculum:

A Qualitative Study of the Underserved Pathway

Introduction: Too few medical graduates choose to care for underserved populations. This qualitative study explores medical student perceptions of the benefits of participating in the Underserved Pathway (UP), a 4-year extracurricular program designed to nurture interest in, and develop skills to serve vulnerable populations.

Methods: Fourteen of 28 graduating students in the class of 2013 who completed the UP were interviewed. Using conventional qualitative content analysis, an iterative process was used to code transcriptions until there was high concordance among the assigned codes. The research team analyzed the data for common themes, theme saturation, and unique perspectives.

Results: Four major thematic areas emerged: 1) the underserved curriculum scaffold, 2) influence on career choice, 3) influence on residency choice, and 4) capacity to match. Of all participants, 78.6% thought the UP influenced their career choice, 64.3% stated the UP played a role in residency choice and rank, and 85.7% thought participation in the UP would improve match success. No single curricular component of the UP was individually responsible for career or specialty choice, or as being most useful to student understanding of the underserved.

Conclusions: Students noted that participation in the UP provided them with a scaffold to support their interest in underserved careers, and influenced their specialty and residency choice. They also perceived it as making them more competitive as residency applicants. This study provides medical educators with insight into the importance of building robust frameworks, even extracurricular ones, to support student interests in serving vulnerable communities.

Despite prematriculation interest in serving vulnerable populations, too few students choose a career serving the underserved.1-3 Student altruism (measured as empathy, professionalism, idealism, or, inversely, as burnout) diminishes yearly, suggesting that curricula do not sustain interest in serving the underserved.4-10 Health professions programs that prioritize service show success in retention of values and future careers in underserved communities.11-13

Studies of extracurricular programs for medical students focus on knowledge or skill acquisition.14-19 Some comprehensive curricula focused on producing rural physicians have shown success.20-22 Others demonstrate associations between extracurricular participation and matching to family medicine residencies.17,19

But what do medical students find beneficial from extracurricular participation? This qualitative study explores perceptions of medical students participating in an extracurricular program designed to encourage practice with vulnerable populations. Asking about the benefits of participation and the impact on residency and career decision-making, this study seeks to contribute to the discussion of ways to increase the numbers of students who enter careers caring for underserved populations.

Setting: The University of Washington School of Medicine (UWSOM) Underserved Pathway (UP) is a 4-year extracurricular experience that employs a variety of educational modalities and asynchronous learning techniques to foster and maintain student interest in caring for underserved populations (Figure 1). The UP integrates mentorship, service learning, preceptorships, clinical rotations, scholarship, and live and online content into a structured curriculum. Between its inception in 2008 and 2016, 304 students have completed the UP. As of the 2016 academic year, the UP has over 225 participating students distributed through the 4 years of medical school. Completing students receive a certificate and acknowledgment in their Medical Student Performance Evaluation (MSPE) letter.

Research Team: The research team was three UP faculty with experience in qualitative research and two medical students. A single faculty member (DVE) interviewed all participants and had no longitudinal relationship with study participants. As UP faculty, DVE had periodic interaction with some of the participants including direct teaching of in-person modules and responding to online assignments. The coding team consisted of two UP faculty (DVE, SD), and a second year medical student (BK). Transcripts were de-identified to the coders.

Participants: Students of the graduating class of 2013 who were projected to complete the UP were eligible. Students enrolled in the UP but not projected to complete all the requirements were excluded. Twenty-eight students met eligibility criteria. Participation in the study was voluntary. No inducements were offered. We contacted eligible students by email up to three times. Students who were eligible to participate and did are called “the study group.” Students who were eligible to participate and did not choose to interview are called “UP study nonparticipants.” The total UWSOM 2013 graduating class, including the 28 UP students, is called the “2013 graduating class.”

Instrument: We used a semistructured instrument for the interviews (Table 1). All participants were asked each question, and the interviewer had latitude to explore and probe responses. Interview content focused on influences on career choice and residency choice. The interviewer investigated the impact of specific components of the pathway, as well as of other medical school curricular and extracurricular offerings.

Using principles of conventional qualitative content analysis, and consistent with standards developed for qualitative research, we used an iterative coding process.23-27 Transcripts were coded by three investigators (DVE, SD, BK) between February and July 2013. Each investigator independently coded an initial subset of five transcripts. Using a phenomenological approach, coding was initially open ended.28 The three investigators then discussed, modified, and reconciled the codes, reaching consensus and generating a common coding lexicon. Following development of a common lexicon, all transcripts (including the initial subset of five) were coded independently by the investigators. Meeting monthly, investigators reviewed the coding in this iterative process until there was high concordance among the assigned codes on all transcripts.24-26 Using the Dedoose software tools, we then analyzed the data for common themes, theme saturation, and unique perspectives. 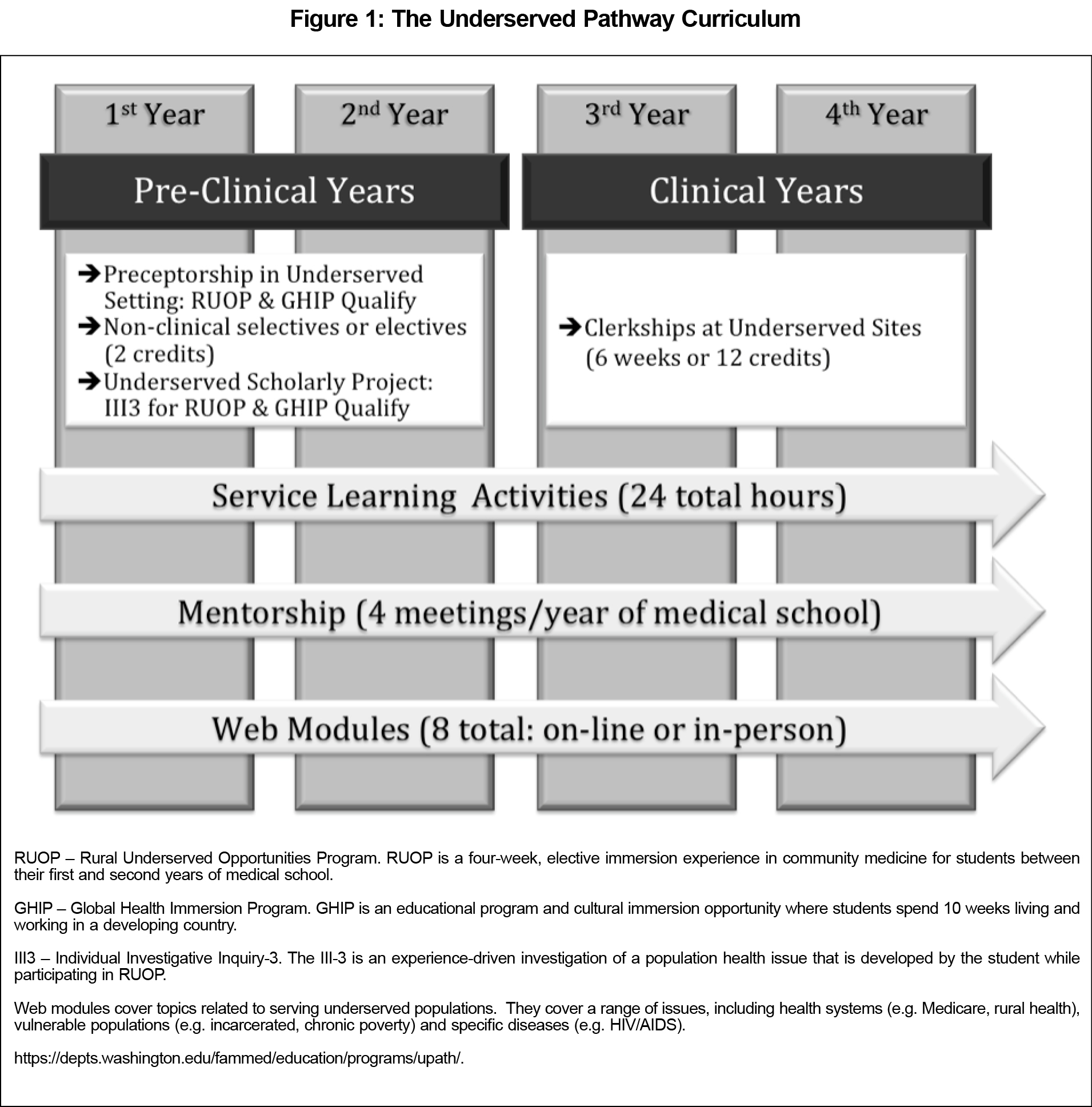 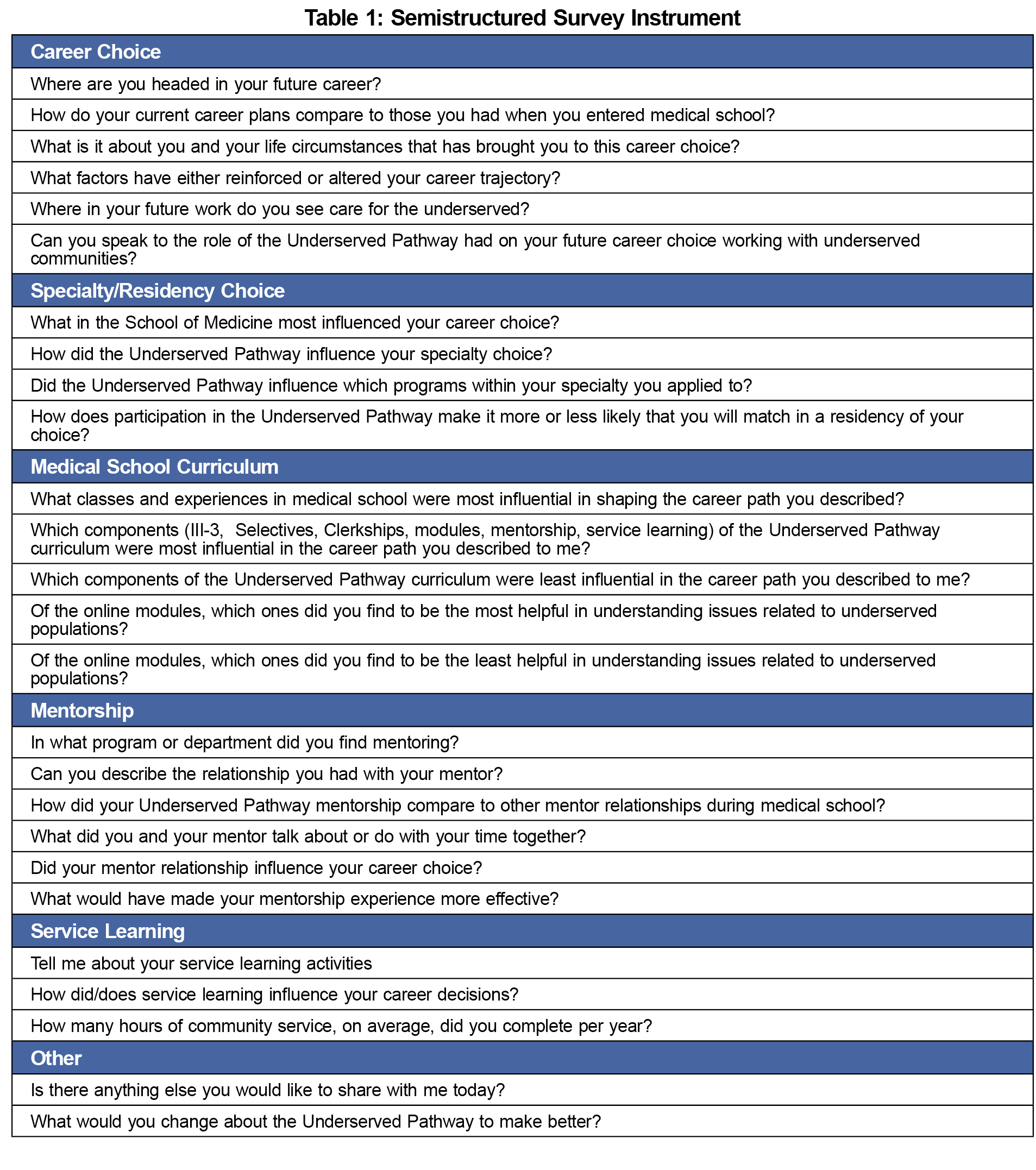 Demographics: Fourteen of 28 eligible UP graduates were interviewed (the UP study group). Mean interview length was 32 minutes (range 22-52 minutes). The UP study group and study nonparticipant group had more female students (71% and 80% respectively) compared with the 2013 graduating class (57%). No demographic characteristics had statistically significant differences. 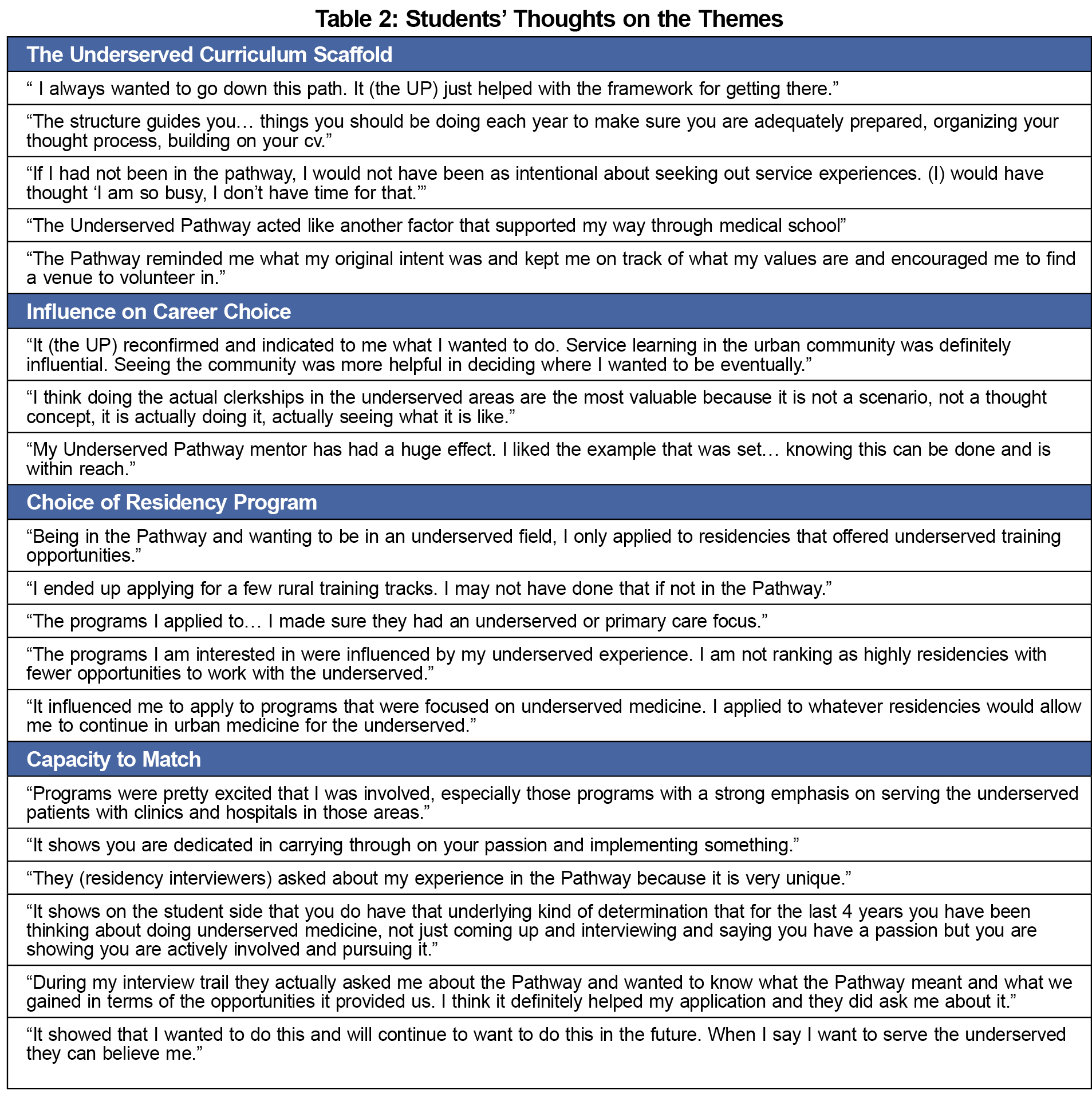 Studies suggest that medical school experiences in underserved settings promote future practice with vulnerable populations.29,30 What do students value from extracurricular programs designed to support career choice to work with the underserved?

This qualitative study identified four themes for perceived value of this extracurricular program. With the exception of mentorship and the online curriculum, the UP is composed of curricular and extracurricular options available to all UWSOM students, yet participation appears to provide a scaffold supporting interest in underserved careers with the organized framework of the UP adding value; the value of the whole exceeded that of its individual parts.

There are limitations. Small sample size and being a single program at one institution limits generalizability. Second, selection bias might exist because of institutional value placed on primary care and addressing the health care needs of this rural five-state region. Participants volunteered to participate in the UP and to be interviewed. Third, two members of the coding team (DVE, SD) had interactions with the study participants outside of the study, with possible previous knowledge of student characteristics that could influence coding decisions. Minimizing this, transcripts were de-identified prior to coding, the coding team included a student without prior knowledge of participants, and an iterative coding strategy was used. Lastly, no control group was interviewed; comparisons to other students cannot be made.

Robust extracurricular efforts can support student interests in serving vulnerable communities. The educational scaffold created by these programs reinforces interests and may decrease attrition from underserved careers, ultimately leading to a more robust primary care workforce in underserved communities. Future work might include replication of this program elsewhere and analysis of similar programs at other institutions.

The authors would like to thank Jan Carline, PhD for his assistance with obtaining and analyzing the demographics of the contrast groups in this study.

Presentations: Portions of the material submitted for publication were presented at: