Introduction: Physicians need to foster healthy relationships with patients to optimize care, with time constraints and workloads being barriers. Studies have shown the importance of first impressions, which are influenced by attire. Studies of physician attire have previously been conducted in metropolitan populations. This study’s goal was to investigate patient preferences for physician attire among rural populations.

Methods: A cross-sectional study of patients was conducted in waiting rooms of five ambulatory clinics dispersed throughout rural northern Michigan. Anonymous surveys contained a series of photos of a male and a female physician, with photos within the series differing only by apparel. Participants indicated which male and female physician they would prefer in various scenarios. Participants provided demographic information and indicated their own physician’s usual attire. Responses were analyzed using comparative statistics and logistic regression.

Results: Survey response rate was 78% (92/118). Similar to metropolitan studies, patients preferred professional attire including white coat in almost all scenarios. For most scenarios, participants preferred professional attire for both male and female physicians, however respondents were more tolerant of casual attire for female physicians. Older participants and those whose physician dressed casually tended to be more tolerant of casual attire. Patients preferred surgical attire only in emergency situations.

Conclusions: This study of a rural population showed a clear preference for professional physician attire. In general, rural physicians should consider wearing professional attire with white coat in order to best meet patient expectations. Further investigations are needed to enhance the generalizability of study findings.

Physicians need to establish rapport, gain trust, and provide quality care, all within a busy environment. In busy settings it is often imperative for physicians to make a good impression quickly. Appearance plays a role in the formation of an observer’s initial opinion,1 especially in professional settings.2 Previous studies have shown that physician attire is an important factor for patient trust, confidence, and satisfaction.3-6 Importantly, patients are more likely to disclose personal information and incorporate physician recommendations when they view physicians as competent, supportive, and respectful.7

Previous research has shown that patients generally prefer traditional attire for physicians, specifically a white coat.8-17 These studies were conducted in metropolitan populations however. Values and perceptions of rural patients may differ from their urban counterparts. As 20% of the nation’s population is rural, understanding rural preferences may help interested physicians better meet patients’ expectations.

Researchers conducted a cross sectional study utilizing a previously validated and published survey on physician attire.6 The surveys contained a series of pictures depicting both a female and male doctor. The only difference between each series of photos was the attire the two physicians wore; facial expressions, hairstyle, stance, and jewelry were identical. The pictures contained four different categories of attire for each gender: business, professional, surgical, and casual. Table 1 describes each category.

The surveys contained 14 questions for both the female and the male set of photos. Examples of survey questions included “Which would you prefer to be your family doctor? Which of these doctors would you trust the most? Which of these doctors would you expect to be more responsible?”. For all questions, patients were instructed to mark the box under the picture that corresponded to their preference. Participants also completed demographic information and indicated which type of attire their personal physician typically wore.

Surveys were distributed during a three-month period in 2014 to outpatient clinics in rural northern Michigan, including two family medicine clinics, an internal medicine clinic, a general surgery clinic, and an OBGYN clinic. Employees were instructed to distribute surveys to adult clients in the waiting room randomly throughout the workday. Completed surveys were collected anonymously, and response rate was calculated based on the number of surveys distributed and those returned. All surveys clearly marked by patients were used in the analysis.

Results were analyzed using chi-square or Fisher’s exact test as appropriate. The responses for female physician and male physician attire for each scenario were compared using the McNemar-Bowker test. Binary logistic regression was used to compare the contribution of significant variables. Data was compared using SPSS Statistical Software Version 23, with significance for all analyses set at p<0.05. The study was approved by Munson Medical Center’s IRB.

A total of 118 surveys were distributed, with 92 surveys returned (response rate 78%). Respondents were 76% female. The majority of participants were Caucasian (92.4%), which is reflective of the region’s population. Of study participants, 49% had a degree higher than a high school diploma. Table 2 describes participant demographics. 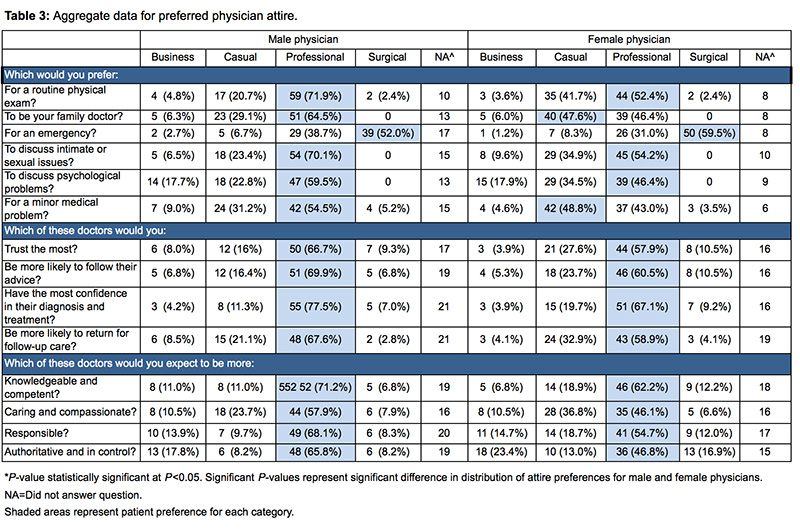 Although rural patients preferred professional physician attire, there was a higher tolerance for casual attire compared to previous metropolitan-based studies.6 This trend was strongest among patients who indicated their own physicians dressed casually. It may be that patients become accustomed to the appearance of physicians in their community, affecting expectations. In addition, rural populations may have a more relaxed view of society and may place less emphasis on attire, resulting in more tolerance for casual apparel. Physicians are often well known in small communities, and familiarity may break down traditional hierarchal separations that may exist in larger communities. Regardless, despite this trend toward some tolerance for casual apparel, in most situations rural patients expressed a preference for physicians to dress professionally.

The study is limited in generalizability in that all respondents were surveyed in rural northern Michigan. Future studies could focus on diverse geographical locations and include more ethnic diversity. Study was also limited by the use of self-reported data rather than observing actual behavior. The research methods used in this study relied on a two dimensional view that did not delve into other important attitudinal or experiential factors that contribute to a person’s perception, which could have impacted results. It is also unclear whether a physician’s attire remains important once a relationship is established. A final important limitation of the study is that the female series of photos depicted a female physician in surgical attire, a skirt, or a dress. This was true even with casual attire, which was a casual appearing denim dress. These photographs were used to allow comparison to the previously published metropolitan-based study, but may be why participants were more tolerant of casual attire specifically for the female physician when compared to the male. Due to this limitation, logistic regression comparing participant demographics and attire preference was performed using only the male physician model.

In conclusion, this study of a rural population demonstrated a preference for professional physician attire. In general, rural physicians should consider wearing professional attire with white coat in order to best meet patient expectations, especially when relying on a first impression. Further studies to increase generalizability of findings are needed.

Dr. O'Connor, Thank you so much for the words of support. I am a rural doctor (and my husband was a former NHSC scholarship recipient too). I think that the familiarity in small towns can give the impression that more casual behavior is expected, especially to those not as familiar with the culture. But professionalism in familiar settings may be more important rather than less so--symbols like the white coat, using formal titles, and having the utmost respect for patient privacy are things that help us balance the dual relationships that are inevitable when caring for, and within, our own communities. Thank you for reading! Andrea Wendling, MD Boyne City MI

Dear authors: This gem of an article mirrors my experience working with the NHSC in a town of 900 in South Dakota. I was there from 1978-1980. A friend and I were replacing the docs that had finished their tour of duty. The outgoing physicians told us that casual attire with OK with the patients, who were solid country folks who appreciated doctors who dressed like them. We decided to dress like 'real' doctors with formal slacks, leather shoes, dress shirt, occasional tie and even more rare suit coat. Never jeans, boots or tennis shoes unless hunting One day a patient said 'Thank you for dressing nicely. The other doctors didn't. It seemed like they didn't cared about us! I still dress that way. I care about my patients. However, I am ecstatic neck ties are not sanitary! Your research mirrors my experience. Thank you for the flash back! Jeff O'Connor, M.D. Spokane WA