Methods: We conducted structured interviews of residents from 2011-2012 through 2013-2014. Interviews were recorded, transcribed, and analyzed for themes.

Results: Fifty-eight interviews were conducted, including 18/18 residents in 2011-2012 (100%), 18/20 residents in 2012-2013 (90%), and 22/22 residents in 2013-2014 (100%). Following introduction of the 24-hour work limit, upper year residents reported significantly less fatigue and improved personal lives, patient care, and educational experience. Reactions to NF varied with length and intensity of the NF rotation; most PGY-1 residents reported increased fatigue, more burnout, and worse personal lives on NF. Most residents felt patient care quality on NF did not differ from non-NF rotations because improved inpatient nighttime continuity mitigated effects of fatigue and increased care transitions. Reactions regarding educational experience on NF were initially negative, but improved over time.

Conclusions: Residents’ reactions to 2011 ACGME work hour rules suggest the rules improved resident well-being, except on NF. Negative effects of NF may be minimized by limiting NF rotations to 5 nights/week for 2 consecutive weeks, and 1 month total per academic year.

Attempts to assess effects of the 2011 regulations have yielded variable results. One systematic review found no overall improvement in patient care or resident well-being, and negative educational impacts.4 Another stressed significant limitations of current studies.5 As stakeholders in this debate, residents may provide valuable feedback. Our review of studies assessing residents’ perceptions6-21 found that most identified improved resident well-being, worsened education, and unchanged patient care. Almost all used only surveys to obtain resident input. Most studied only general surgery,6,17,20 internal medicine8,9,10,19,21 or pediatric14,15,18 residents. None report resident perspectives beyond a 1-year period under the new rules.

Given the lack of studies of family medicine residents, whose training differs significantly from other specialties, we were interested in resident reactions to changes implemented in our residency to comply with 2011 regulations. Changes included residents no longer having office hours or rotation responsibilities after a night on call, and the introduction of night float (NF) rotations. We chose semistructured interviews over a 3-year period to obtain meaningful resident feedback that could inform curricular decisions.

We conducted this study over 3 academic years (2012-2014) at the JFK Family Medicine Residency Program, a community hospital-based program in New Jersey. The program expanded from 18 to 22 residents over the 3 years. Structural changes, including iterations of NF, are summarized in Table 1.

An interview script (Table 2) was developed to prompt input on areas of interest identified in the literature, as well as open-ended feedback. All residents were invited to participate by study author AP at morning reports in June each year. One-on-one interviews were conducted in the Family Medicine Center by authors AP and LG (both clinical faculty at the program) at times convenient to each resident in June/July 2012, 2013, and 2014. Informed consent was obtained.

Interviews were recorded and transcribed verbatim. Authors AP and LG independently coded each transcript. Discrepancies in themes between investigators were resolved through discussion until consensus was reached. Saturation was reached after 50%-60% of interviews each year. Reflexivity was employed by having investigators with different backgrounds (1 physician [AP], 1 psychologist [LG]) code independently, then challenge each other’s preconceptions during analysis. We did not use qualitative analysis software in data analysis. Quote samples chosen were either most descriptive of a common theme or an unusual perspective. Study approval was obtained through the JFK Medical Center Institutional Review Board. 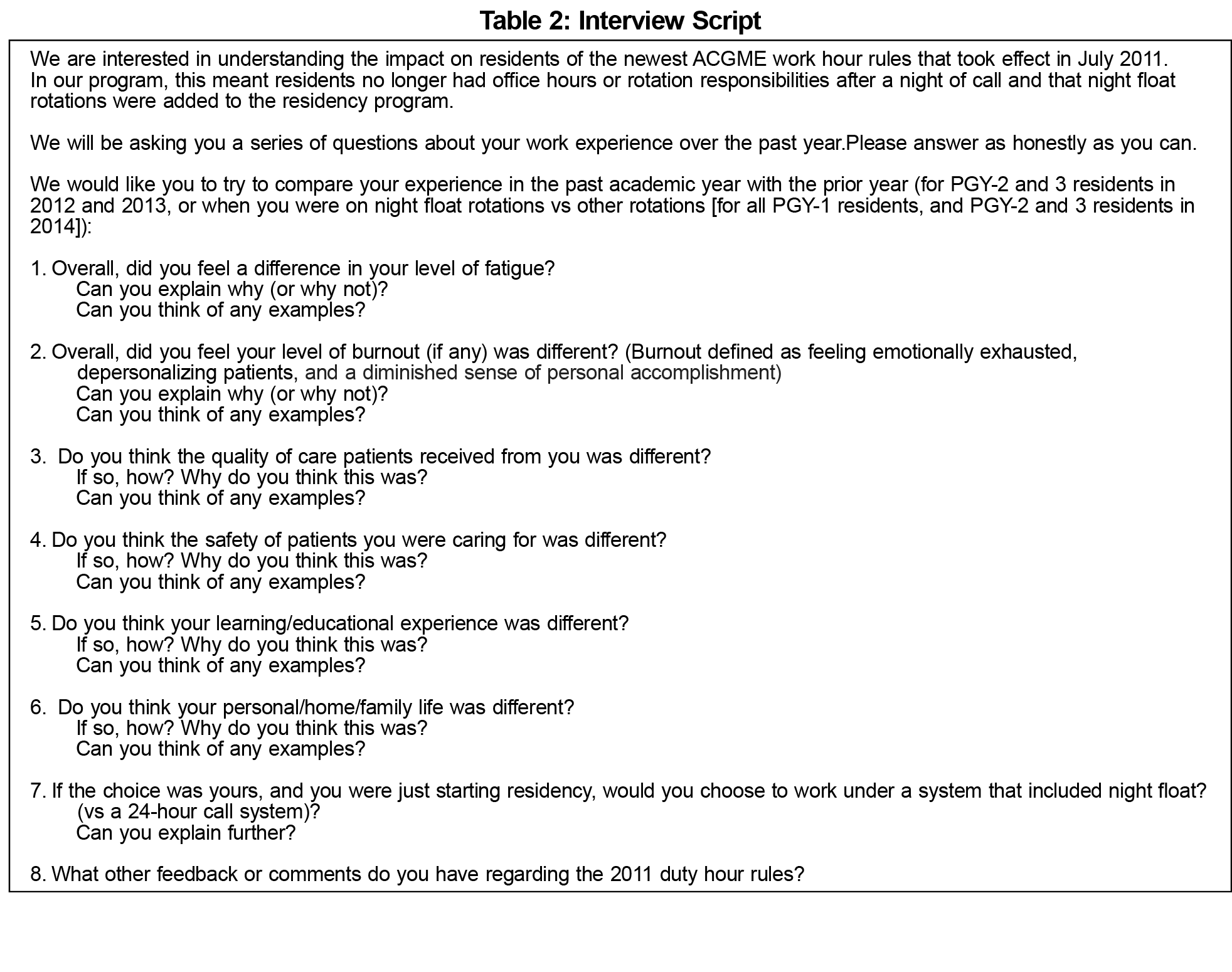 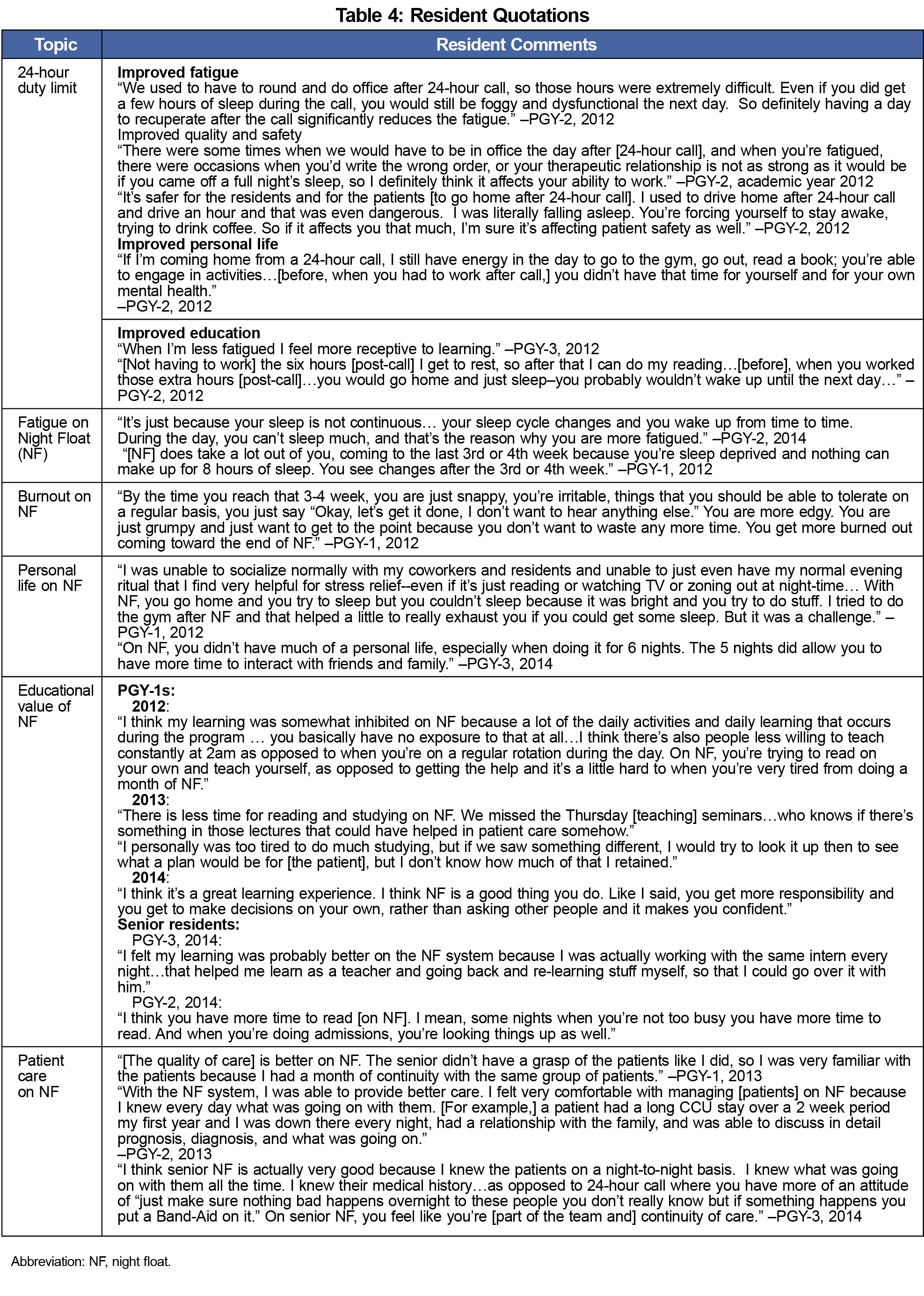 All senior residents in 2012 reported significantly decreased fatigue, saying going home postcall provided essential recovery time for their physical and emotional well-being. Personal lives improved because of more time for family/friends, sleep, exercise, chores, and relaxation. Residents who expressed feelings of burnout felt these lessened due to less fatigue and more time away from work.

Most residents also felt patient care improved because being better-rested made them less irritable and better able to focus, listen, and establish rapport with patients, and less prone to making mistakes. Some reported spending more time with patients on call rather than trying to maximize their own sleep time. Residents also felt the decrease in fatigue created a better educational experience, with more time and energy to study and enhanced receptivity to learning. Some mentioned a slight decrease in clinical experience but felt the benefits more than compensated.

Residents who experienced 4-8 weeks of NF in a year reported more fatigue on NF due to difficulty shifting sleep schedules, lack of sunlight exposure, long shifts, and less social interaction. Fatigue was cumulative, really hitting by the third week; many residents suggested limiting NF to 2 weeks. All residents who experienced both 5- and 6-nights/week NF noted less fatigue with 5 nights/week. Reasons for NF fatigue remained constant throughout the 3 years among PGY-1 and PGY-2 residents. Most PGY-3 residents on 2-week NF did not feel a difference in fatigue compared with other rotations.

Most residents experiencing 6-8 weeks of NF in a year felt more burnout on NF, mainly due to fatigue and social isolation. Being too tired to interact with others even on time off increased social isolation, which in turn worsened fatigue. Residents described fewer colleagues or staff to interact with on nights and feeling excluded from the larger residency group. Fatigue, irritability, and being on different schedules from others negatively affected personal relationships and self-care. Most residents experiencing only 4 weeks (PGY-2) or 2 weeks (PGY-3) of NF in a year felt no difference in burnout on NF vs non-NF rotations.

Most PGY-1 residents in 2012 felt NF negatively affected education because fatigue interfered with reading and receptivity to learning, and there were fewer attending physician interactions. Benefits of independent decision-making, senior resident teaching, and unique nighttime clinical scenarios were mentioned by only one resident in 2012, but became common themes in 2013 and 2014 among PGY-1s. They increasingly reported that NF experiential learning developed clinical reasoning and independence. Senior residents on NF shared this more positive perspective, citing fatigue as interfering with learning less often, and noting the educational value of teaching junior residents. Only a few residents lamented missing daytime lectures; senior residents believed missed didactics had minimal impact.

Resident reaction to curricular restructuring triggered by 2011 ACGME work hour regulations is one measure of the rules’ effectiveness. Reactions of residents in our study working under 2003 and 2011 rules confirm others’ findings of improved resident well-being with 2011 limits. Our residents experiencing both sets of rules expressed more positive perceptions of the 2011 rules’ impact on education and patient care than found in many other studies. This may reflect effects of greater fatigue reduction as a result of abolishing postcall office hours in a family medicine residency compared with more inpatient-focused specialties.

While 2017 rules allowing interns to work 24-hour shifts may decrease the necessity of NF, likely many residencies will continue to use this option. Our findings suggest NF should ideally be limited to 5 nights/week, 2 weeks in duration and 4 weeks total per academic year to minimize negative effects on resident well-being. The theme of social isolation on NF highlights a need to increase social supports during NF rotations.

Our residents’ negative opinions about the educational impact of NF in 2012 were consistent with the literature, but an evolution toward more positive views over the following 2 years has not previously been reported. This finding may relate to changing NF from 6 to 5 nights/week, and introducing some shorter NF and senior NF (pairing a consistent senior and PGY-1 resident). It is also possible residents in the latter part of the study may have viewed the NF learning experience more positively simply because it was their only opportunity to experience the unique nocturnal clinical scenarios and independence previously available with traditional call.

Improved inpatient continuity on NF emerged as a strong theme in our study. The idea of a night resident team more familiar and actively engaged with patients in a manner that positively affects patient care is a benefit of NF that study investigators did not anticipate.

Our study is limited by having been conducted in a single family medicine residency and is only a report of residents’ perceptions, with no objective outcome measures. Interviewers were clinical faculty at the residency, which may have influenced resident responses; however, residents were reassured that participation was voluntary, having no impact on academic standing, and responses would be kept confidential and anonymous during transcription.

This 3-year study of residents’ reactions to the 2011 ACGME work hour rules suggests the rules improved resident quality of life, except on NF, without negatively impacting education or patient care. Negative effects of NF rotations may be mitigated by limiting them to 5 nights/week for 2 consecutive weeks, and 4 weeks total in an academic year.

The authors acknowledge the JFK Family Medicine residents who participated in this study (classes of 2012, 2013, 2014) and Rebecca Van Ness for her assistance in manuscript preparation.