Introduction: Comprehensive medical care should embody the biopsychosocial care model and encompass all aspects of health. Sexual health topics may be overlooked or avoided because of patient and provider discomfort. Our purpose was to better understand patients’ preferences about discussing sexual concerns in primary care. We hypothesized that most individuals have sexual concerns, but many barriers prevent them from seeking care.

Method: We surveyed patients at a family medicine residency program office. The survey explored whether patients had experienced sexual concerns, preferences for addressing concerns in the office, and barriers and facilitators to addressing concerns. Results were analyzed using counts and proportions. Pearson correlations, Pearson 𝜒2 analyses, and independent samples t-tests were used to explore demographic differences in responses.

Conclusions: The majority of patients prefer active inquiry about sexual health concerns from primary care physicians. However, because a large minority prefer not to be asked about sexual health, physicians should inquire sensitively, particularly with older patients. Continuity of patient-physician relationship and allowing patients to choose their provider based on gender may also help facilitate these discussions.

Comprehensive sexual health, including physical, mental, and social aspects of sexual health, is frequently overlooked in primary care physician offices.1-5 Most providers limit discussion to addressing contraception, sexually transmitted infections (STIs), or a specific concern raised by the patient.5-6  Sociocultural taboos related to sexuality contribute to the hidden epidemic of STIs in the United States.7 A survey done in the late 1990s showed that 71% of patients 25 years and older felt a doctor would dismiss their sexual concern if they brought one up.8 Many providers also believe older individuals are not interested in sexual health,6,9 and the majority do not view themselves as adequately trained to comprehensively address sexual concerns.5 However, with the notable exception of studies of gay and lesbian patients,9 few studies have focused on actual patient perceptions of the barriers to discussing sexual health.

We surveyed older adolescent and adult patients at a family medicine residency program health center in fall of 2016. The health center is located in a town of less than 10,000 people. We were not able to identify an existing validated instrument that met our needs, and thus developed a new survey. The survey was constructed with the input of several residents and faculty, including a social worker, and written for a low health literacy population. The 14-item survey included Likert scale, multiple choice, and free response questions. Because the only health center providers are physicians and resident physicians, the questionnaire inquired about physicians rather than providers.

Data were analyzed using counts and proportions. Pearson correlations, Pearson 𝜒2 analyses, and independent samples t-tests were used to explore demographic differences in responses.  Because of the small sample size, some response categories were collapsed before analysis.

Seventy-nine patients returned usable questionnaires. Because of inconsistencies in staff documentation, an accurate response rate could not be calculated. Demographics are listed in Table 1. Participants were comparable in age to the general adult population of the health center (median age 47), but women were over-represented (69% vs 55%, P=0.01). The majority of participants were women, straight, and in relationships. The majority had experienced a sexual concern, and most of these had discussed the concern with their primary care physician. Having or discussing a sexual concern was neither correlated to age nor associated with gender. Those in relationships were more likely to report having had a sexual concern (P=0.048) and discussing this concern with a primary care physician (P=0.020). 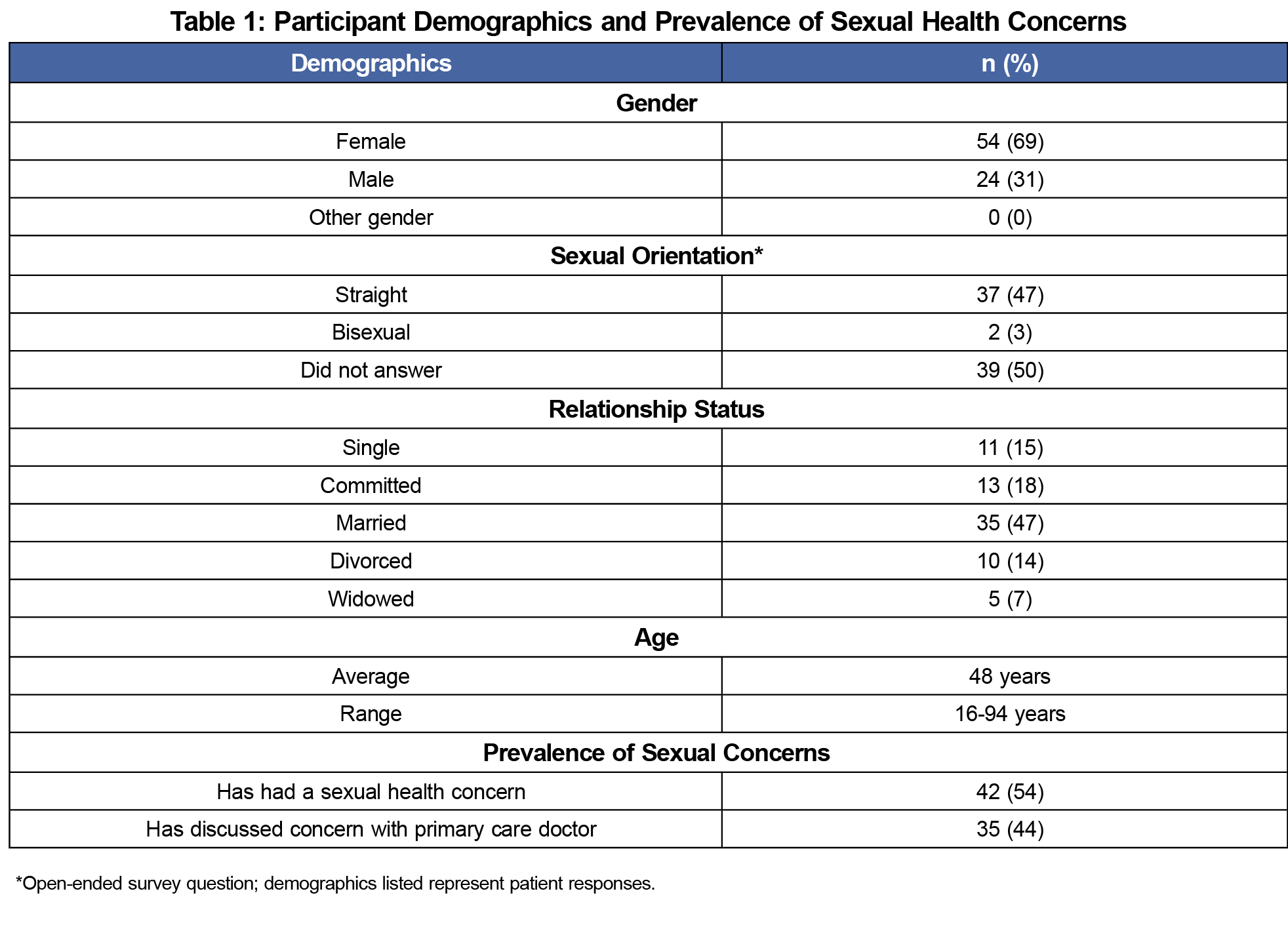 “Embarrassment” (46, 59%) and “nervousness” (26, 33%) were the most common barriers to discussing sexual concerns, followed by “concern about keeping information private” (14, 18%; Figure 1). Younger patients were more likely to identify “embarrassment” and “concern about discrimination or being treated badly” as barriers (P=0.001 and P<0.001, respectively). There were no significant differences in response by gender. 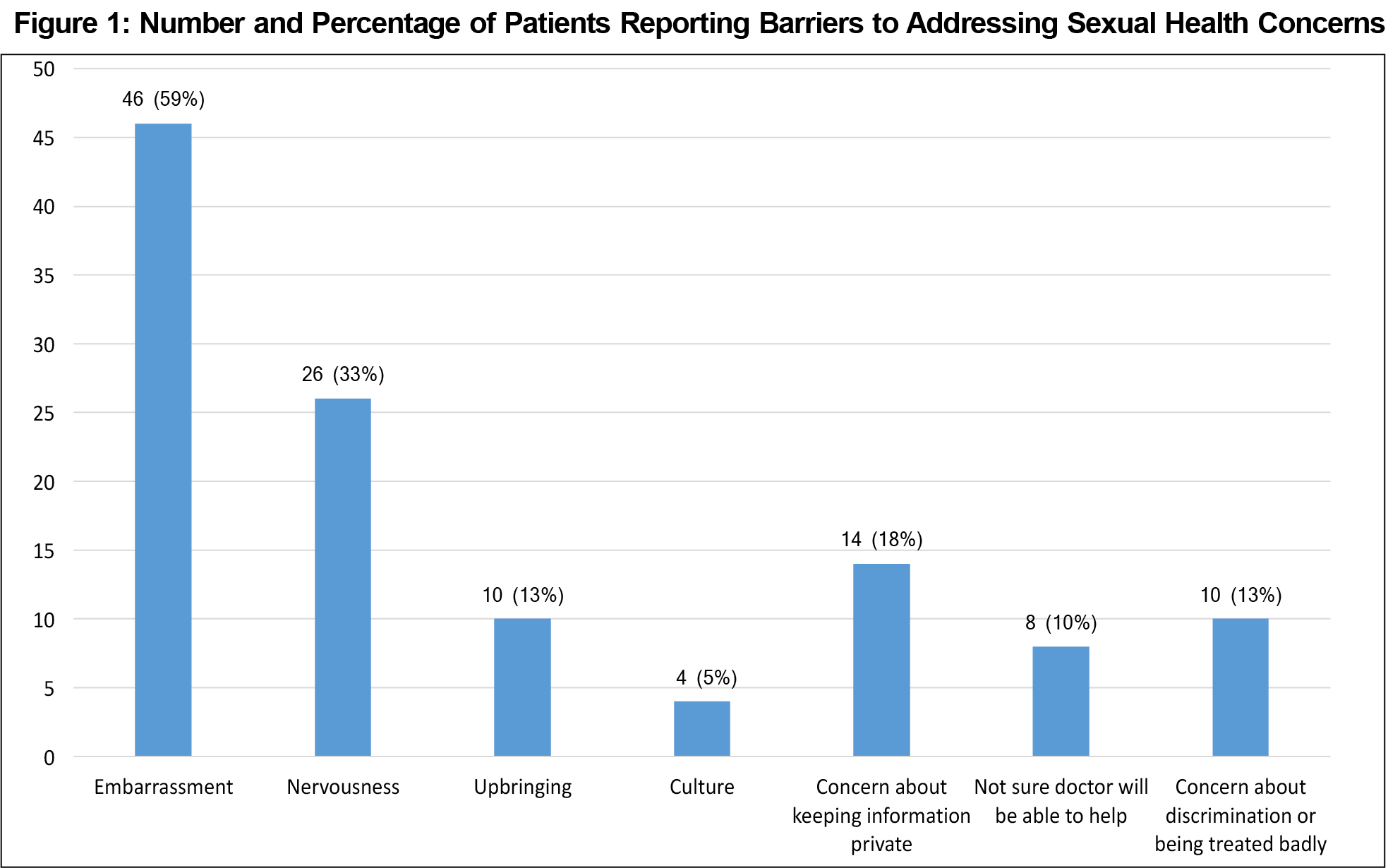 Patients most often indicated that having met the physician previously (47, 59%), physician initiating the conversation (34, 43%), and having a physician of the same gender (33, 42%) made discussion of sexual concerns easier. Younger patients were more likely to indicate that writing their concern on a medical history form would make discussions easier (P=0.022; Figure 2). Women were more likely to indicate that discussion was easier with a same-gender physician (P=0.003) or a physician they had met previously (P=0.013).

Although we solicited free-text responses about barriers and facilitators of discussion, very few patients responded. Therefore, meaningful analyses could not be conducted. 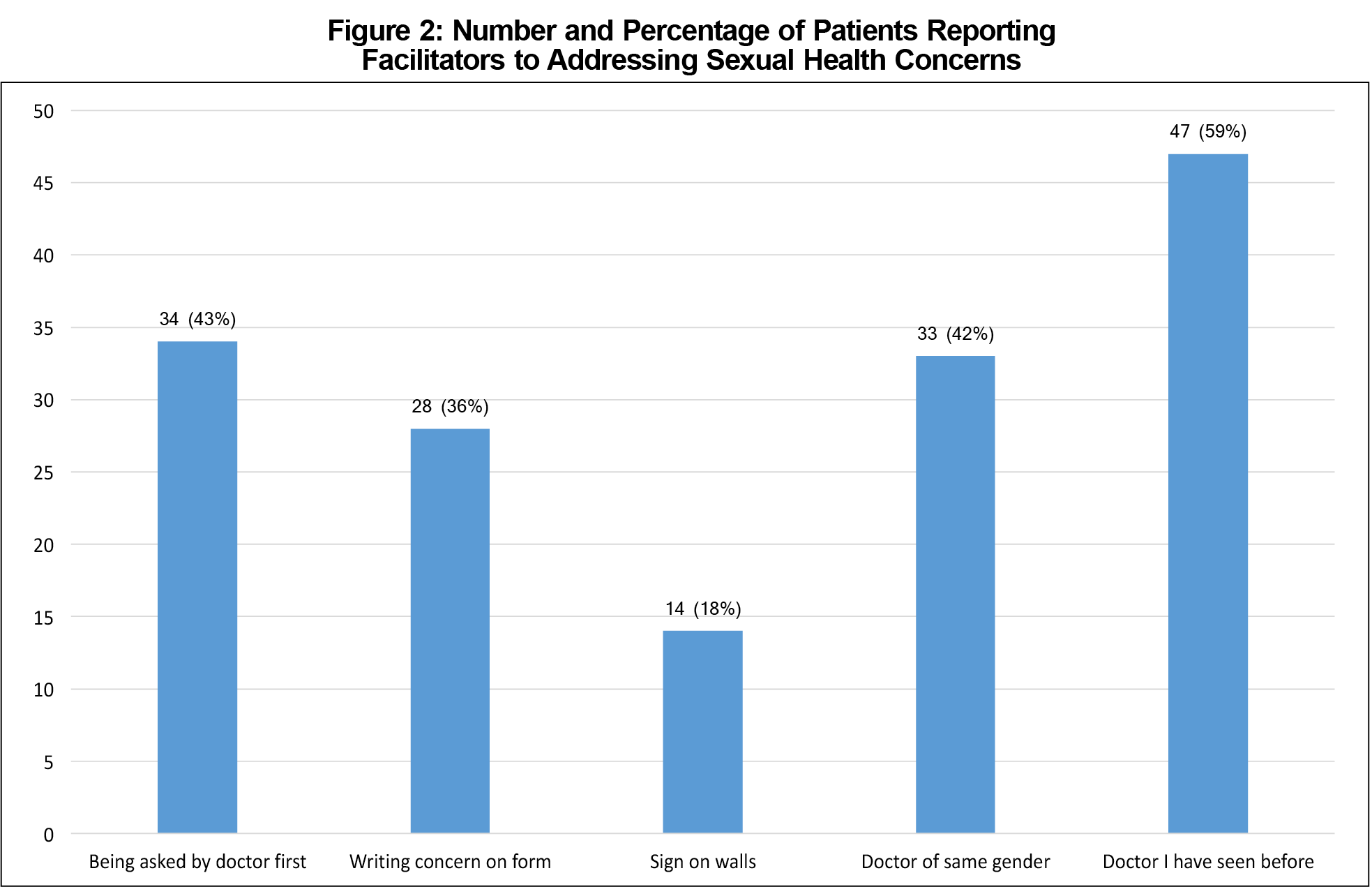 Sex is an important part of health and quality of life. Our results affirm that many primary care patients, regardless of age or gender, have experienced sexual concerns. A majority of patients prefer that physicians initiate discussions of sexual health and that offices screen for sexual concerns by asking about them on intake forms. However, a substantial minority of patients did not want physicians to ask about sexual health, suggesting that these conversations should be handled with sensitivity. In our practice, these patients were more likely to be older.

Our study also indicated that offices may assist patients in the process of addressing sexual health concerns by supporting patient-provider continuity. Patients, particularly women, also indicated more comfort discussing sexual concerns with physicians of the same gender. Although allowing patients to choose providers may not always be possible, practices should be aware of this barrier to discussion, and consider exploring it with patients as they choose providers, whether for an ongoing relationship or an urgent concern. Physicians may also benefit from being cognizant of gender disparities when addressing sexual concerns with patients.

This study has important limitations. The sample size was small, and response rate could not be calculated, limiting generalizability. Women were over-represented in the study. The survey tool was not formally validated. Half of participants (39) did not answer the sexual orientation question. This may be because of the question’s placement on the page, but could also be due to participant confidentiality concerns. Although the survey was anonymous, surveys were collected by office staff. Nearly all responding survey participants identified as heterosexual, which meant that the perspectives of LGBTQ patients could not be captured. The sample was distributed at only one medical site in the community, a small town in the United States with a Caucasian majority. The study sample itself was also predominantly female, heterosexual, and in a committed relationship. Findings may not be generalizable to other populations. It would be useful to conduct larger studies among more diverse populations in order to better capture diverse patient perspectives.

This study was presented at the Michigan Family Medicine Research Day, May 25, 2017, Howell, Michigan.