Smartphone Use and Professional Communication Among Medical Residents in Primary Care

Introduction: The rapid integration and evolution of technology has impacted remote data access, dissemination of medical information, and use of applications (apps) for patient care and treatment. The aims of this study were to (1) describe patterns of smartphone use by residents in a rural clinical setting (both clinical and communicative patterns), (2) examine residents’ perceptions of benefits of smartphone use, and (3) determine whether there is an association between smartphone use and organizational attributes.

Results: Descriptive analyses indicated that primary care residents used their pagers more often for communication, but also believed smartphones were more efficient, and increased accessibility and timeliness of attending physicians. Additional analyses suggested that smartphone use was not associated with chaos, and was negatively correlated with history of culture change within the organization.

Conclusion: Overall, use of smartphones among medical residents is relatively common, and residents believe there are numerous benefits of use. Future research might consider causal reasons why there is reduced communication among primary care practices with a history of change.

The landscape of medical training has shifted with technological advances over the past 2 decades. The rapid integration and evolution of technology has impacted remote data access, dissemination of medical information, and use of applications (apps) for patient care and treatment. Previous research has described the use of smartphone apps among providers in Accreditation Council for Graduate Medical Education training programs and/or the impact of social media use.1–4 Most often, studies examine how providers use smartphones or mobile devices for self-directed training, to access medical information, and/or answer clinical questions.2,5–7 Studies have not examined how primary care residents utilize smartphones for professional communication (eg, communication with staff and/or attending physicians), attitudes toward smartphones, and associations with organizational characteristics.

Participants included 39 PGY-1-3 family medicine and internal medicine medical residents, 18 years or older (Mage=30.1, SD=2.7) training at a rural Pennsylvania teaching hospital. The sample was 53.8% male, and completion rates were evenly distributed among PGY-1, 2, and 3 residents. Residents predominantly identified as Asian and white (46.2% and 43.6%, respectively). Analyses indicated that family medicine and internal medicine residents significantly differed according to race/ethnicity, with a greater representation of white residents in family medicine, and Asian residents in internal medicine. Residents were surveyed anonymously, and the protocol was approved by the Institutional Review Board of the Guthrie Clinic.

A brief measure was developed to assess residents’ professional use of smartphones and pagers. This measure was adapted from other studies examining app usage among medical residents.1,4 Smartphones were defined as mobile phones with text and verbal communication abilities that also contained most functions of a computer, including an internet connection. All residents were issued a one-way pager by their residency programs. These electronic devices allow residents to receive text messages while on duty and send text messages to peers and attendings via the health organization’s intranet site.

Professional communication was defined as any sort of communication or contact with a colleague, peer, or other staff member within the organization for work-related or professional reasons. This definition was emphasized verbally during administration of the survey, and several times within the questionnaire, to avoid confusion with personal use (eg, calling a friend, worker, or family member for social reasons). Eight questions asked about specific usage (frequency and type of use). Residents completed an additional eight questions (α=.7) assessing their beliefs about smartphones using a 7-point Likert scale ranging from 1 (strongly disagree) to 7 (strongly agree). Residents indicated their agreement or disagreements with statements like, “Using my smartphone increases my efficiency,” or “Using smartphones to communicate has strengthened my relationship with coworkers and other physicians.”

Residents completed two measures to examine organizational practice and functioning. The Survey of Organizational Attributes of Primary Care (SOAPC)8 (α=.7), was designed to assess a primary care practice’s resources for change. This 21-item measure is comprised of four factors including communication, decision-making, stress/chaos, and history of change. Items are measured using a 5-point Likert scale ranging from 1 (strongly disagree) to 5 (strongly agree). The first three subscales capture internal resources for change, while the fourth subscale (history of change) is a measure of perceived change.

The communication subscale measures the team’s ability to work through challenges via consultation and discussion, with higher scores indicative of better communication. Questions from the decision-making subscale assess collaborative decision-making, and the degree to which leadership encourages member input. The higher the score on the stress/chaos subscale, the greater the likelihood that members of the team feel overwhelmed by workload demands. Finally, higher scores on the history of change subscale indicate a greater perception of change within the culture of the organization and/or management of the practice. This subscale required that residents agree or disagree with statements like, “Our practice has changed how it takes initiative to improve patient care,” and “Our practice has changed how everyone relates.” Statements from this scale do not indicate the degree to which beneficial change has occurred, but simply assess whether perceived change has occurred.

One question assessed perception of pace within the clinic (ie, “How would you rate the pace at the clinic you work in?”) from 1 (calm) to 5 (chaotic), and an additional question assessed reciprocal sharing behavior (eg, “You keep to yourself and do your own thing versus pitch-in to help others and they pitch in to help you”) of work responsibilities (1=never to 5=often).

Patterns of Smartphone Use

Descriptive analyses were conducted to identify patterns of smartphone use among residents. There were no significant differences between family medicine and internal medicine residents on variables related to usage, thus results reported examine both groups.

Regarding communication with staff, the majority of residents indicated that they used their smartphones to communicate with other residents (97.4%) or the attending physician (76.9%). They were less likely to endorse contacting other physicians, support staff, or nurses via smartphone (18.0%, 5.1%, and 5.1%, respectively). 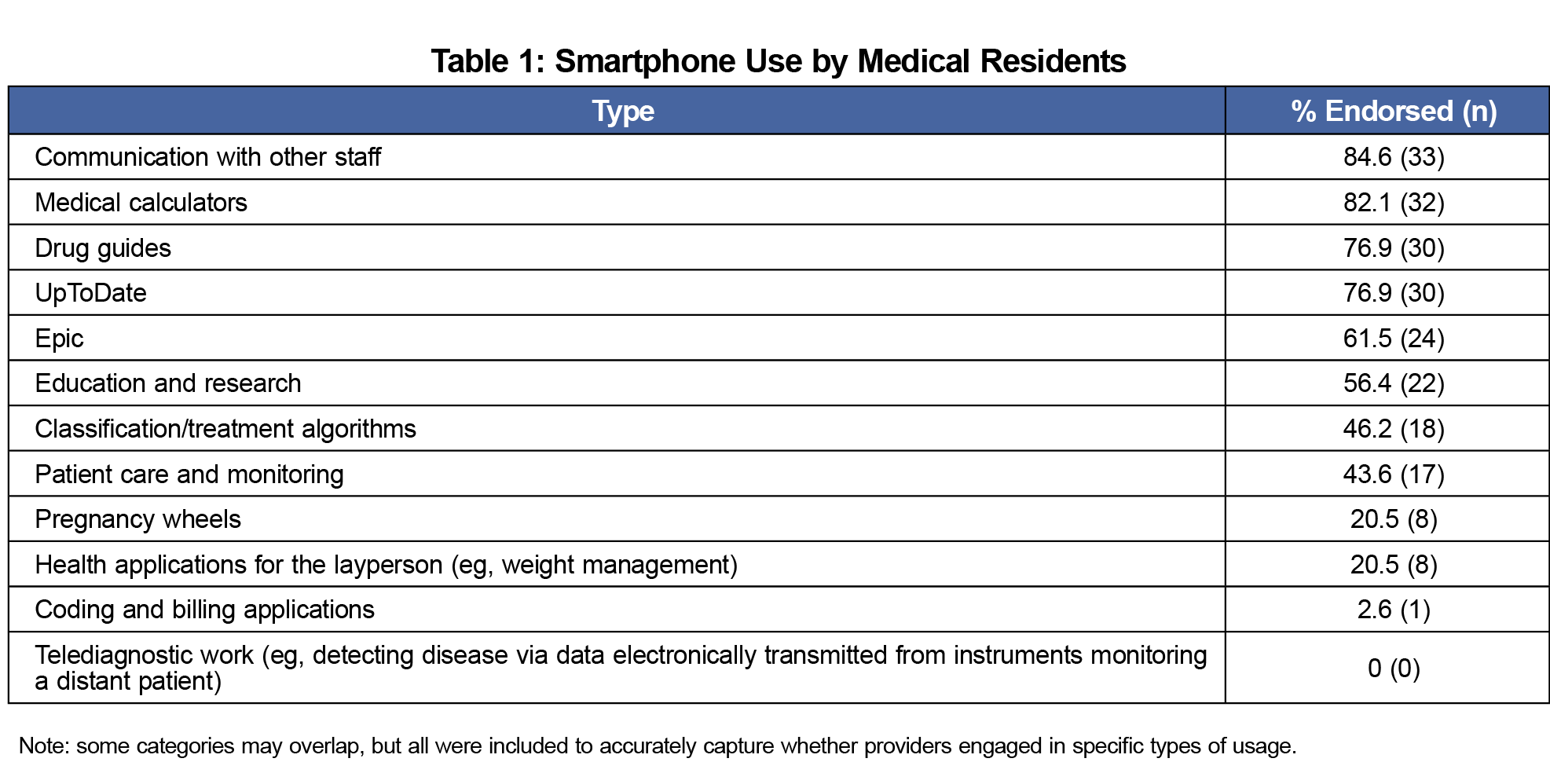 Perceived Benefits of Smartphone Use

Finally, residents did not believe that use of smartphones resulted in difficulties or benefits for professional boundary setting (M=4.2, SD=1.5), and the majority of residents (75.0%) believed that there was no impact of smartphone use on their interpersonal relationships with patients.

Smartphone Use and Organizational Characteristics

Bivariate correlation analyses were conducted to examine associations between quantity of cell phone use and scores on the Survey of Organizational Attributes. There was no association between percentage of time using smartphones and communication, decision-making, and stress/chaos. However, history of change was negatively associated with smartphone use (r=-.3, P=.04). There was no significant association between smartphone use and reciprocal sharing of responsibilities.

Despite the consensus that smartphones are beneficial, residents were relatively polarized on the issue of whether smartphones should completely replace pagers. Nearly a quarter of the residents surveyed felt strongly that smartphones should replace pagers, yet another quarter of the residents strongly disagreed. Consequently, if the organization removed the use of one-way pagers there may be a significant portion of residents who are strongly dissatisfied with the change even though others would likely welcome it. This finding suggests that practices may need to carefully consider any changes to the fundamental elements of staff communication despite the positive perception of newer technologies.

Furthermore, exploratory analyses revealed that smartphone use was not correlated with the communication subscale of the SOAPC, which emphasizes constructive forms of communication and effective problem solving among a team. However, smartphone use was negatively correlated with the history of change subscale, which measures perceived changes within the management and/or culture of the practice. This suggests that one factor motivating greater smartphone use in the workplace among medical residents may be a perception that the practice has not endeavored to change how it does business, improves patient care, or facilitates staff interaction. Some residents may be taking change into their own hands by utilizing a personal device to operate more efficiently at work. Conversely, practices that are perceived as experiencing greater change may reduce the need for providers to use a personal smartphone for completing work-related tasks.

However, the history of change subscale of the SOAPC does not make it distinctly clear whether perceived changes have resulted in positive or negative outcomes for the practice. In fact, previous research has suggested that increased change within work management and culture may be associated with reduced staff communication.8 It may also be the case that residents who perceive greater change within the practice are less likely to use an informal method of communication, such as their personal smartphone, to reach out to other staff members.

Among today’s medical residents, smartphones appear to be an important mechanism for communicating and accessing information. Therefore, future research might seek to replicate the present study’s findings and consider causal reasons for reduced smartphone use among primary care practices with a history of change. Research that distinguishes between positive versus negative forms of change within the culture of a medical practice and their impact on staff communication may benefit primary care practices in a world that is increasingly driven by smartphone technology.