Introduction: Exposure to adverse childhood experiences (ACEs) has been associated with poor health in adulthood. Primary care providers can provide more appropriate medical care and intervene if they ask patients about ACEs. The purpose of this study is to determine existing knowledge and attitudes about ACEs among family medicine residents within the Washington, Wyoming, Alaska, Montana, and Idaho (WWAMI) region.

Results: Most residents reported they had some (32%) or moderate (35%) knowledge of the ACEs study. However, 30% reported no knowledge of the ACEs study, and very few (3%) reported significant knowledge. Of 117 respondents reporting at least some prior knowledge of ACEs, 42% had first heard about ACEs during residency. The ACEs topics that respondents felt least comfortable addressing during a patient encounter were a patient’s personal history of sexual abuse (75%) and witnessing physical abuse (47%). Most residents (84%) indicated that they would like to see ACEs integrated into their residency curriculum.

Discussion: This study demonstrates a gap in residency training on the topic of ACEs in family medicine residencies within the WWAMI region. Residents are uncomfortable addressing ACEs with patients but are receptive to learning about this topic. More teaching about ACEs can increase residents’ comfort level with addressing these topics in the primary care setting.

Adverse childhood experiences (ACEs), including childhood exposure to verbal, physical, or sexual abuse, domestic violence, and caregiver mental illness, substance use or imprisonment, have been associated with poor health in adulthood.1-3 Individuals who are exposed to four or more ACEs have significantly increased risk of alcohol use disorder, substance use disorder, depression, suicidality, sexually transmitted infections, ischemic heart disease, cancer, and chronic lung and liver disease later in life, sometimes even decades after the experience occurred.1-3 Primary care providers do not routinely ask about exposure to trauma and abuse even though patients think providers can help address these issues.4-7 By asking about trauma and abuse, primary care providers have an opportunity to provide trauma-informed patient care—more sensitive and appropriate care to survivors.5,8,9

One possible step to increase the number of providers who screen patients for ACEs is to include training in educational settings. In the past few years, curricula on ACEs have been developed in nursing, medical school, residencies, and other health sciences.10-13 By gaining knowledge of ACEs and understanding the association with chronic medical conditions, residents can better achieve the patient care milestones set out by the Accreditation Council for Graduate Medical Education, which require understanding of the interplay between psychosocial factors and illness.14

A study by Tink, et al looked at resident knowledge of ACEs in one family medicine program in Canada.6 They found that only 2% of residents screened patients for ACEs, and 65% of residents were uncomfortable screening for ACEs. Only five out of 115 residents recalled receiving training about ACEs during residency. While this study provides information about a single residency training program in Canada, little is known about what training exists more broadly. Our study aimed to identify existing knowledge and attitudes about ACEs among family medicine residents within the Washington, Wyoming, Alaska, Montana, and Idaho (WWAMI) region.

A nine-question survey was developed to assess family medicine residents’ knowledge and attitudes about ACEs, as well as their comfort level in addressing ACEs during patient encounters (Appendix Figure 1). A link to the survey was sent out via email in March 2017 to 540 family medicine residents in their first through third postgraduate years in the WWAMI Network, which is comprised of 22 family medicine residency programs. Additional notices to complete the survey were sent out in April and June 2017. The survey was anonymous and no compensation was offered for completing it. The residency program faculty at each program were not made aware of how many of their residents completed the survey, thus decreasing the risk of coercion or faculty pressure to complete the study or answer in a particular way. We used descriptive statistics to describe the survey data. The institutional review board at the University of Washington reviewed this study and determined that it qualified for exempt status. 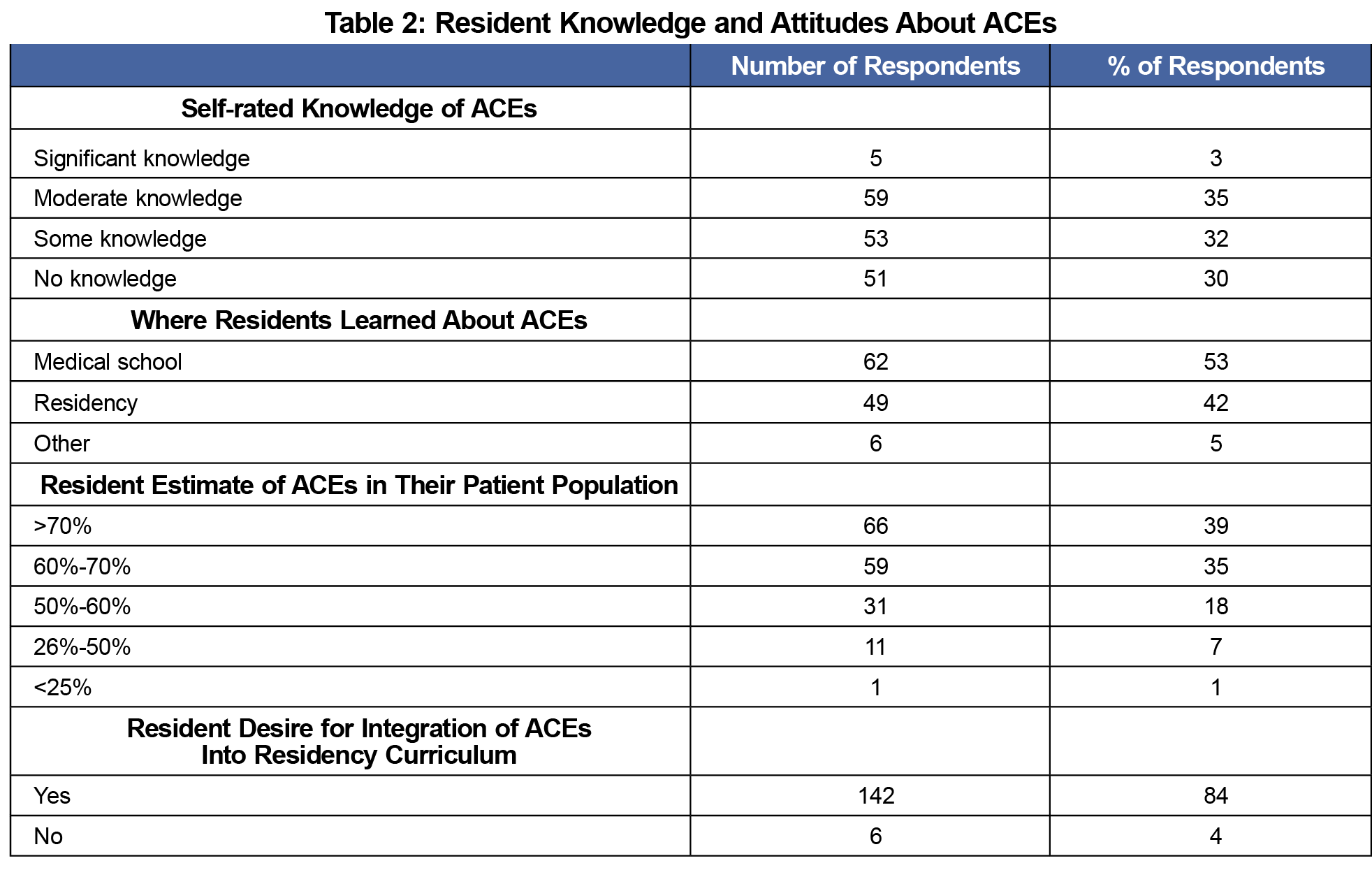 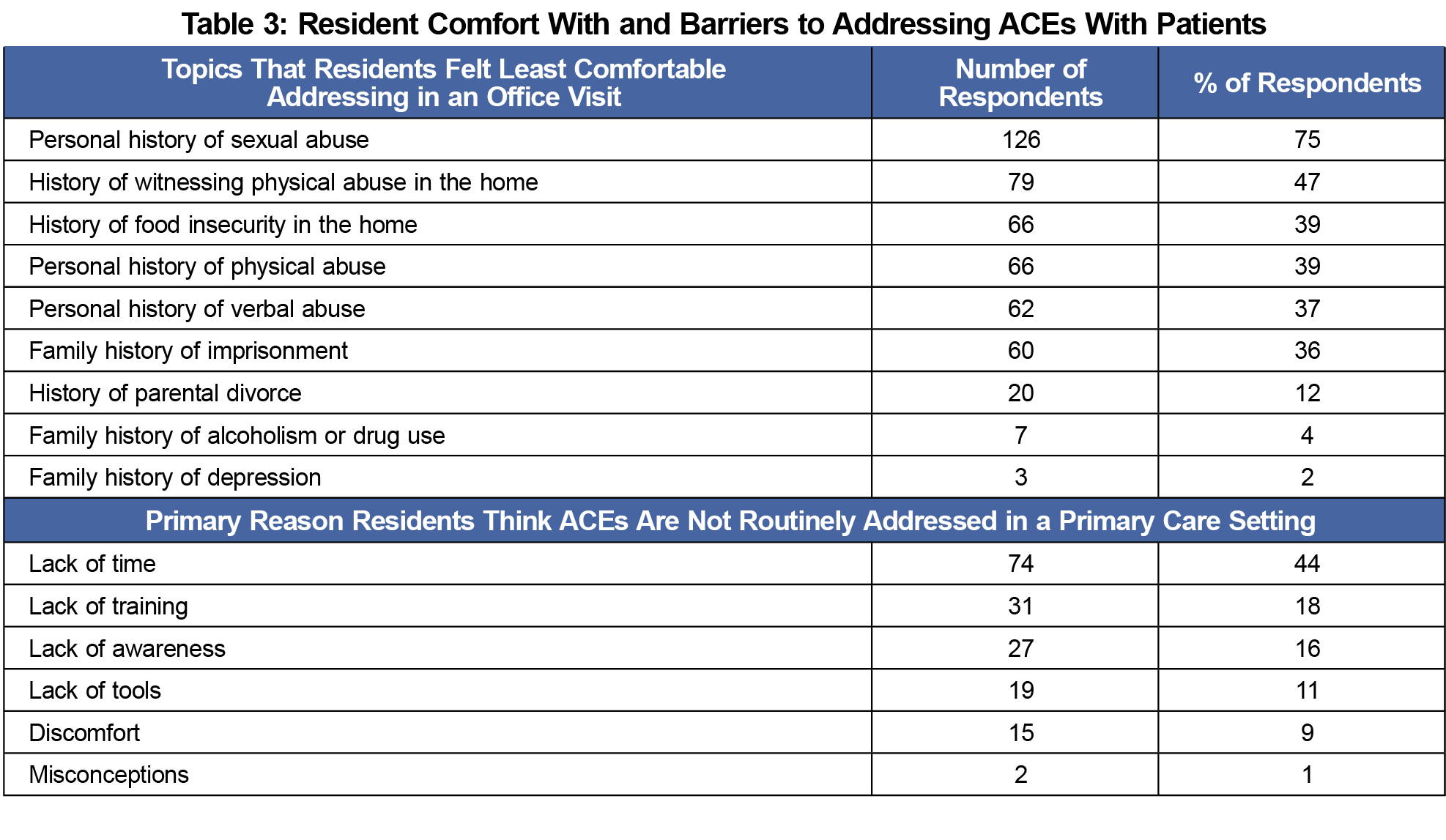 Our study shows that residents in the WWAMI region reported low rates of awareness and learning about ACEs in residency. A lack of time was overwhelmingly reported as the largest barrier to addressing ACEs during patient encounters, with a lack of training, awareness, and tools cited as the next-largest barriers. While time is often a limitation in primary care settings, it is likely that with more adequate training residents will become more skilled and efficient in their ability to address ACEs in shorter time frames.

Our study results are limited by the response rate of 30% and the fact that our study results are from a nonvalidated, self-reported survey rather than observational data, and residents may over- or underestimate their knowledge about ACEs. The residents surveyed were undergoing training in a specific geographic area and the knowledge and attitudes about ACEs of residents in this region may not be generalizable to other regions of the United States. We also asked about whether residents had knowledge of the ACEs study and some residents may have answered the question differently if we had asked whether they had knowledge of ACEs generally rather than the ACEs study.

This study demonstrates a reported gap in residency training on the topic of ACEs in family medicine residency programs in the WWAMI region. Residents in this study stated they were interested in having ACEs integrated into their residency curriculum. Training in ACEs can increase clinicians’ comfort in asking about and discussing ACEs with patients and providing better trauma-informed care to patients.11-13 Our study points to specific ACEs that residents feel least comfortable addressing, and therefore it would be important that future curricula focus on addressing these areas in particular: patients’ personal history of sexual abuse, and history of witnessing physical abuse in the home.

Presentations: Preliminary results were presented at the Society of Teachers of Family Medicine Annual Spring Conference in Washington, DC in May 2018.