Methods: From October 2, 2017 to July 12, 2019, third-year medical students at a private, urban medical school were asked to complete an assessment survey during their family medicine clerkship orientation. The anonymous survey assessed students’ self-perceived knowledge and attitudes regarding community medicine and care of vulnerable populations. We examined differences in survey responses by student demographics.

Results: A total of 401 students participated in the survey; 50.5% of respondents agreed that they had knowledge to assess health literacy of the patient, while only 22.2% of students agreed that they had knowledge about how to identify a community and conduct a community health needs assessment. Additionally, students agreed with being most comfortable providing care to adolescents (73.0%) and the elderly (69.5%), and that they were least comfortable caring for incarcerated individuals (31.7%) and immigrants/refugees (44.1%).

Medical providers’ biases, stereotypes, and uncertainty in clinical decision making while caring for vulnerable populations are some of the many contributing factors to health disparities.1 Early education to shape medical trainees’ attitudes regarding underserved populations may inform their future practice. Despite limited literature examining this relationship, studies have shown that attitudes and beliefs play a role in health care delivery. In one study, medical students’ and residents’ endorsements of false beliefs about race-based biological differences resulted in racially biased pain assessment and treatment recommendations.2 Similarly, studies suggest that implicit bias among physicians can affect diabetes care,3 cancer screening and treatment recommendations,4,5 and renal transplantations6,7 for patients of different demographic backgrounds.

Although many students enter medical school with a commitment to underserved communities, this tends to decline over time 8–10 and needs to be reinforced across training. Cross-cultural education on these topics might help medical students counteract the influence of biases that can impact downstream physician performance and health outcomes.11 However, there is no consensus about the best way to deploy this type of training.12–14 To inform the development of a health disparities curriculum, we surveyed third-year medical students’ self-perceived knowledge about community-based medicine and care of vulnerable populations and determined how perceptions differed by demographics.

Our study population consisted of third-year medical students (N=537) completing their family and community medicine clerkship at a private, urban medical school between October 2, 2017 and July 12, 2019. Of the 537 students who received the paper survey, 425 responded and 24 declined/did not respond about consent. The final sample consisted of 401 students (74.7% of those eligible) who fully completed the survey.

All data were inspected for their frequencies, normality, and homogeneity of variance. We completed descriptive analyses using IBM SPSS Statistics version 26 (Armonk NY: IBM Corporation). We examined demographic differences in attitudes and perceived knowledge using independent t tests for gender and race/ethnicity comparisons and one-way analyses of variance for age and community size comparisons. Data were treated as interval in effort not to condense Likert scale categories. For analytic purposes, we collapsed racial/ethnic categories into two groups: non-Hispanic White, and other, due to the small sample sizes in the other groups. 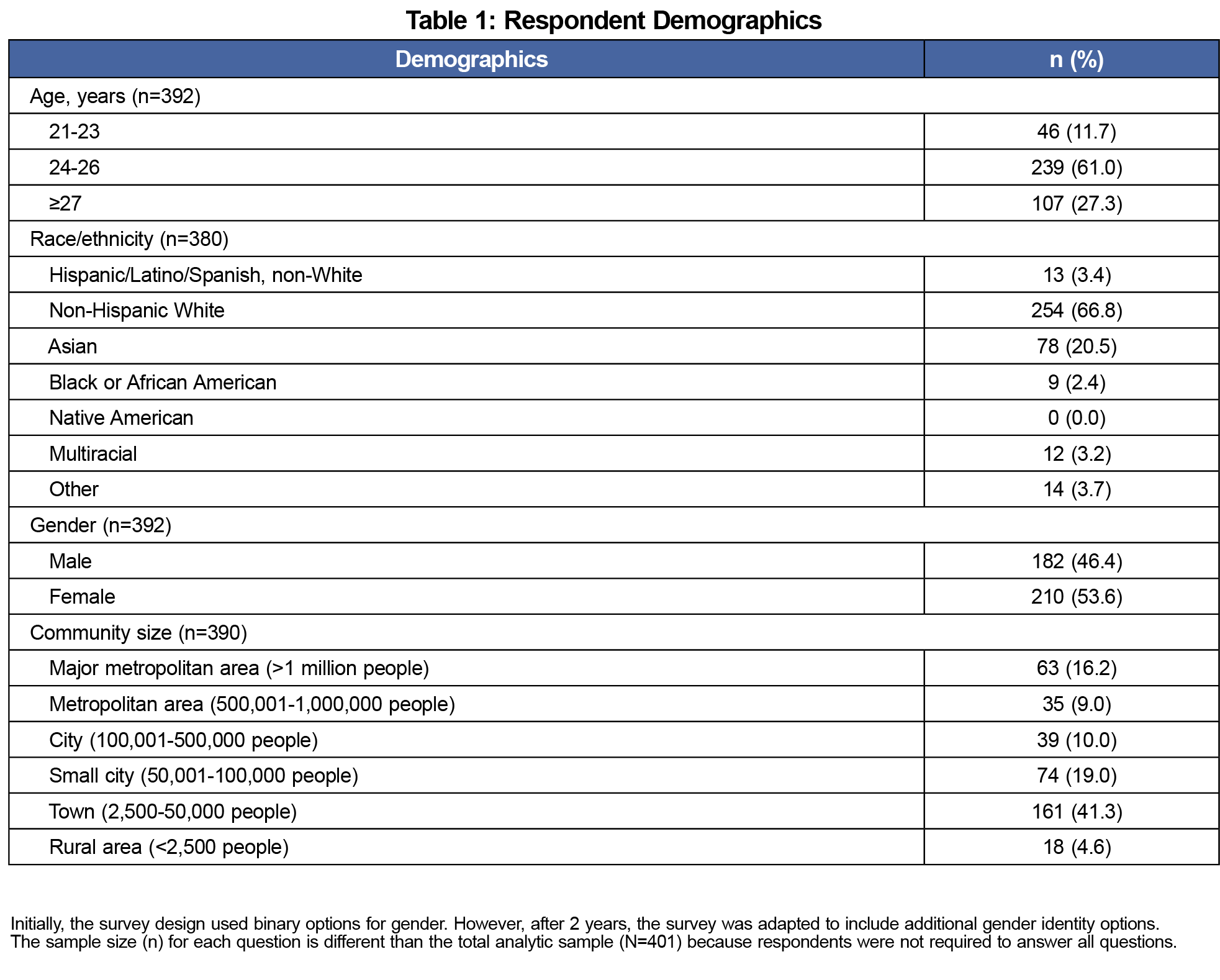 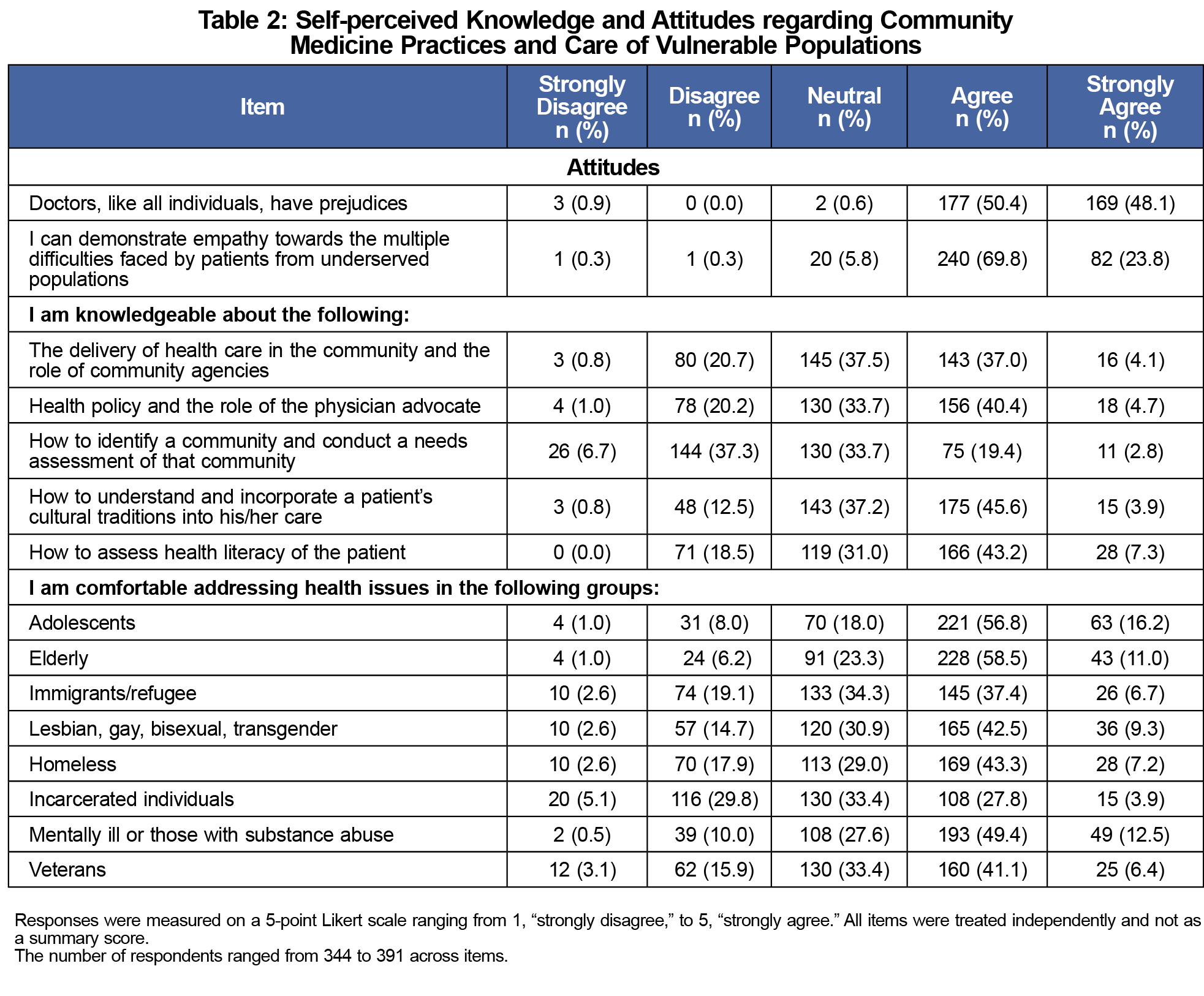 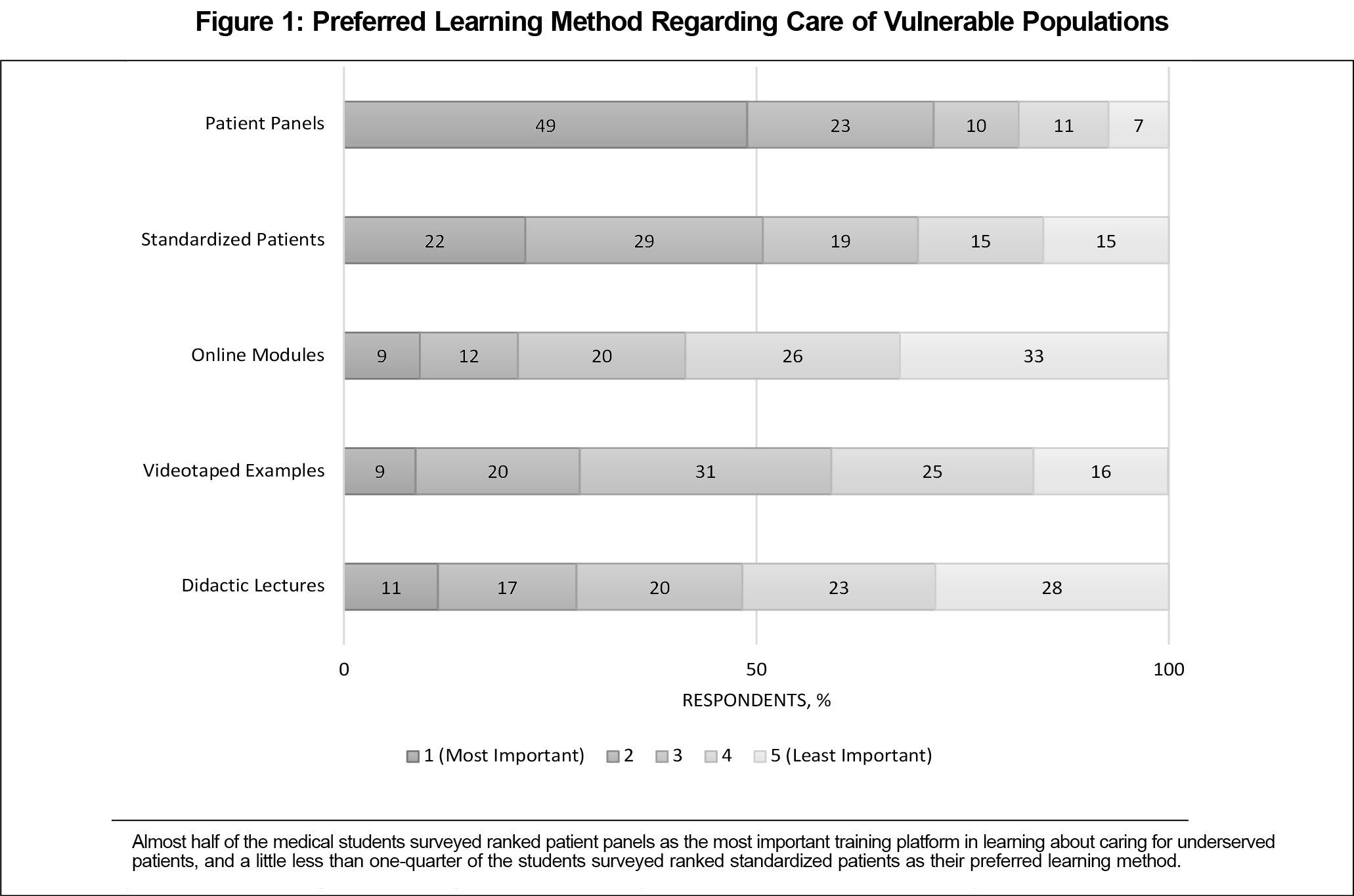 After adjusting the threshold for significance to adjust for multiple comparisons within each subscale (.05/8=.006), there were no gender, age, or community size differences on any items or for the variety of populations with whom they felt comfortable addressing health disparities. The attitudes and knowledge levels reported by students also did not significantly differ by race/ethnicity (Table 3). However, non-Hispanic Whites reported significantly more confidence in addressing health concerns for patients who are LGBT (P=.001), homeless (P<.001), veterans (P<.001), and patients who are mentally ill or those with substance use issues (P<.001) than students from other race/ethnicities. Non-Hispanic White students also reported feeling comfortable working with a greater variety of vulnerable populations compared to other students, (P<.001). 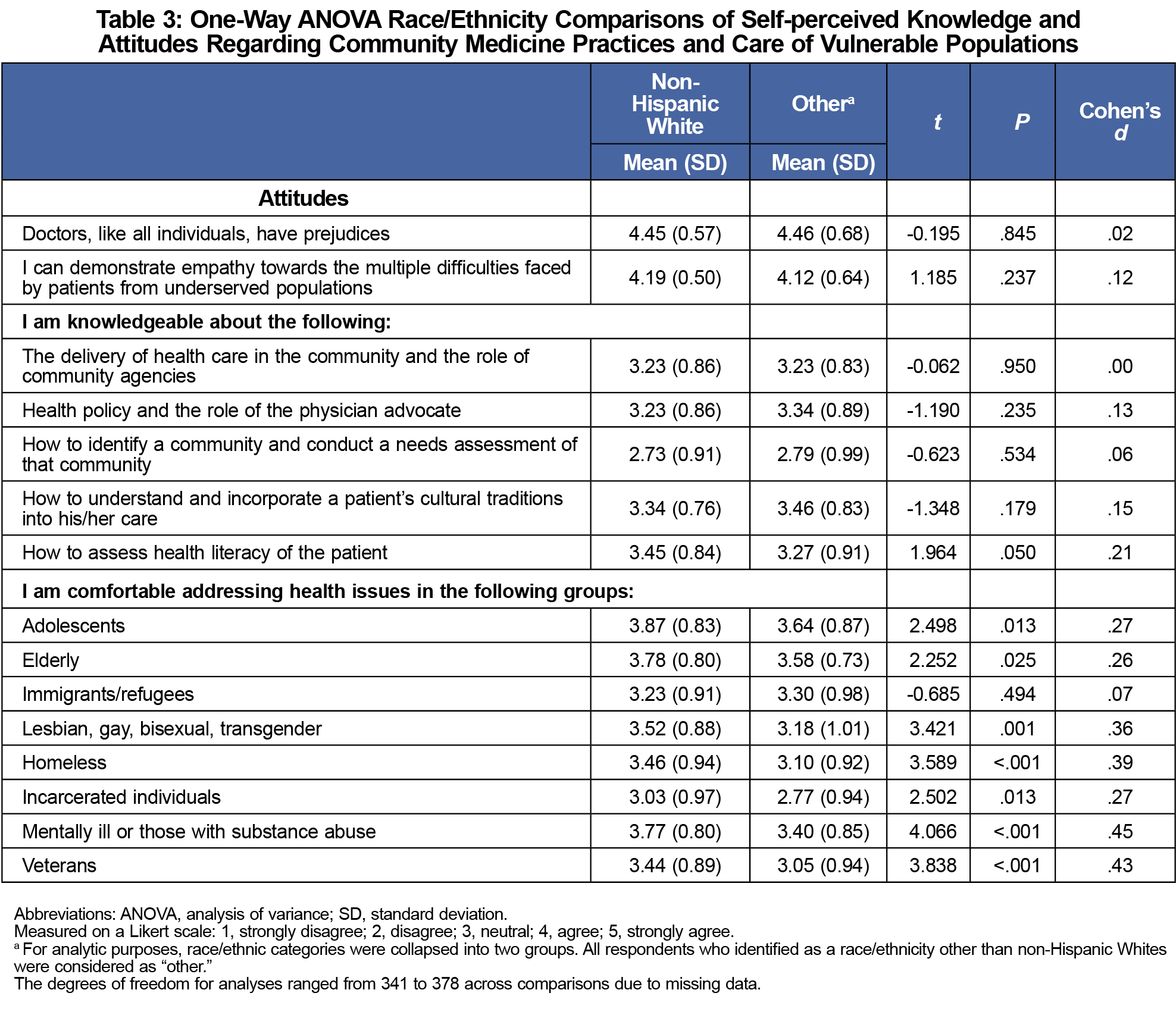 An assessment of medical students’ educational needs is a key component for the development of an adaptive curriculum, providing important first steps to inform more effective educational interventions in the future.16,17 Encouragingly, students in the present study reported feeling highly prepared to be conscientious and empathetic clinicians, though they did note deficits in their skills to evaluate the needs of their communities. In the present study, students reported greater comfort treating certain vulnerable populations, which may reflect groups whom they have been the most exposed to, or have learned the most about in their preclinical education, such as adolescent and elderly populations. Previous studies also noted that community-based clinical experiences with vulnerable populations improved health professional students’ comfort level and future willingness to care for underserved populations.18,19 Thus, learning environments that provide opportunities for student exposure to underserved populations might also help to strengthen medical students’ attitudes and commitment to these groups.19-21 Cumulatively, these findings suggest that potentially effective educational strategies could entail a combination of didactic training and hands-on opportunities to interact with a range of vulnerable populations.

There were few demographic differences in how prepared students felt to be effective clinicians and advocates generally. However, there were some notable self-reported differences in comfort while working with vulnerable populations, though the effect sizes were all small (Cohen’s d<.5). Although there is limited research exploring students’ preparedness to care for different vulnerable populations, similar to our findings, some existing literature suggests that non-Hispanic Whites perceive themselves more prepared to address the health needs of vulnerable populations, such as those who identify as LGBT.22,23 In one study, non-Hispanic Whites reported higher comfort levels with LGBT health compared to respondents in the Asian race/ethnicity group,22 and in another study, non-Hispanic white respondents reported more agreement with the statement “I am able to empathize with the life experience of an LGBT patient” compared to all other respondents.23 It is unclear whether the differences in confidence levels reported by these students reflect a response bias or true differences, and these potential biases should be explored in future studies. Formal training might help all students to feel prepared to address the health needs of vulnerable populations and encourage students to increase their exposure to these populations. We plan to explore this in the future as we develop our curriculum. Assessment tools, such as observed structured clinical examinations or direct observation checklists, could help to evaluate whether the students are able to implement this training in practice.

Our study has limitations. First, we treated Likert-scale data as interval. While this could limit the ability to interpret our findings,24 this approach allows for a more nuanced understanding of students’ self-perceptions and attitudes. Second, our study is limited to surveying students at one point during their family medicine clerkship and it is not possible to evaluate whether our findings could be contingent upon the timing of students’ clerkship assignments, as clerkship order is randomly assigned by the university. Additionally, all students participate in a longitudinal health systems science course including population health and community medicine during their first and second years, and it is possible that this curriculum has influenced students’ comfort levels with vulnerable populations. Third, the majority of our sample was non-Hispanic White between the ages of 24-26 years, which limited demographic comparisons and conclusions. Fourth, we surveyed medical students at a single institution, thus limiting generalizability. Furthermore, we cannot exclude response biases due to the self-reported nature of the survey. Despite maintaining survey anonymity to mitigate the impact of a social desirability bias, it may still be present in the responses.

Although education alone cannot eliminate health care disparities, teaching institutions should develop adaptive, cross-cultural education on a broad array of vulnerable populations and convey useful strategies that may help medical students address disparities in their future careers. To do this effectively, medical education must adapt to students’ ever-changing knowledge base while understanding students’ prior exposures and backgrounds in relation to underserved populations. Continuous assessments of educational needs may help to inform disparities curriculum development and drive a more tailored approach to address knowledge gaps among students. Cross-cultural education and training for medical students are critical first steps for developing effective physician advocates for underserved patient populations and helping to eliminate health disparities.

Financial Support: This work was funded by the Health Resources and Services Administration (HRSA) of the US Department of Health and Human Services (HHS) as part of a Primary Care Medicine and Dentistry Clinician Educator Career Development Awards Program, Grant Number K02HP30821. The views expressed in this publication are those of the author(s) and do not necessarily represent the official views of, nor an endorsement by HRSA, HHS, or the US Government.