Debates are a pedagogical alternative to traditional journal clubs for literature evaluation in health professions education. They have been used in multiple silos of health care education at a variety of learner levels.1-21 Debates can introduce complex and controversial issues and improve clinical knowledge acquisition, communication, critical thinking, and teamwork.2 Interprofessional education (IPE) is a vital component of health care education to "prepare future health professionals for enhanced team-based care of patients and improved population health outcomes."22 To improve education surrounding literature evaluation and expand IPE, a family medicine residency program and school of pharmacy collaborated to develop and implement interprofessional clinical debates (ICDs). The goal of this activity was for postgraduate year-3 family medicine residents (PGY-3s) and fourth-year pharmacy students (P4s) to collaborate in literature evaluation and provide an engaging alternative to journal clubs. Despite the reported effectiveness of debates in individual health care education disciplines, little information exists regarding an interprofessional approach to debates. The objective of this study was to assess the impact of ICDs on attitudes toward interprofessional teams.

The Auburn University Institutional Review Board deemed this project exempt from review as an anonymous educational survey conducted in an established educational setting. Participants were PGY-3s and P4s who participated in ICDs from August 2017 to April 2019. Teams consisted of two to four P4s and one PGY-3. Team roles included lead debater to present the opening argument, rebutter(s) to ask and answer questions, and closer to present the concluding statements.

ICD topics were controversial clinical questions with two competing viewpoints, the absence of a clear right answer, and evidence supporting both sides (Table 1). These were scheduled monthly during spring and fall. Teams were evaluated with a rubric based on course requirements on their opening argument, questions, rebuttal, and closing arguments, as well as presentation style, persuasiveness, ability to answer questions, written summary, and bibliography. The ICD format is represented in Figure 1.

We administered electronic presurveys at the beginning of the 2017 and 2018 academic years. Presurveys included demographics and the Student Perceptions of Interprofessional Clinical Education–Revised instrument (SPICE-R2) to measure attitudes toward interprofessional teams and care.24 The 10-item survey is on a 5-point Likert scale from 1=strongly disagree to 5=strongly agree. It includes three subscales: Interprofessional Teamwork and Team-based Practice (T-subscale, 4 items), Roles/responsibilities for Collaborative Practice (R-subscale, 3 items), and Patient Outcomes from Collaborative Practice (O-subscale, 3 items). We selected the SPICE-R2 because it fit study objectives, is concise, has demonstrated reliability, and can evaluate IPE perceptions from a pre/postperspective. Following ICD participation, we administered postsurveys, which included the SPICE-R2 and author-generated questions related to perceived literature evaluation, problem-solving, critical thinking, teamwork and communication skills, and preferences for ICDs versus journal clubs. These questions were adapted from published literature on clinical debate perceptions in pharmacy students.11

We included matched responses in the final analysis. We evaluated baseline characteristics and skills perceptions by descriptive statistics. We established reliability for the SPICE-R2. The Cronbach α for the overall instrument was good (0.89) and ranged from acceptable to good for each subscale (0.79 to 0.85), indicating adequate internal consistency. This was similar to or slightly higher than the reliability of the overall instrument (0.79) and subscales (0.68 to 0.85) established with the validation of the instrument.24 We tested responses on the SPICE-R2 for normality with the Shapiro-Wilk test, revealing nonnormal distribution. We analyzed changes in matched responses on the SPICE-R2, including subscales, with the Wilcoxon Signed-Rank Test. We conducted subgroup analyses for PGY-3s and P4s. We considered P values <.05 to be statistically significant. We conducted statistical analyses using SPSS v25.0 (Armonk, NY). 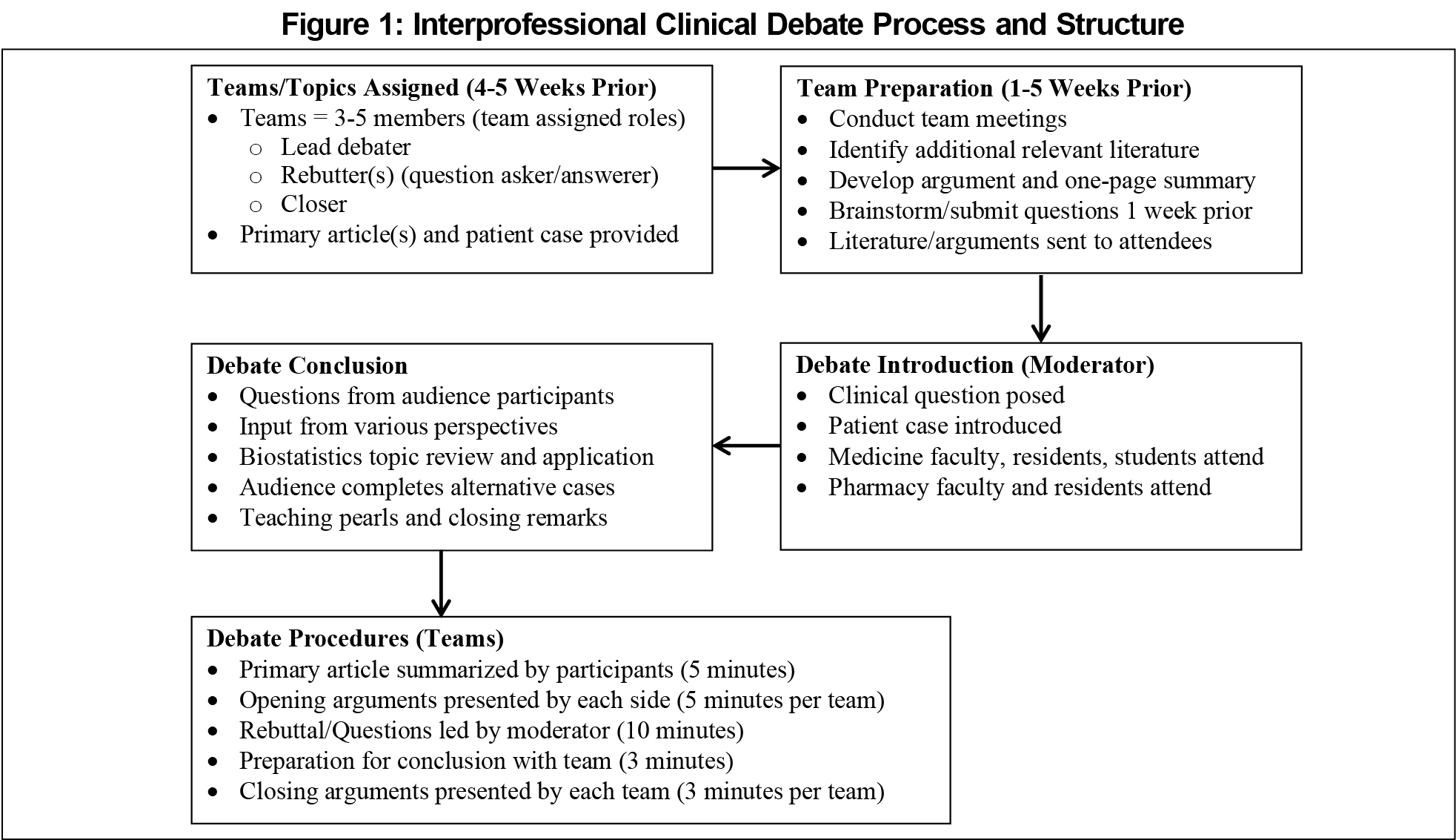 Over 2 years, 65 learners participated in 11 ICDs, including 22 PGY-3s and 43 P4s. Forty-one participants responded to both the pre- and postsurveys (response rate 63%), including 10 PGY-3s (24.4%) and 31 P4s (75.6%). Twenty-five were female (61%), and the average age was 27±3.4 years. At baseline, participants had positive attitudes toward interprofessional teamwork with median responses of “agree” or “strongly agree” on summative and subscale scores on the SPICE-R2.

Results of the SPICE-R2 are displayed in (Table 2). There was significant improvement in overall SPICE-R2 scores from the presurvey to postsurvey (P<.001). There were significant improvements in R-subscale and O-subscale scores (P<.001), but not T-subscale scores (P=.052). When analyzing subgroups, there were significant increases in overall SPICE-R2 scores (P<.05). Results of the skills perceptions survey are displayed in (Table 3). Overall, learners felt ICDs improved their ability to analyze clinical literature and/or work in interprofessional teams; however, they were neutral in their preference of ICD over journal clubs. 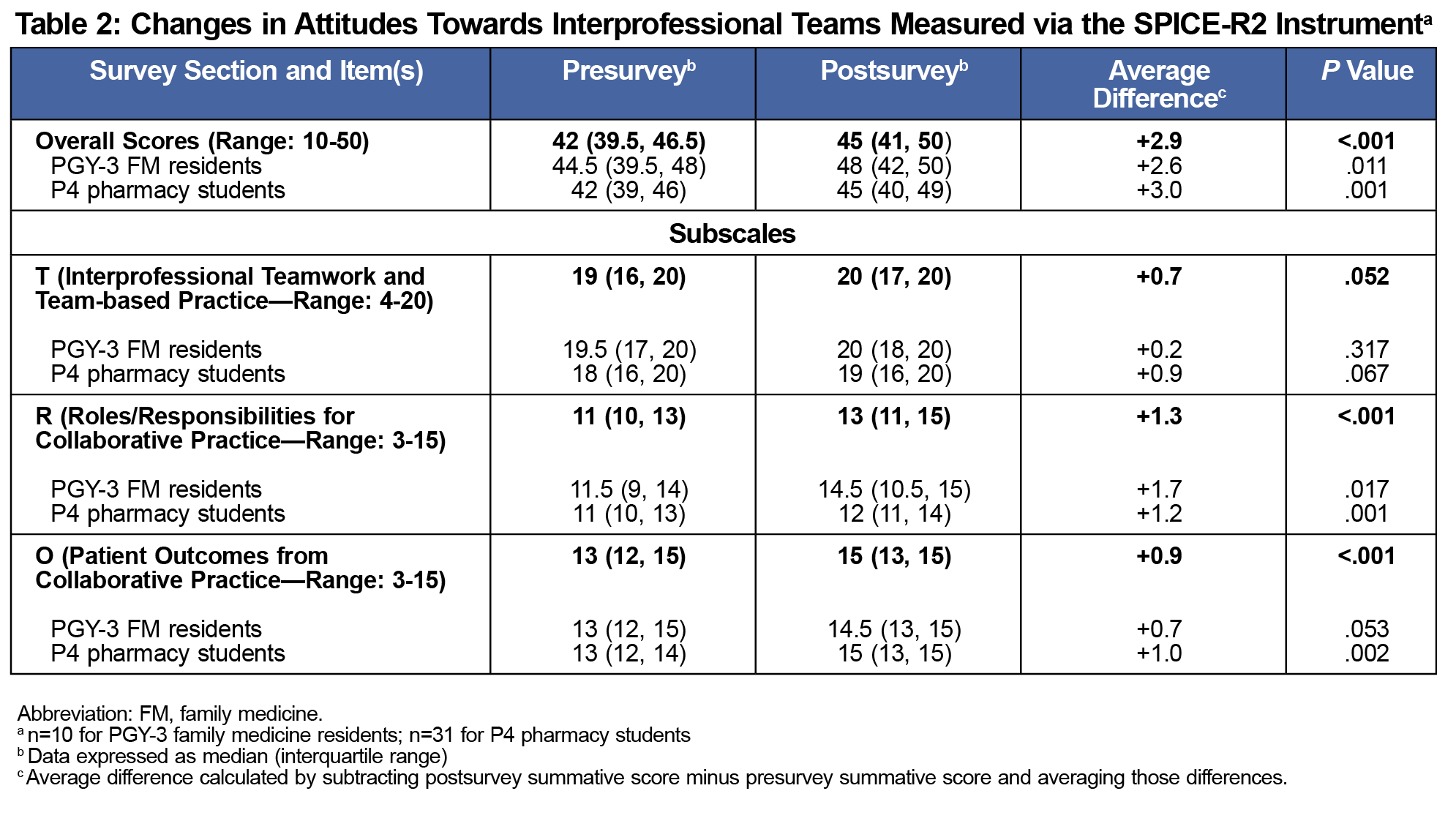 ICDs were an engaging activity that demonstrated modest, but statistically significant improvements in attitudes toward interprofessional teams in both PGY-3s and P4s. These findings were despite baseline positive attitudes, and was likely influenced by the process of meeting multiple times during the 5-week period to research and develop their arguments. This provided opportunities to discuss their background and education, roles within health care teams, and develop a well-thought-out therapeutic plan as a team to defend their stance during the debate. This likely influenced improvements in overall SPICE-R2 scores and the R- and O-subscales. We did not see a significant improvement in the T-subscale, likely because of high baseline scores. In addition, most participants thought ICDs were educationally valuable as they perceived a positive impact on their literature evaluation, problem-solving, critical thinking, teamwork, and communication skills. To our knowledge, this is the first study of its kind to include an interprofessional approach to debates in health care education.

Most matched surveys were represented by P4s; however, this was representative of overall participation in the ICD activity. Subgroup analyses indicated results were consistent for both groups. Furthermore, the sample transverses 2 years, which improves generalizability. Variable experiences during their training may have impacted survey results; however, the postsurvey was administered immediately after the debate to focus on this activity. Other factors potentially influencing survey results included time during the academic year, baseline ability to evaluate literature, public speaking comfort level, and differences in team dynamics and personalities.

Despite ICD’s perceived benefit, approximately one-third of P4s indicated they preferred traditional journal clubs, one-third indicated no preference, and one-third indicated they preferred ICDs. This sharply contrasted with PGY-3s, who mostly preferred ICDs. This may be explained by the large time commitment for preparing a debate or fear of presenting to large groups, both of which PGY-3s may be more accustomed to. Furthermore, the team roles taken may have influenced learners’ preference of ICD compared to journal clubs. For example, P4s often took the role of rebutter, a difficult role which requires more improvisation and ability to think on their feet. Depending on their experience, this may have influenced their perception of ICDs. Additionally, P4s worked toward a numeric grade, whereas PGY-3s were only required to pass the assignment.

Other potential limitations exist. First, the SPICE-R2 tool was generated primarily for early learners.24 Additionally, the survey consists of all positive statements, introducing potential for response bias. Despite these limitations, our survey results demonstrated good internal consistency, and observed changes, although modest, were similar to previous studies.25-28 Furthermore, this reflects one activity and could be used in conjunction with other IPE activities to improve learners’ interprofessional teamwork perceptions. Finally, the postsurvey perception questions were not validated prior to administration. However, these questions were adapted from prior literature and were only meant to identify trends. In sum, these findings echo results from other studies in health care education debates, demonstrating effectiveness in developing communication, critical thinking, and teamwork skills.2

Overall, learners who participated in ICDs reported improved attitudes toward interprofessional teams after the activity. Although there are challenges to implementing ICDs, the results demonstrate ICDs are effective.