Results: Response rate was 57.1%. Less than half of PDs reported adequate parenting support structures in their program (46%). Over 40% of PDs reported that 81%-100% of female residents who take parental leave end up extending their residency training, the most common response category. PDs did not report gender-based differences in performance of parenting residents. PDs most often reported significantly worse well-being for female parenting residents but perceived improved well-being of male parents.

Physicians are becoming parents during or prior to their residency training at increasing rates.1 A recent survey of residents and fellows (three sites, 644 respondents across 269 programs) reported that nearly half either had children or were expecting their first child, and up to a third were planning to add to their family.2 Parenthood entails many responsibilities that place demands on parents’ time as well as their cognitive and emotional resources. A recent survey of US physicians found that over 46% perceived that their career had a negative impact on their children.3 Another survey of residents at a Midwest academic institution reported significant neglect of hobbies, family life, and social life that was more pronounced among residents with children than those without.4

Previous research in family medicine and other specialties has documented resident dissatisfaction with factors associated with pregnancy and childbirth, including length of maternity leave, childcare arrangements, and duration of breastfeeding.1,5 The American Academy of Family Physicians’ (AAFP) policy on parental leave during residency training makes general recommendations regarding management of a resident’s schedule immediately surrounding the delivery or adoption of a child, but has no specific program requirements.6 In a prior study, we explored the positive and negative experiences of parenting family medicine residents at one institution beyond the newborn period.7 Results demonstrated that residents found parenting during residency to be stressful, and that they had feelings of guilt regarding inability to meet the competing demands of parenthood and their career. A recent survey of childbearing general surgery residents revealed that over half of respondents agreed with statements of career dissatisfaction related to aspects of parenting.8

In spite of the increased demands placed on parenting residents and their own reported dissatisfaction, knowledge regarding the attitudes of family medicine residency program directors (PDs) related to resident parenthood is scant. Research in other specialties raises concern, such as a recent survey of general surgery PDs that revealed a lack of organized maternity and paternity leave policies.8 In the same study, the PDs also reported a perception that becoming a parent negatively impacted work performance of female residents, and that female residents’ well-being was impacted more negatively than their parenting male peers. Similarly, a retrospective cohort study of internal medicine residents revealed that performance evaluation scores of female residents decreased following pregnancy.9 The same trend was not seen for male residents with pregnant partners. This trend is particularly salient given that women comprise a growing number of medical school graduates and resident physicians.10

PDs of family medicine residency programs were questioned as part of a larger survey conducted by the Council of Academic Family Medicine Educational Research Alliance (CERA). The CERA survey methodology has been previously described.12 Our 10 additional questions were evaluated by the CERA steering committee for consistency with the overall subproject aim, readability, and evidence of reliability and validity. A subgroup of family medicine educators who did not comprise the target population pretested the questions, which were then modified based on pretesting feedback on flow, timing, and readability. The AAFP Institutional Review Board approved the project. Data were collected from September 2017 to October 2017.

The sampling frame for the survey was all Accreditation Council for Graduate Medical Education (ACGME)-accredited US family medicine residency program directors as identified by the Association of Family Medicine Residency Directors. Email invitations were delivered with the online program SurveyMonkey. Five follow-up emails encouraging nonrespondents to participate were sent after the initial email invitation. There were 549 program directors at the time of the survey. Thirteen had previously opted out of CERA surveys, and 14 additional email addresses were invalid. The final sampling frame was 522.

The 67-item survey included a set of recurring general questions as well as a set of invited questions that changed with each survey. Recurring questions described residency program characteristics including PD gender and years in position, number of non-US graduates, whether the program was university-based or community-based, geographic region, and community size. We included 10 invited items querying PD opinions about support structures for parenting residents as well as the impact of parenting on residents’ performance and well-being (see Appendix A at https://www.stfm.org/Portals/49/Documents/FMAppendix/Appendix-A-Morris-2018.pdf). We collected data regarding PD parenting status and the proportion of parenting residents in the program.

Over 40% of PDs responded that a high proportion (81% to 100%) of female residents who take parental leave at their program will extend residency as a result. One-third of PDs responded that a low proportion (0% to 20%) of female parents extend residency. Several factors were associated with extending residency (Table 2). A higher proportion of female residents extending their training was associated with location in an urban area (P=.009), larger program size (P=.046), and having a female PD (P=.007) or having children under age 18 years (P=.018). Perceived adequacy of parental support was not associated with residency extension (P=.65). 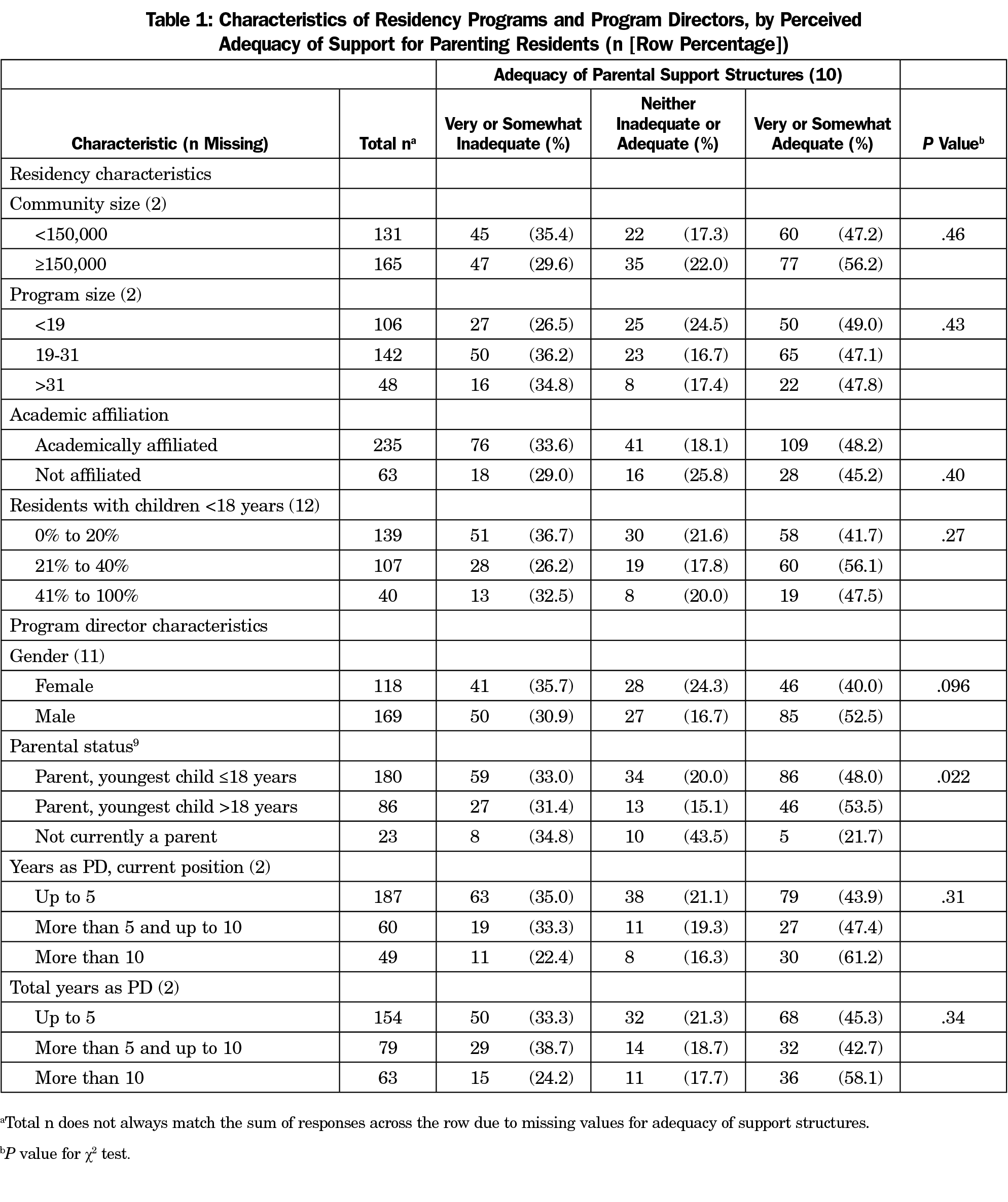 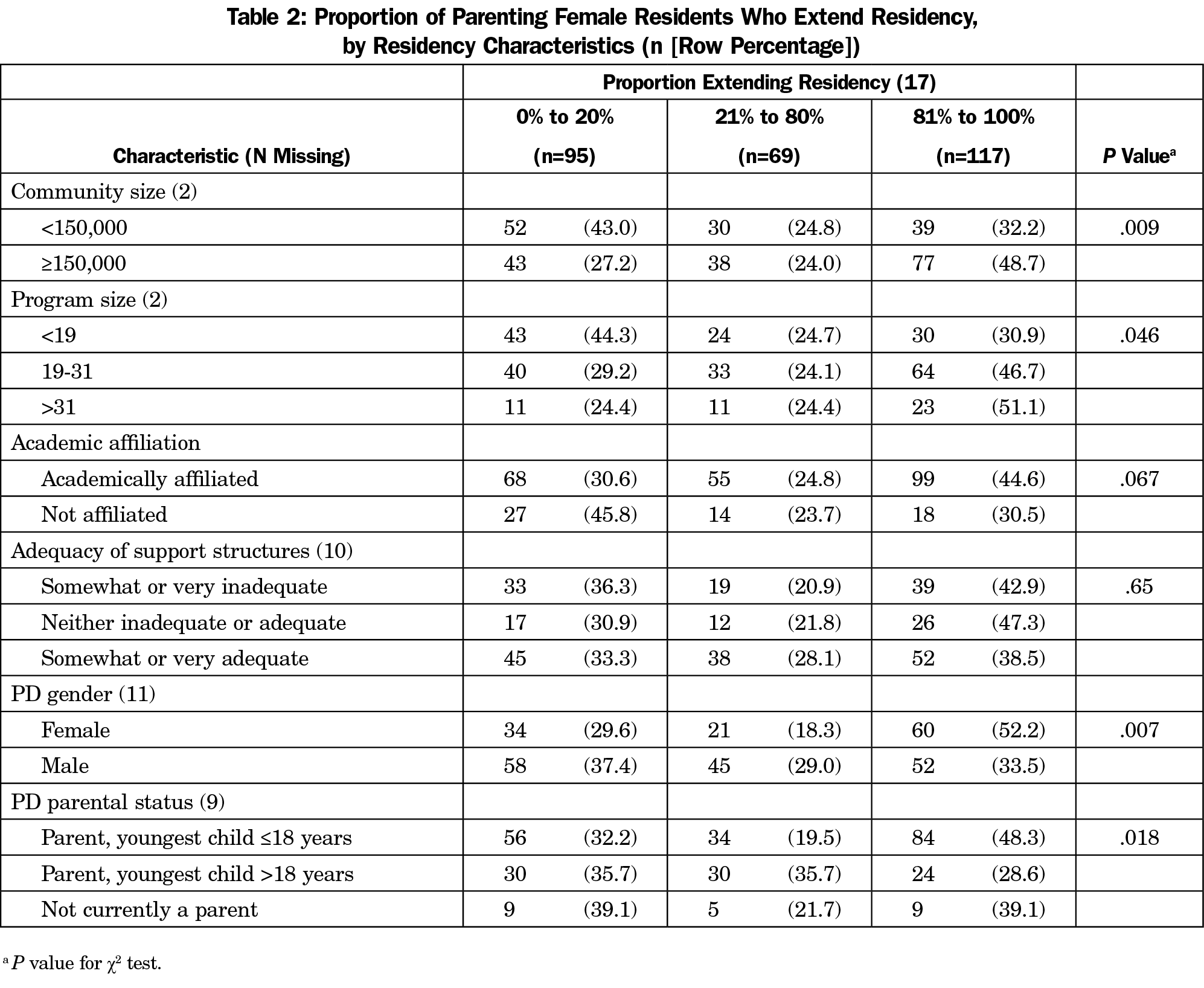 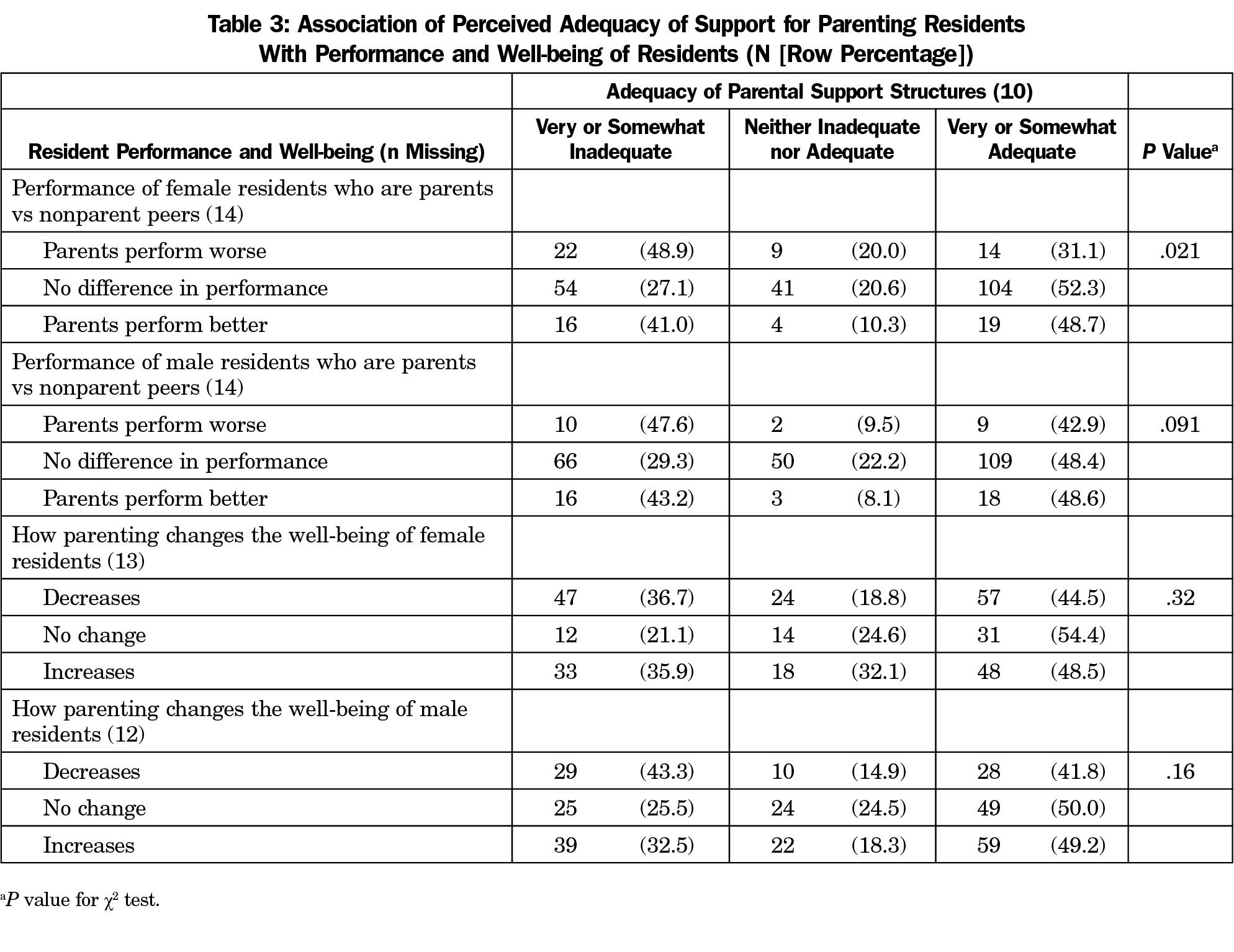 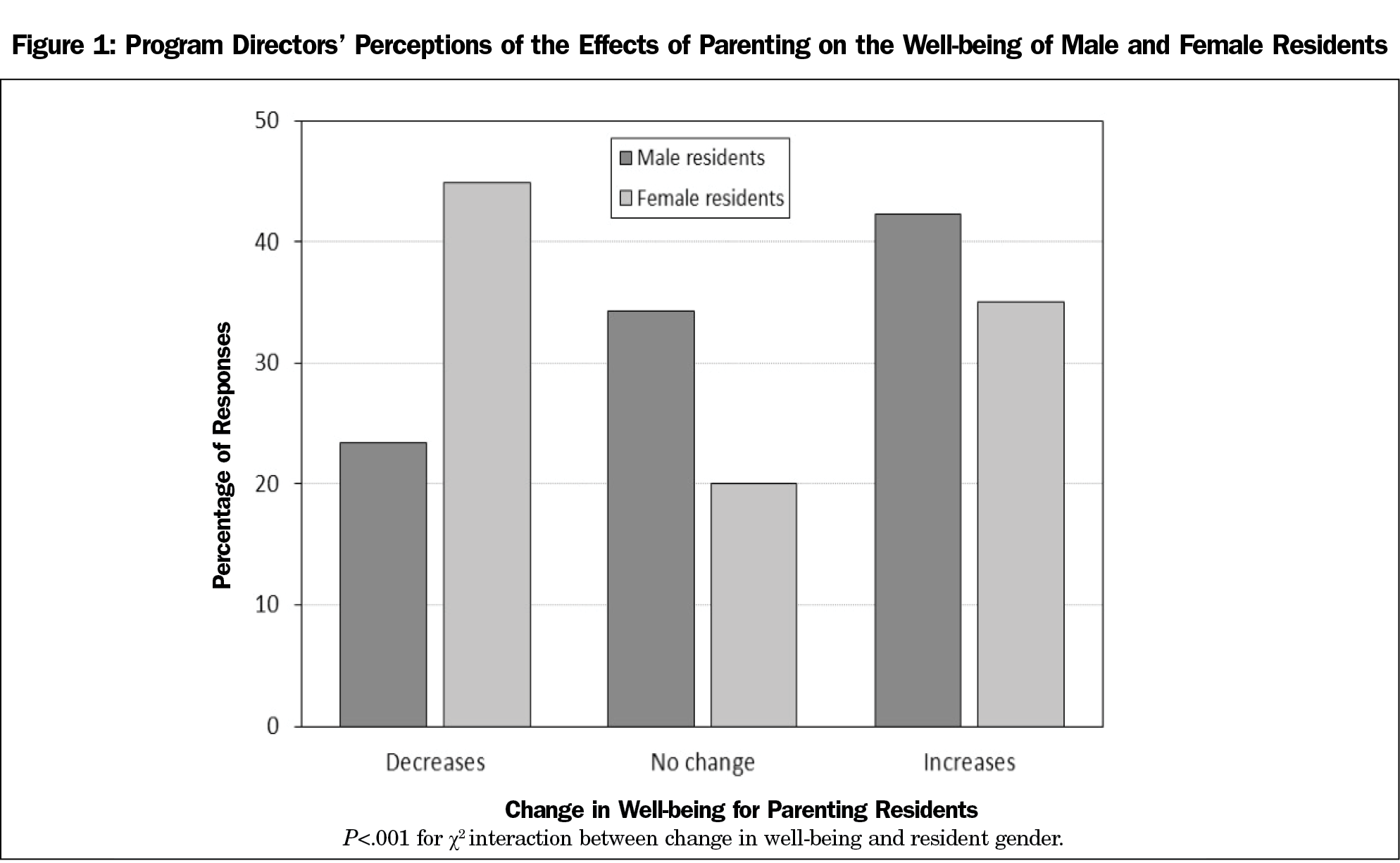 Less than half of surveyed family medicine PDs feel that parenting support structures in their program, such as on-site or ill-child daycare, flexible work schedules, or breastfeeding/pumping facilities, are somewhat or very adequate. At the same time, 49% of PDs reported at least one in five residents in their program is parenting a child under the age of 18 years. Of female residents who become parents during residency, many extend residency training to accommodate their parental leave. The lack of association between parenting support and residency extension may reflect a supportive environment that encourages residents to take longer parental leave, or it may reflect an absence of structures within the residency that allow a new parent flexibility to return to work. It is unknown if parenting residents, particularly female residents, feel positively or negatively about extending residency. This discrepancy between the needs of parenting residents and the structures available to support them is similar to previous findings.8

Given the number of residents who become parents during residency, anticipating and meeting the needs of this growing group is imperative to ensure family medicine training supports residents’ well-being and facilitates adequate learning opportunities. Programs with well established support structures may be better able to respond to the needs of parenting residents, and may be able to use these features to improve the well-being and performance of female residents in particular. The lack of specific parental leave policies has been documented across specialty training programs and is associated with career dissatisfaction in general surgery residents.1,11,13 Further studies are warranted to elucidate the relationships between other specific support structures and resident performance and well-being. Given the latitude of the AAFP policy on parental leave during residency training, further delineation of the types of resident programmatic supports available is needed. Specifically, understanding the perceptions of parenting residents of the adequacy of support structures and their own well-being may offer instruction and guidance for family medicine PDs.

This study has several limitations. First, the cross-sectional design may be vulnerable to recall bias. Nonresponse bias may have an effect if PDs who chose not to answer parenting questions differed from those who did respond. PDs may have felt pressured to respond to items rating residency characteristics or resident performance in a socially desirable way, or may have altered their responses because of a perception of personal accountability. The response rate of 57.1% limits generalizability, although responses were well distributed across demographic categories and similar to previous CERA survey response rates. This survey was limited to PDs, and these results do not reflect the current opinions of parenting or nonparenting residents.

It is unlikely that the proportion of parenting family medicine residents will decline. The results of this study can inform PDs and other residency administrators of how parenting during residency affects resident well-being, and how more adequate support structures are needed. Further study of the impact of parenting policy changes on residents’ well-being and performance is indicated.