Methods: Using an online survey, University of Toronto family medicine residents who gave birth from 2010 through 2016 were queried about their exclusive and overall breastfeeding duration, barriers, and facilitators to workplace breastfeeding, and strategies to improve the breastfeeding experience for future resident mothers. Data were downloaded from Qualtrics software and descriptive statistical analyses were conducted using IBM SPSS Statistics v.24.0. Subjective comments were examined and linked to quantitative findings.

Conclusions: Addressing long-standing barriers to workplace breastfeeding, and providing peer and educational supports were identified as strategies that could inform program policies to support future trainees’ breastfeeding goals and experiences.

The World Health Organization recommends exclusive breastfeeding for the first 6 months of life, and continued breastfeeding with solids for 2 years and beyond.1 Most physician mothers initiate breastfeeding, yet many wean early due to work-related factors.2-13 Canadian residents’ breastfeeding experiences were gathered from studies that broadly explored pregnancy and motherhood.3, 10-12 A qualitative family medicine study conducted between 1994 and 1999, when maternity leave duration was 6 months,10 and two recent studies of general surgery residents (who took 6 to 12 months maternity leave) showed that barriers to workplace breastfeeding have changed little over this time.11-12

Breastfeeding during residency is an important issue, as increasing numbers of women have pregnancies during training, and many medical students consider work-life balance when choosing residency.14-16 We sought to comprehensively examine Canadian family medicine residents’ breastfeeding experiences and determine supportive workplace breastfeeding strategies.

This descriptive, cross-sectional, anonymous, online pilot study surveyed residents’ exclusive and overall breastfeeding duration, barriers, and facilitators to workplace breastfeeding, as well as strategies to enhance trainees’ breastfeeding experiences. Some questions allowed additional comments, and final comments were welcomed (see Appendix A at https://journals.stfm.org/media/2430/appendixa-al-imari.pdf). Questions were adapted from earlier studies,2,4-9 and pilot tested by two medical students and a trainee who gave birth during residency and was not a study participant. Eligible participants included 179 female family medicine residents from the University of Toronto who gave birth from 2010 through 2016 and returned to residency after maternity leave. A modified Dillman approach was used to implement the survey17 using Qualtrics software, between February and March 2017. The survey link was emailed to residents by the Postgraduate Family Medicine Education Office, with four generic reminder emails occurring at 2-week intervals, and no incentives were offered. Data were downloaded as an SPSS file, and descriptive statistical analyses were conducted using IBM SPSS Statistics v.24.0. Thirty final comments and 12 others that clarified reasons for stopping breastfeeding (question #13), were reviewed and linked by themes to quantitative findings by two investigators independently, and then collectively for consensus. The University of Toronto Research Ethics Board approved the study (Protocol ID 33843).

Fifty-six residents completed the survey (31% response rate). All were married, and most were aged 25 to 34 years, and had one child during the 2-year residency program (Table 1).

Most residents went on maternity leave for 7 to 12 months. All initiated breastfeeding; almost half breastfed exclusively for 6 months, and 40% breastfed over 1 year. About half of the residents met or exceeded their breastfeeding duration goal (Table 2).

Babies were generally 9 months old when their mothers returned to work. Almost two-thirds of residents continued breastfeeding after their maternity leave for another 4-7 months or more. All the babies’ feeding schedules were modified to accommodate work. Pumping at work (63%), modifying work schedules (31%), breastfeeding at home (20%) or at work (14%) during breaks, were rated as fairly to very important strategies to maintain milk supply. 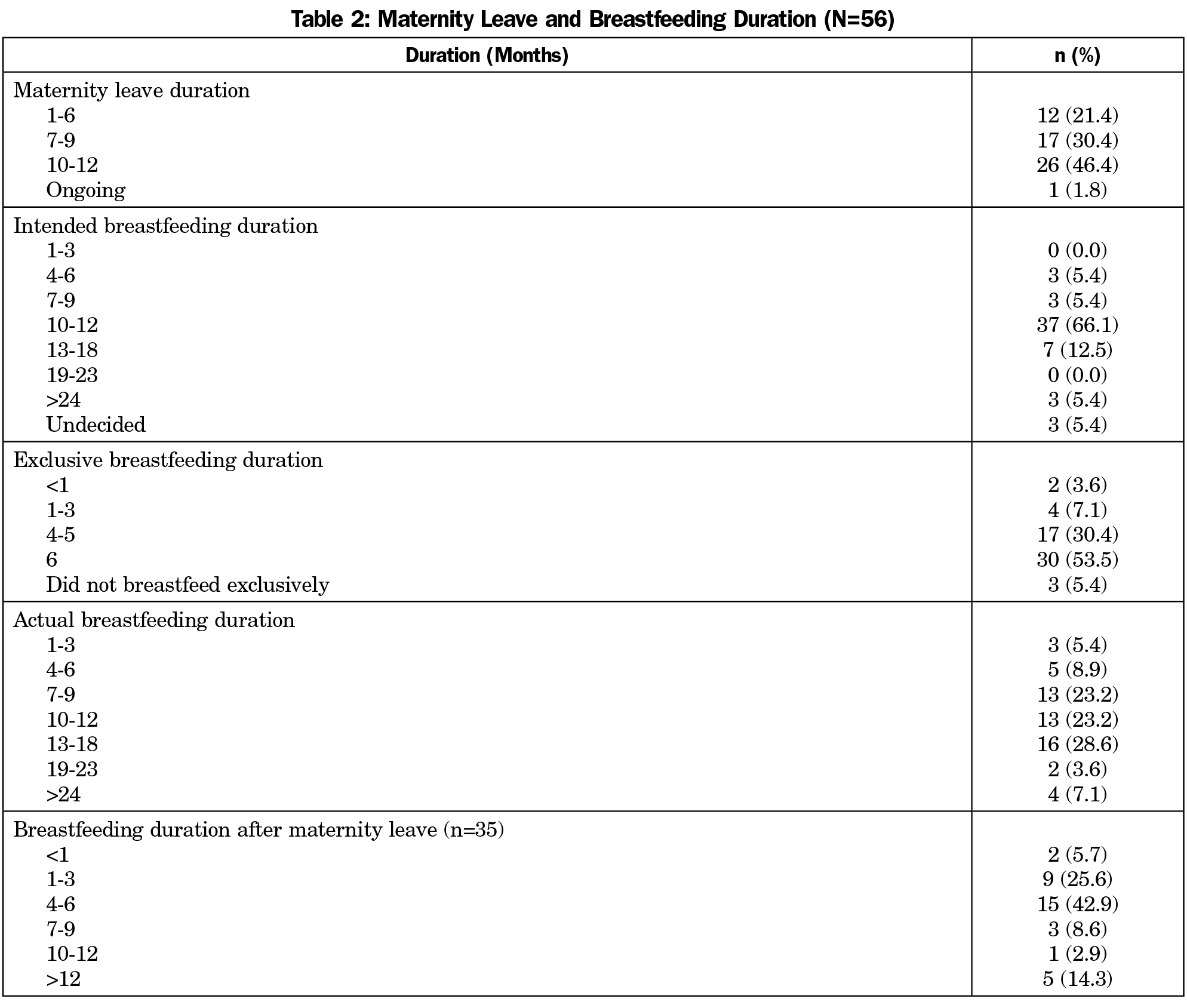 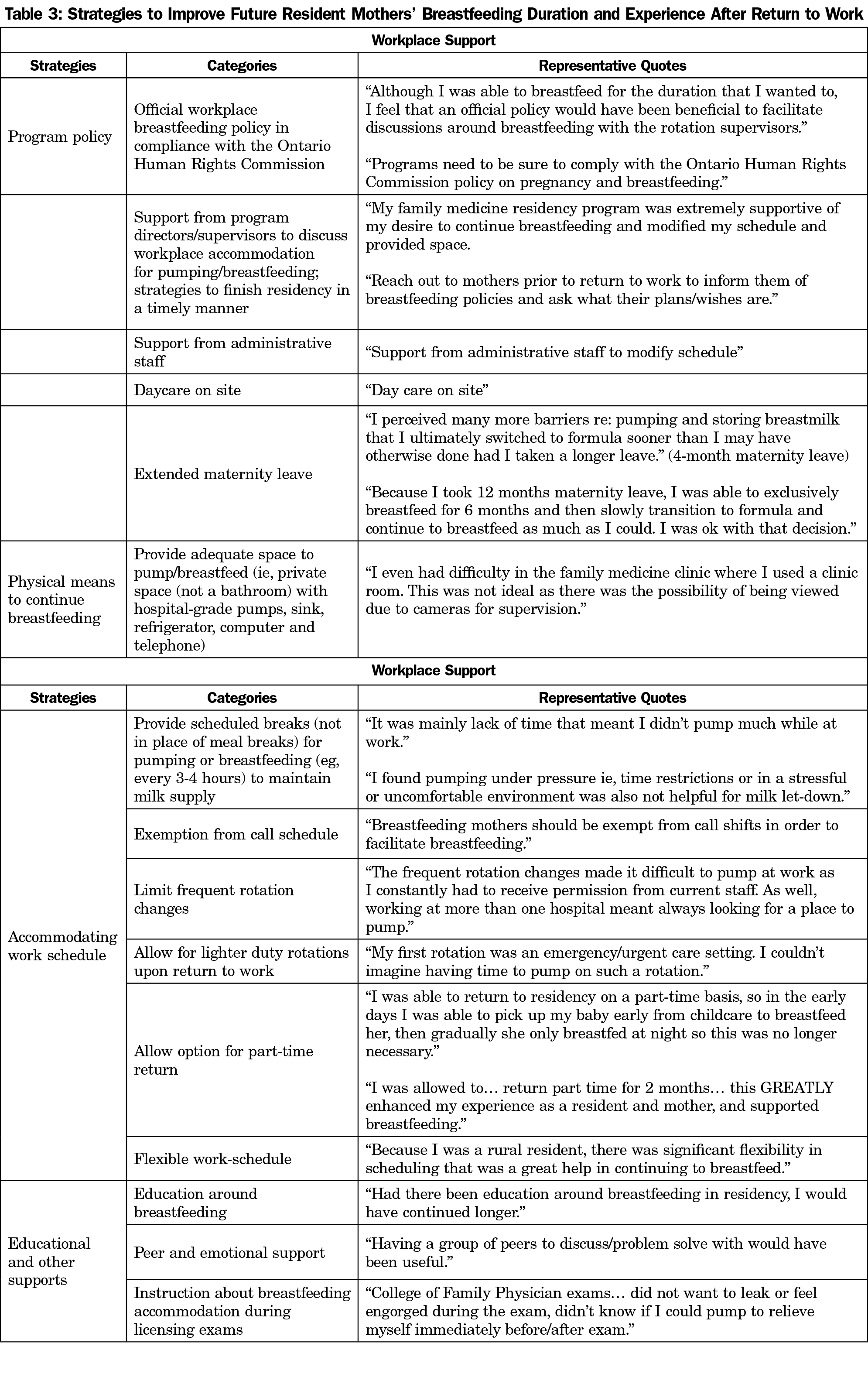 In this first study to exclusively explore Canadian family medicine residents’ breastfeeding experiences, rates of breastfeeding initiation (97%-100%), and 6-month exclusive breastfeeding (54%) were similar to those reported in earlier Canadian studies.3,10-12 Conversely, American residents’ and physicians’ initiation (mean 84%), and 6-month exclusive breastfeeding rates (mean 27%), and duration (5-9 months) were much lower.2,4-9 The contrast in breastfeeding experiences between Canadians and Americans reflects the significant difference in maternity and parental leave benefits between the two countries. The Family and Medical Leave Act provides up to 12 weeks of unpaid (sick and vacation) leave, while Canada’s standard benefit includes up to 52 weeks of paid maternity and parental leave (55% of average weekly insurable earnings).18,19 It is well established that longer maternity leave is associated with longer breastfeeding duration.20-27

Nonetheless, many North American residents and practicing physicians still face the same barriers to workplace breastfeeding as first reported 25 years ago—namely, inadequate physical space and time to breastfeed/pump due to inflexible work schedules.2-13,28 Currently, there are no breastfeeding support policies in Canadian resident employment agreements.29 To implement such a policy, residency programs could provide specific private space for breastfeeding/pumping and refrigeration for expressed milk. Program directors and residents could develop an individualized work schedule to accommodate breastfeeding by limiting frequent rotation changes, choosing lighter rotations with no overnight calls initially, working part-time, or doing a research elective after maternity leave.10-13

Developing and implementing a workplace breastfeeding policy is essential, but a cultural shift in the practice and learning environments is needed first.32, 33 In part, this requires challenging the hidden curriculum, which values subjugating personal needs to professional responsibilities.34, 35 Aligning the formal education of the importance of breastfeeding and questioning the hidden curriculum may promote the health and well-being of breastfeeding residents and their infants. Residents who did not meet their personal breastfeeding goals have reported more sadness, frustration, or depression,9 and lower work satisfaction,8,9 sentiments that were shared by some of our respondents. Evaluations of employment-based breastfeeding support programs reported less absenteeism, better job satisfaction, and higher productivity.36 Importantly, physicians who had positive experiences were stronger breastfeeding advocates for their patients.5, 9

Our study only surveyed residents from the University of Toronto, which has the largest family medicine program in Canada, with 18 teaching sites (including four rural sites). In this pilot study, our response rate was low (31%), and although consistent with online surveys, this may limit our conclusions.37, 38 Unfortunately, we have no information on nonresponders. However, we believe our results are still generalizable, because similar studies since the mid-1990’s have reported the same findings, namely that resident and physician mothers still face the same barriers to workplace breastfeeding.  We do acknowledge that self-selection bias was likely, as residents whose own personal breastfeeding experiences were strongly positive or negative, may have been more likely to participate. Recall errors were also possible, since some residents breastfed their infants almost 7 years ago. In a future Canada-wide survey, we will compare family medicine and specialist residents’ breastfeeding experiences and examine the role of partners and the new Canadian 18-month extended parental leave on maternity leave duration and time to return to full-time work.

Implementing well-established workplace breastfeeding strategies would support future residents, as well as other working mothers in the health care field as they juggle professional priorities with motherhood.

The authors thank the Women’s College Hospital Family Practice Peer Support Writing Group, in particular, Dr Nicholas Pimlott for reviewing the manuscript and providing invaluable feedback and comments. They also thank Dr Mary Ann O’Brien for her expertise on qualitative methodology and for reviewing the draft.

Affiliations: Department of Family and Community Medicine, University of Toronto, Toronto, ON, Canada