Background and Objectives: Academic promotion is critical in academic medicine. Traditionally, peer-reviewed journal articles have been at the core of advancement deliberations. With the increasing prominence digital content and social media, an increasing number of academics have begun linking their scholarly value with their online activities. It is unclear whether and how US academic medical institutions have updated their promotion criteria to reflect the changing environment and digital practices of faculty members.

Methods: We reviewed publicly available advancement and promotion policies and faculty handbooks of 148 allopathic medical schools in the United States (April 2018 through September 2018), to see if social media was explicitly included in their scholarship criteria.

Results: Of the 148 allopathic institutions only 12 (8.1%) stated that digital and social media products would be factored into the scholarship and/or other domains of the promotion application. There were no associations between acceptability of social media in the tenure process and schools’ characteristics.

Academic promotion is critically important to those in academic medicine. The process involves rigorous reviews by committees that generally consider three domains: clinical care, research and education.1-3 Traditionally, scholarly output in the form of peer-reviewed journal articles has been at the core of committee deliberations, looking at publication metrics such as the journal’s prestige (measured by its impact factor), and the number of citations, among others.

Alternative metrics (known as “altmetrics”) seeking to measure the impact of scientific output beyond the academic world,4 are gaining acceptance, as an increasing number of academics contribute to scholarship via digital means: blogs, podcasts, social media, and online publications.5

In 2016, the Mayo Clinic Academic Appointments and Promotions Committee announced that they would be including digital and social media scholarship in academic advancement considerations,6 reflecting a trend of academics who have begun linking their scholarly value with their online activities.7-10

Few studies have evaluated the attitudes of academic leaders about using digital scholarship for promotion, and results have been mixed. A survey of medicine and pediatrics department chairs11 showed that only 23% perceived blogging as an important effort. Other studies showed more positive attitudes towards the use of social media in tenure,4 though concluded (in 2012) that use of social media is “not widely recognized by most research institutions as part of their tenure and promotion review process.”8

Years later, with thousands of physicians engaged in social media, it was still unclear whether academic institutions have updated their promotion criteria to reflect the changing environment and digital practices of faculty members.

We reviewed publicly available promotion policies of 148 allopathic medical schools in the United States between April 2018 and September 2018 to see if digital scholarship or social media were explicitly included in their criteria. Handbooks reviewed were for the 2018-2019 academic period. We reviewed the medical school’s public websites, searched faculty affairs pages for each school’s requirements for promotion and advancement. Search terms included “Web 2.0,” “digital,” “scholarship,” “social media,” “electronic,” “epublication,” “Twitter,” “Facebook,” “(micro)blogs,” and “Podcasts”. Schools with multiple campuses were assessed separately if a unique policy or faculty handbook existed.

To look for an association between the school’s characteristics (rural/urban, designated region, private/public) and the inclusion of digital scholarship in academic promotion we used multinomial regression with a subsequent analysis of variance (R Core Team; [Software program]; 2020).

Ambiguous schools used the following terms: “creative activities,” “electronic media,” publications would be viewed in the “broadest review,” or items would be reviewed on a “case-by-case basis.” Others did not explicitly state that non-peer-reviewed journals/ digital scholarship/social media would not be included for consideration. 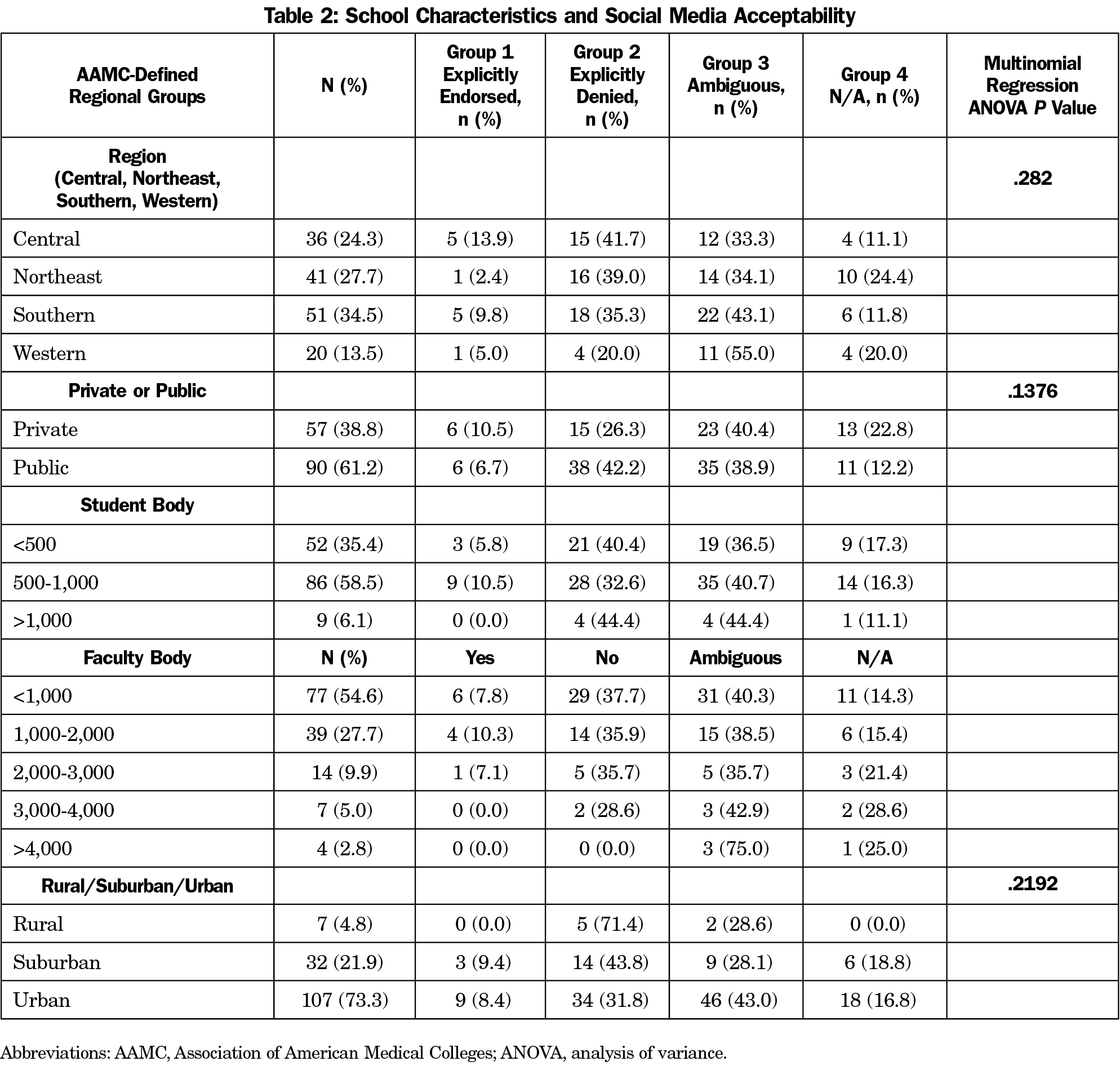 Digital scholarship has the potential to disseminate content to peers and colleagues rapidly and efficiently, as well as to members of the public. The importance of such channels of communicating medical and health information has been on display during the COVID-19 pandemic, where scientists from around the world bypassed the long delays of scientific publications and provided critical information through social medial and digital formats. Pre-COVID, such dissemination efforts, however, have rarely been seen as worthy of recognition through academic promotion processes.

Our descriptive project is the first to show that most medical schools are still using guidelines established nearly 3 decades ago, and only 8% explicitly included digital scholarship as part of promotion considerations. Though the landscape has been changing, it is likely that one of the reasons why so few institutions explicitly endorse digital/social media for promotion is because there is no consensus about what constitutes digital and social media scholarship appropriate for promotion, in terms of which formats merit inclusion, or how to assess quality, though efforts are underway to create benchmarks. Table 3 summarizes open questions medical institutions should consider when developing such promotion criteria.

Including digital scholarship in faculty promotion would reflect growing trends in scholarly dissemination and highlight the importance of public and professional discourse via less traditional and less exclusionary avenues.

Our study has several limitations. First, it was a point-in-time evaluation; it is possible that these policies have changed or are undergoing change since we last reviewed the websites. Schools that explicitly endorsed or were ambiguous to including digital scholarship did not indicate how much weight these publications would hold in promotion decision; 16% of medical schools were categorized as N/A, because we were unable to gain access to their materials, which does not mean that these policies do not exist. Some schools may have internal documents/handbooks that we did not have access to, and therefore it is possible that we mischaracterized the number of institutions that were actually including digital scholarship in their academic promotion criteria.

In recent years other factors have been recognized as important to academic promotion, such as the creation of educational activities, leadership, innovation, quality improvement projects, implementation, and administrative efforts. We believe that the creation of digital content should be included as well, as it represents and captures many of these domains, from creativity and innovation, to leadership to dissemination statistics. We live in a world where the public, multiple stakeholders, and global decision makers rely on information sent and received through digital channels. Doctors, medical educators, and academics have become major players, content creators and curators of health information, and trend setters in highlighting critical issues in medicine and health through social medial and digital formats.19 Medical organizations and conferences have fully embraced the importance of information dissemination through digital and social media channels.20,21

Rather than ignore this reality, medical institutions should lead the way to finding solutions that both recognize the changing landscape of scholarly work, as well as adhere to quality standards. 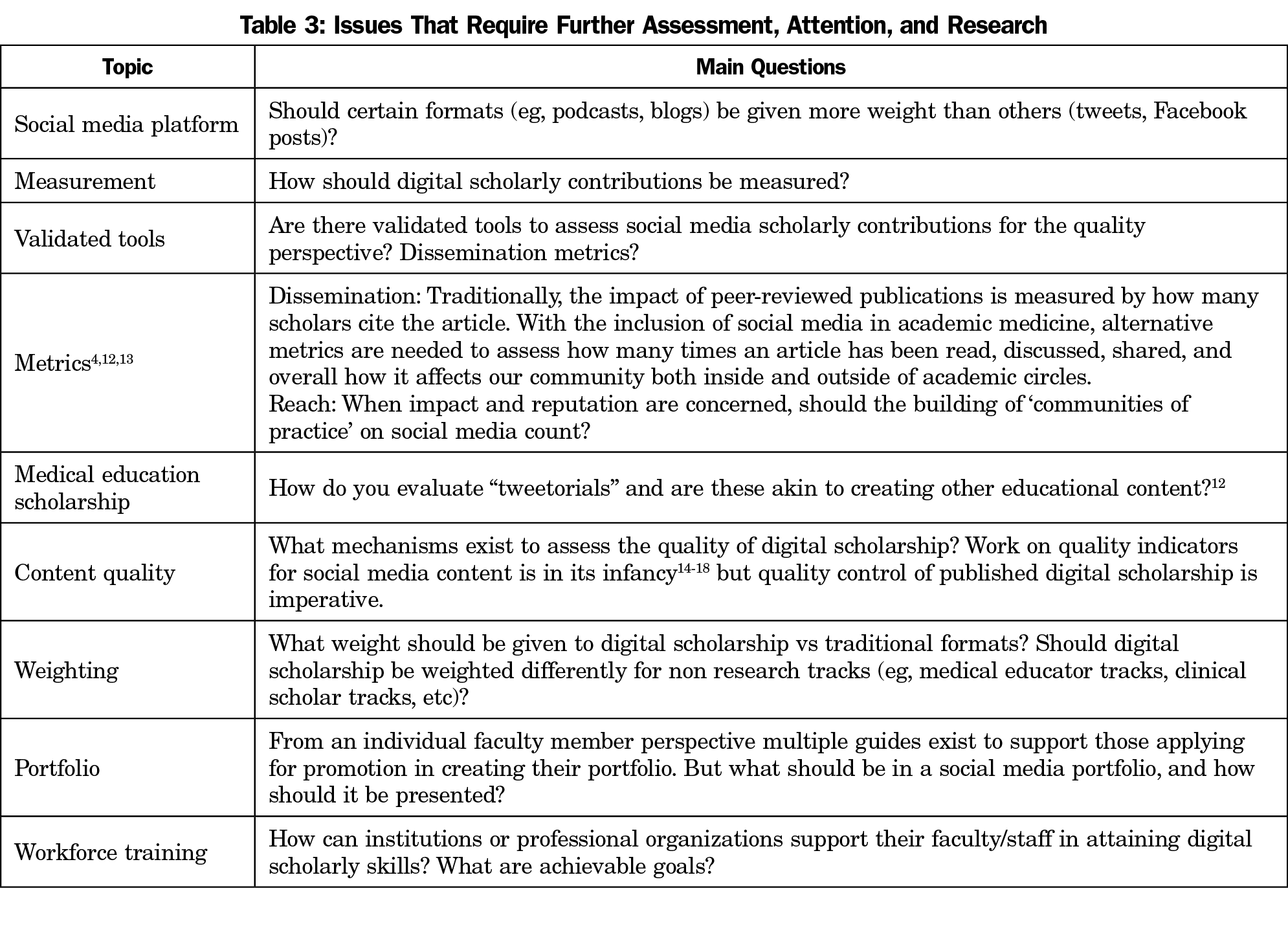