Introduction: This study characterizes the risk for unintended pregnancy among Latino men and women within a racially and ethnically diverse county in Michigan.

Conclusion: Among Latinos in a nonmetropolitan community, both men and women were at high risk for unintended pregnancy. Future studies that address the reasons behind this elevated risk may inform potential interventions among this at-risk group.

Nearly half of pregnancies nationally (45%) and more than half of pregnancies in the state of Michigan (54%) are unintended, defined as any pregnancy that a woman reports was not desired at the time it occurred.1,2 Unintended pregnancy is a significant public health concern because of the associated health and social consequences to mother and child,3,4 and represents a significant cost to the nation.5

The Centers for Disease Control’s (CDC) National Survey of Family Growth published in 2006 indicates that 34% of births in the previous 5 years were unintended (defined as “unwanted” or “mistimed”) by Latino men,9 compared to 48% for Latina women.10 However, much of this national data has been collected from Latinos living in large metropolitan areas and may not represent the large proportion of Latinos that live in nonmetropolitan areas.11 Washtenaw County, MI, has a population of 344,791 reported by 2010 CDC data. The largest racial/ethnic groups are white (74.5%), black/African American (12.7%), Asian (7.9%), and Latino/Hispanic (3.5%).12 The aim of this study was to build on this existing national data with community-level findings on the current risk for unintended pregnancy among Latino men and women in a nonmetropolitan county.

Encuesta Buenos Vecinos (EBV, “Good Neighbors Survey”) is a community-based participatory research project that administered a health survey of Latinos in Washtenaw County, MI. To obtain a representative sample based on estimates of the population size (12,000 to 15,000), nearly 500 Latino men and women were surveyed anonymously via either a paper survey (distributed door-to-door or available in community meetings at various community centers) or an online survey (distributed via community email listservs or through social media sites). Self-identified Latino respondents aged 18 to 50 years were included in the sample.

The survey was administered in English or Spanish by trained, paid community members to respondents between September and December 2013. Data collected included sociodemographic characteristics, intentions regarding future childbearing, and use of any contraceptive method, in addition to other health and community-related data. The sample composition was monitored for representativeness of the local population to ensure external validity.

Risk for unintended pregnancy among all respondents was determined by using two questions from the survey: “How do you feel about having a child now or sometime in the future?” and “Are you or your partner doing anything now to prevent pregnancy?” Respondents who indicated no desire to have a child or a desire but greater than 1 year from now and no current use of any contraceptive method were coded as “at risk” for unintended pregnancy.

Descriptive statistics were used to determine the characteristics of the sample. Multivariate logistic regression was used to determine any association between risk for unintended pregnancy and sociodemographic variables.

This subanalysis of EBV data was deemed exempt from review by the University of Michigan Institutional Review Board.

Our sample (n=341) included 57% women and 43% men with mean ages 31.3 and 32.7 years, respectively. There were no significant differences between men and women in regards to education, marital status, and number of children (Table 1).

Analyses were limited to men ages 18 to 50 for ease of comparison with women respondents. As men can contribute biologically to a pregnancy at nearly any adult age, a sensitivity analysis was performed that included older men; results did not differ from those reported. 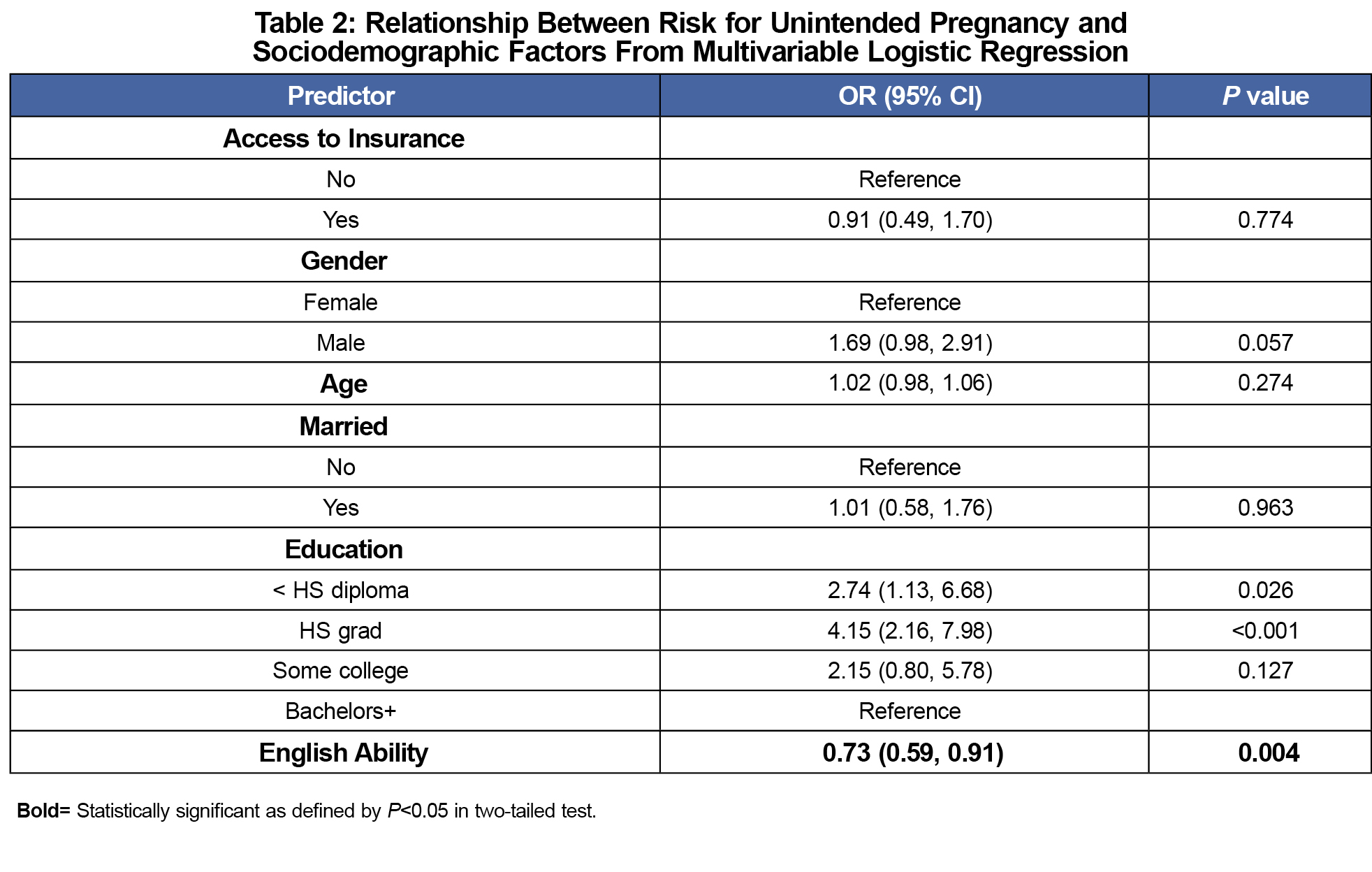 Compared to the risk for unintended pregnancy among Latina women nationally (10%), the risk among our female sample from a diverse nonmetropolitan county is significantly higher (59%). The risk for Latino men in our sample is even higher (67%). This builds on existing national data by characterizing risk for unintended pregnancy for Latino men and women in the same nonmetropolitan community and has several implications.

First, although it is possible that respondents in our survey chose not to prevent pregnancy despite not wanting to become pregnant, these findings suggest a need for increased attention to possible barriers to contraception use among the many Latino men and women in nonmetropolitan communities. Latinos in these communities may be reluctant to advocate for necessary health care due to concerns regarding legal residency status. Nonmetropolitan communities often lack the resources of larger metropolitan communities, including language-concordant health care providers and facilities. This may help to explain lower odds for risk of unintended pregnancy among Latinos who speak better English and have completed more education. Latino men and women living in nonmetropolitan communities may also experience lower neighborhood social cohesion due to lower concentrations of Latino community members or fewer culturally appropriate community resources, increasing their risk of poorer physical and mental health.13 Men may be at particularly high risk in this community due to many factors ranging from cultural norms that defer contraceptive choices to women, to health care provider tendency to screen only women for pregnancy intentions and contraception use. Further in-depth studies are required to fully understand this phenomenon.

Next, interventions that incorporate education and direct patient care that include men may be vital in reducing risk for unintended pregnancy in these groups. Policy changes that include improved access to male-specific contraception may also reduce risk. Several programs to improve access to contraceptives for uninsured or underinsured women currently exist in Washtenaw County, MI. However, none of these extend coverage to men, making access to services such as vasectomy unattainable for many.

Although the EBV is the largest needs assessment of Latinos to date in Washtenaw County, our findings should be considered with the following limitations. Our sample was drawn from one diverse Michigan county and may not be generalizable to different populations. Also, our results depend on self-report from a large survey intended to garner diverse data about health status and behaviors, but not limited to reproductive behaviors or attitudes. While this can be considered a limitation, it also minimizes the effect of desirability bias, making our findings more conservative and thus likely more reliable.

Our study adds new information regarding the risk for unintended pregnancy among Latinos that live in nonmetropolitan communities. Interventions that focus on men and women as equal agents in family planning may help to reduce unintended pregnancy among Latinos in Washtenaw County, MI, and other similar nonmetropolitan communities.

The authors thank Dr Patricia Mullan for her review and consultation of this manuscript.